The Sacramento Kings had to fly home from Memphis licking their wounds after losing the final three games of their four-game road. On Saturday night, the Kings dropped the final game of the road swing to the Grizzlies 119-115. The game was never as close as the final score might imply.

There were three lead changes in the game; however, the Kings never held the lead after the first quarter of the game. The largest lead of the game for Sacramento was seven points. The Grizzlies biggest lead was 17 points.

By the end of three quarters, the Grizzlies were up 91-78 over the Kings.

The Kings made a big charge in the final period as De’Aaron Fox scored 14 points while Memphis went 12 players deep to rest their starters. Sacramento outscored the Grizzlies 37-28 the fourth quarter but came up four points short of winning the game when the final buzzer sounded.

3-point baskets made the difference

The Kings shot just 30.6% (11-for-36) from behind the arc in the contest which ultimately led to their downfall.

The charity stripe was unkind to SAC

The Kings went to the line 24 times but hit only 18 shots.

The Grizzlies went 24-for-29 from the charity stripe. Those six points proved too big when the final horn sounded.

The Grizzlies will host the San Antonio Spurs on Monday night. 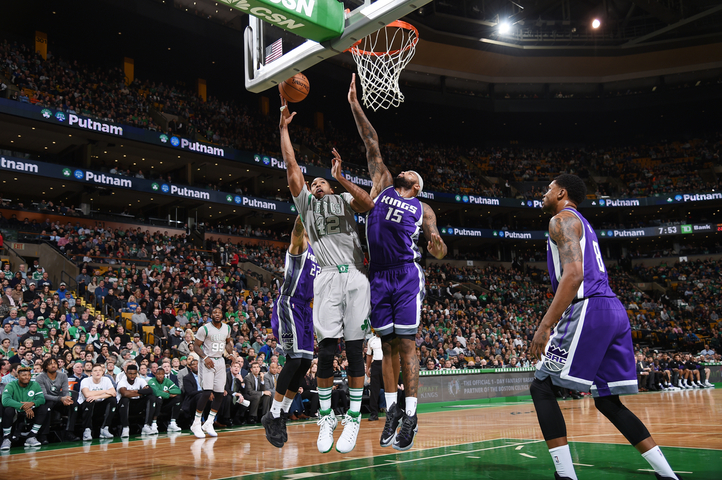 The Kings and Celtics went to war on the basketball court on Friday night in Boston. The game featured 23 lead changes and 12 ties. As those stats would imply, both teams had the opportunity to win the game. In the end, Boston led by Al Horford was able to put the “W” in the books because of their tough play late in the fourth quarter.

The Celtics won their 11th game of the season as they downed the Kings 97-92. Sacramento now drops to 7-12 on the season and 1-2 on what is now a five-game road trip.

Sacramento went with the “the big” starting lineup in this game – Koufos, Cousins, Gay, Afflalo and Collison. Boston began running away from this starting five immediately. By the 4:26 mark in the first quarter, the Celtics held a 13-point lead 24-11. Dave Joerger pulled all of his starters except Cousins and the second unit erased the deficit tying the game at 29-29 at the end of the first period.

That set up a real battle between the teams that played out in second, third and part of the fourth quarters.

With 7:54 to go in the game, Al Horford hit a hook shot that tied the game and the Celtics eventually went on a 10-0 run that created a major uphill battle for the Kings. Sacramento led by Cousins tried to fight their way back into the game and did cut the Celtics lead to three points with 39 seconds remaining in the game. The Kings were unable to score again in those final seconds and lost the game.

Late in the third quarter, Ty Lawson and DeMarcus Cousins were both going for a defensive rebound when Lawson’s left elbow hit Cousins above the left eye. The blow opened up a cut above Cousins’ left eye. He was taken to the locker room where they glued the cut shut and he returned to the game with under eight minutes to play in the fourth quarter.

Was that the turning point in the game? No, it was not. Read the next section and you will understand why it was not the key to the loss.

“We just shot ourselves in the foot. We turned the damned thing (the ball) over like I’ve never seen.We take bad shots sometimes and it just ticks me off. At bad times … stuff we know we have to get better at. We’re not a bunch of rookies. We can get better. We’ll keep plugging away and keep getting better, but we shot 47 shots in the paint and missed how many layups? Turnovers killed us. Shots come and go – we didn’t make shots,” said Kings head coach Dave Joerger after the game.

Sacramento outscored Boston 42-34 in the paint but went 21-for-47 in the high percentage shooting area. The Kings shot just 37.9-percent (33-for-87) for the game. It is almost impossible to win a game in the NBA and shoot under 40-percent. Sacramento turned the ball over 15 times and those TOVs created 21 points for Boston.

Al Horford was the star for Boston in the game

Horford had a complete game for the Celtics on Friday night against the Kings. The Boston center played 35-minutes scoring 26 points, recorded eight rebounds, dished out three assists, had two steals and six -yes you are reading correctly – six blocked shots. He shot 10-for-18 from the floor and 4-for-7 from beyond the 3-point line.

Celtics head coach Brad Stevens was even more impressed with Horford’s defense. Stevens talked about how his center is always at the ready on defense. Horford did make a key defensive play on Cousins in the final seconds of the game to deny the Kings big man a 3-point shot opportunity.

The Kings have the day off in New York City on Saturday and then will face the New York Knicks in “the Garden” on Sunday at 4:00 p.m. PST in game four of the five-game road trip.

The Celtics kick off a road trip on Saturday night in Philadelphia with the Sixers assuming the floor is dry enough for play. The NBA will make sure the floor is game-ready for the Celtics and Sixers … take that to the bank.

BOSTON — The Golden State Warriors continue to be the class of the NBA.

Stephen Curry poured in 37 points, while fellow Splash Brother Klay Thompson added 20 points as the Warriors erased a 26-point lead to defeat the Boston Celtics 106-101 Sunday night in Beantown. With the win, Golden State continue hold the NBA’s best record at 46-11 and giving the Warriors their seventh win in their last nine games.

Harrison Barnes chipped in with 17 points and eight rebounds and Draymond Green scored 14 points (11 in the fourth quarter).

“This was a fun challenge for us,” said Warriors head coach Steve Kerr. “If we lost, it wouldn’t have been the end of the world. But we were down and we came back. I was happy that we showed good poise.”

“We didn’t want to be down 26,” Curry said after the Warriors played their fifth game on a six-game road trip, and the middle of a string of three games in four nights. “It seemed like it was sluggish there in the first quarter. We had to be mentally tough to make it an interesting game and close out the half.”

Golden State has won four straight versus Boston for the first time since the team moved west from Philadelphia in 1962, according to Elias Sports Bureau.

Isaiah Thomas led Boston with 20 points off the bench, and Tyler Zeller finished with 17 points for the Celtics, who saw their three-game winning streak snapped.