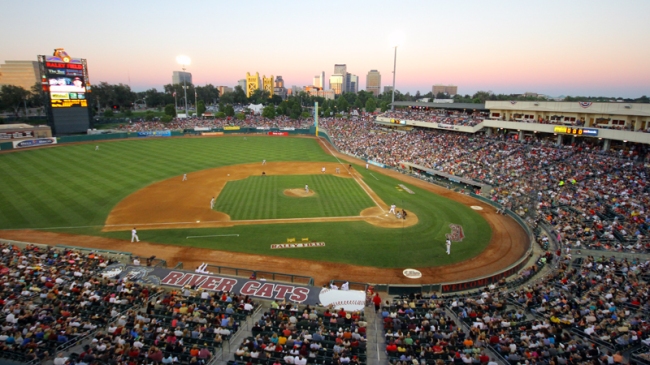 Rumors are flying that the owners of the Sacramento River Cats are looking to switch their affiliation from the Oakland Athletics to the San Francisco Giants. The rumor was first reported by the San Francisco Chronicle who cited unnamed sources.

The rumor has gained traction because the affiliation agreements for both the Giants and Athletics expire at the end of the season. Major League teams usually evaluate and sign agreements with minor league affiliates after the end of the regular season.

The story has caused a flurry of responses from both Sacramento and Fresno.

Mark Ling of the River Cats told KCRA-TV that it was just a rumor and no discussions are being held at this time. He went on to point out that Sacramento would be subject to tampering charges for talking to other teams during the season.

The Fresno Bee talked with Derek Franks, executive vice president of the Fresno Grizzlies, who said his team believed that the Giants would renew their contract with his club. The Grizzlies have had a 17-year affiliation with the Giants.

Both Sacramento and Fresno have first class facilities. Raley Field in West Sacramento opened in 2000 and seats 14,014 people with a beautiful view of downtown Sacramento from the stands. Sacramento leads the league in attendance.

Chukchansi Park was built in 2002 in downtown Fresno and holds 12,500 fans with views of the downtown city center.

This reporter has visited both parks and has found them to be comparable in all areas. Both facilities give fans a close up and personal experience at the games. The concessions are Major League quality. Ticket prices are affordable. Both clubs provide a very fan friendly experience.

Why would the Giants want to change cities after a very successful run in Fresno? The fact is they might not be interested unless they get a better deal than they have in Fresno. It would be closer for team officials and players to shuttle back and forth to San Francisco. There might be a small bump in interest with the minor leaguers winding up with the Giants.

The bottom line is the owners of the River Cats may see a potential monetary advantage by becoming an affiliate of the Giants. Sacramento is seen as a Giants town and the River Cats organization may want to exploit that association.

The River Cats may also see the Athletics as a wounded team. No one knows where the team will be playing in the future. A new Bay Area stadium is just a pipe dream. At this point, who knows if the A’s will be in Northern California five years from now? The River Cats may want to bet on the sure thing which would be the San Francisco Giants at this time.

Two areas favor the A’s when it comes to staying in Sacramento. First, the River Cats win. They are perennial favorites to win the PCL championship and are in first place in their division at this very moment. The Grizzlies have struggled to attain winning seasons let alone win a championship. Secondly, a starter – especially pitchers – in Sacramento tonight may be a starter in Oakland tomorrow night. Most of Oakland’s key players were once River Cats. Oakland is much more dependent on their farm system than are the Giants.

The other possibility is the River Cats may be trying to get a better deal out of the Athletics. Sacramento may be setting up some competition to get more out of the miserly A’s. That is a very dangerous game to play with a team who believes less is more. The Athletics might be very happy to have their Triple-A team in Fresno in 2015.