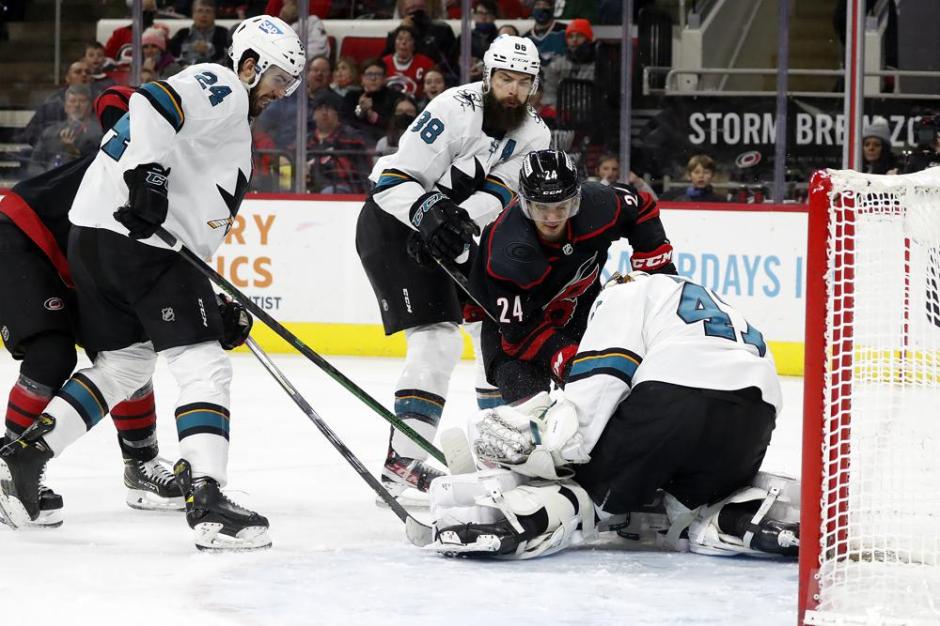 The San Jose Sharks fell 2-1 in a nailbiter against the Carolina Hurricanes on Sunday. Vincent Trocheck and Andrei Svechnikov scored for Carolina. Frederik Andersen made 27 saves for the win. Rudolfs Balcers scored for the Sharks and James Reimer made 27 saves in the loss.

Both teams were playing back-to-back games, though the Sharks had to travel as well. The Sharks were also asking their goaltender to play back-to-back games, as Adin Hill is out with an injury. This put added pressure on the Sharks defense. Of their performance, Sharks Head Coach Bob Boughner said: “I thought all our D had a decent game back there. I think, you know, we were more physical tonight. We could’ve had better puck movement back there but they’re a pinching team hard all over the ice and that doesn’t give you a lot of options coming around that net.”

Of playing back-to-back games, Sharks goaltender James Reimer said: “Obviously, playing back-to-back is tough with travel and a short schedule. But that’s why you train all summer, so you can be ready for this and the training staff did a great job doing what they could to put humpty dumpty back together again and get ready to play tonight.”

The Sharks will face the Tampa Bay Lightning next, the team that beat them 7-1 in the game before this road trip started. It will be the Sharks’ last game before the All-Star break. Of the upcoming match, Sharks forward Andrew Cogliano said:

“I think we owe it to ourselves to finish this road trip the right way. We played hard, [Reimer] played back to back games, you don’t see that often. We got two of our best defensemen out, guys that played very hard back there and come in, you know, special teams has been good. I think we’re just at a point where you got to lay it on the line in terms of playing our best game against a really good team and then the break will be good for our team I think.”

The game against the Hurricanes was the opposite of Saturday’s high-scoring meet in Florida. The goals came few and far between Sunday.

Vincent Trocheck gave Carolina the early lead with a goal at 4:36 of the first period. Skating into the zone 1-on-3, Trocheck took the shot from just inside the blue line and beat Reimer on the glove side. Assists went to Ian Cole and Ethan Bear.

The Sharks held a slight lead in shots during the first period, 11-9. In the second, however, Carolina outshot San Jose badly, 11-4. The Sharks power play had one shot on goal, and their penalty kill gave up one shot and had two short-handed shots. In the face-off circle, Carolina prevailed through the first two periods, winning 52% in the first and 74% in the second.

Rudolfs Balcers tied the game at 3:36 of the third period. Balcers was skating across in front of the net when Nicolas Meloche took a shot from the point. The puck went off of Jonathan Dahlen and right to Balcers for the shot. Assists went to Dahlen and Meloche.

Andrei Svechnikov scored the game winner at 16:16 of the third. Brett Pesce took a shot from the blue line that went into a snarl of traffic right in front of the net. When the puck bounced back out, Svechnikov was the only one who could get to it. Assists went to Pesce and Sebastian Aho.

The Sharks made a good push in the third, out-shooting Carolina 13-9 and improving in the face-off circle to 52%.

Mario Ferraro missed Sunday’s game due to a mouth injury sustained in Saturday’s tilt against the Panthers.

The Sharks will play in Tampa Bay against the Lightning on Tuesday at 4:00 PM PT. 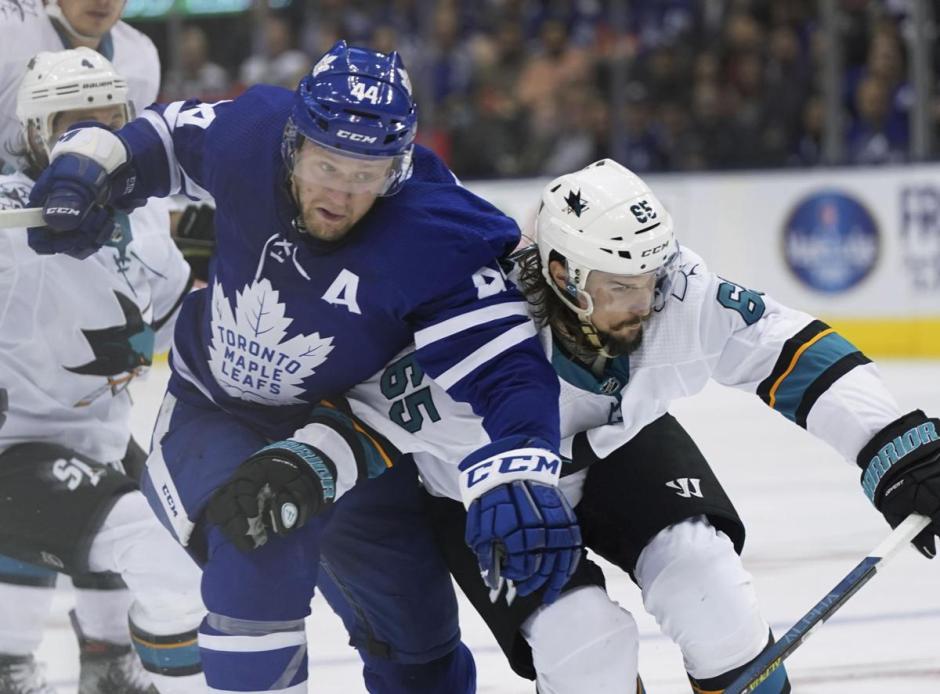 #2 Mary Lisa, was this a little different game than the Sharks’ win over the Canadiens on Thursday night?

#3 Former Toronto Maple Leaf Patrick Marleau played in his old building the Scotiabank Arena on Friday, which turned out to be his 1,500th game with the Sharks.

#4 Leafs goalie Frederik Anderson stopped 16 out of 17 as Kevin Labanc got the lone goal for San Jose. Anderson didn’t face a whole barrage of shots and the Leafs defense kept the puck away from the Sharks most of the night.

#5 The road trip continues to Ottawa on Sunday night. Mary Lisa tells us how she sees these two teams in the Sharks fifth game on this five-game road trip.

Watching the French team beat the Canadians in the World Championships was one of the most entertaining viewing experiences I have had in a while. Even though I had to keep clicking through ad popups, exposing my computer to who knows what kind of hazards, the game was riveting. Sure, it went to a shootout, after a couple of power play goals from the French kept them in the game. Goalie Cristobal Huet also kept them in the game, neutralizing the not yet ready for prime time Canadian team. But who doesn’t love to see an underdog steal one?

The French are not the only underdogs playing right now. The Montreal Canadiens, though their record hardly looks like an underdog’s, had the Boston Bruins on the ropes for a bit. I wonder how many people became Habs fans then? It isn’t that the Bruins are so easy to root against, but they won the Cup so recently, and they are reputed to be big tough guys. The Habs are supposed to be quick and light in the way they play. (Hence the utter confusion about the Douglas Murray signing.) Yet even if the Bruins are the hounds and the Canadiens the foxes, it usually takes several hounds to take down one fox. That makes us root for the fox. We know one hound could never catch a fox on his own, but it still seems unfair to gang up on the little fox like that.

Neither team shows the defensive recklessness of some teams (hello Pittsburgh), though both teams get reliable goaltending. Tuuka Rask and Carey Price are both exceptional, in their prime, and playoff hardened. Neither has been surprising in a good way or a bad way. They have performed as expected: very well.

The teams were more evenly matched than advertised, but hyperbole makes it a better story.

What is not exaggerated are their respective playoff records. The Bruins won the Cup in 2011 and made it to the Finals last season. The Habs haven’t been to the Conference Finals since 2010, and they haven’t won a Cup since 1993. One of these teams is due, the other has won recently enough to remember the way clearly. The latter will not go quietly, if at all. The Bruins demonstrated as much by taking the lead in the series on Saturday.

Here in the West, Sharks fans may or may not be watching the Freeway Series between the Los Angeles Kings and the Anaheim Ducks. If they are watching, they may have noticed how strange it is that two teams that did so well at home have now turned into road warriors, if across town really counts as a road game. In any case, it is strange to see the Ducks cast in the underdog role, since they were so dominant in the regular season.

One of the more talked about issues is the way Bruce Boudreau has been handling the Anaheim goaltenders. He pulled Frederik Andersen twice before he had to be replaced for injury, always putting Jonas Hiller in. Hiller has played well, has experience, and probably deserved to start Saturday. But the Ducks started the season overloaded with young goaltending talent. They even traded one away to the Oilers, they had so many goalies. Now they can’t seem to find one the coach can rely on.

It doesn’t really breed confidence, to keep switching goaltenders. It also doesn’t breed confidence to have a goalie the team doesn’t trust to make all the stops he needs to make. Here is the problem with that– some teams play better defense with a backup in the net, precisely because they don’t trust him. Doesn’t it make more sense to give defense extra attention, no matter who is in goal? What if your awesome unbeatable goalie has an off night? It wouldn’t matter if you were helping him out enough.

See the Minnesota Wild and Ilya Bryzgalov for how to make it work. Bryzgalov has one of the most mercurial records in the NHL. This season alone, he had to claw his way back into the league after starting off signed to a PTO with an ECHL team. He is not stealing games for Minnesota, but they are doing pretty well for a team working on its fourth goalie in the season. In response, he is playing better behind them.

See the LA Kings and Jonathan Quick in Games 1 & 2 against Sharks for how to let it take you down. No matter how the Sharks lit him up, it took the Kings two games to figure out that their super-duper goalie was not going to win the game for them and he needed some help. Once they gave it to him all was well, but how it could take them so long to get their act together is mind-boggling.

They say that a goalie has to steal a couple of games along the road to a Stanley Cup. That may be true but it seems awfully risky to assume that your team is going to simply fall apart for a game or two along the way. Yes, if a Sharks goalie had stolen a game, or two, maybe they would still be in it. But after the way the Sharks played in Game 5, did they deserve to be?

Sometimes a team has no choice but to flip flop goalies through the playoffs. The 2010 Flyers made it as far as the Finals, changing starting goalies mid-playoffs due to injury. Michael Leighton had only been cleared to play the day before he replaced Brian Boucher, and each goaltender gave exceptional performances in turn. In the end, they were still being swapped mid-game, I suspect because neither was truly 100% healthy. Through it all, the rest of the team held it together, killed themselves on defense (Ian LaPerriere almost literally) and went further than the Sharks have ever gone.

Maybe confidence is over-rated. Maybe will is all.

Antti Niemi was a raw rookie in his first season of North American hockey when he won. He didn’t even play in the minors. The Blackhawks made due. There really is no sure-thing formula for the role goaltending plays in a Cup run. Everyone needs to pull their weight and a little more if possible. Should it matter to the Ducks whether Anderson or Hiller or Gibson is behind them? No. If the puck is behind them, they need to get it back in front of them ASAP, no matter who is perched in the paint. That’s a good rule for any team to follow.