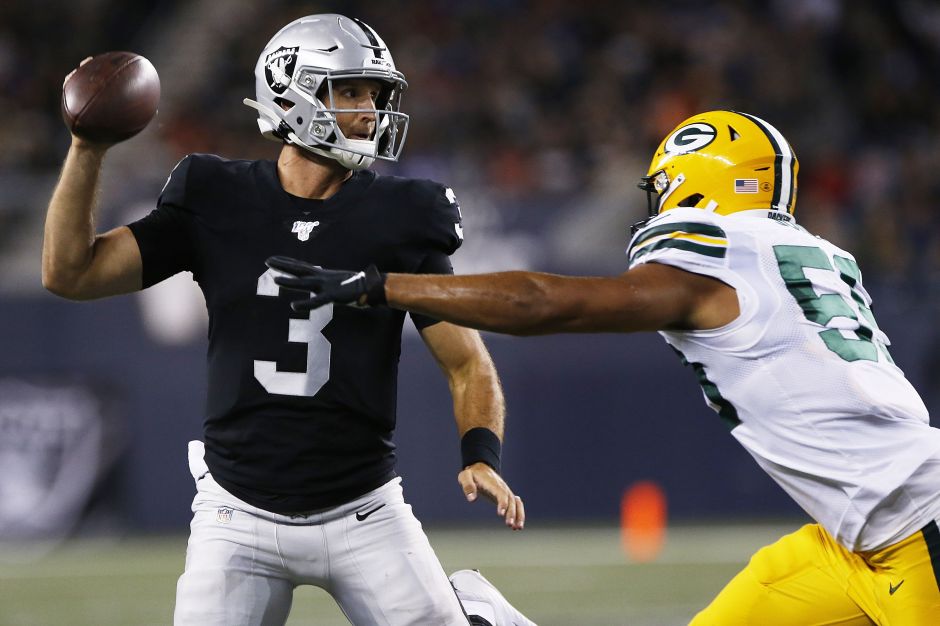 #1 The Oakland Raiders lost third-string quarterback Nathan Peterman to an elbow injury the injury so bad that Peterman will be out for eight weeks bringing him back at the earliest at the end of October.

#2 The Raiders signed quarterback DeShone Kizer who was just released by the Green Bay Packers after the last preseason game, Kizer was the fourth-string quarterback. The Raiders picked up Kizer just after he was released and after it was confirmed by team doctors that Peterman would be out eight weeks with the elbow.

#3 London talks about how important it is for the Dallas Cowboys to sign Ezekiel Elliott and that Cowboys owner Jerry Jones says as soon as a deal is reached, the Cowboys look forward to putting Ezekiel in the line up this weekend against the New York Giants.

#4 For the second consecutive game, the San Jose Earthquakes are in the win column. The Quakes got a shutout against Orlando City FC and won convincingly 3-0. How important is a game like this to boost the Quakes’ morale after going without a win in three previous games before winning two straight?

#5 Chris Wondolowski on Saturday extended his league-leading goal total to 157 goals scoring his 20th goal of the season. A remarkable career and a remarkable season.

London Marq does Headline Sports each Wednesday at http://www.sportsradioservice.com

OAKLAND — The Raiders travel to Dallas for their final preseason game this week when they take on the Cowboys on Saturday, Aug. 26 at 5:00 p.m. PT at AT&T Stadium. This will be the first meeting between the two teams since 2013, when both teams met each other in the preseason and on Thanksgiving Day in the regular season.

Both teams will meet each other again this season when Dallas comes to Oakland-Alameda Coliseum on Dec. 17 on NBC’s Sunday Night Football, which will be one of the NFL’s most watched games in 2017.

Last week, the Raiders lost at home to the Los Angeles Rams 24-21 in Oakland’s first home game this preseason.

Quarterback Derek Carr completed 7-of-9 passes for 100 yards, two touchdowns and one interception while posting a quarterback rating of 113.0 in his first action in the 2017 preseason. The game also marked the first time that Carr played at the Oakland-Alameda Coliseum in an NFL game since breaking his leg on Christmas Eve against the Indianapolis Colts.

Carr looked good and showed no lingering affects from the season-ending injury that derailed the 2016 season for the Silver and Black, a season that saw Oakland finish 12-4 and reach the postseason for the first time since 2002.

Carr found wide receiver Michael Crabtree for a dazzling 13-yard touchdown pass where Crabtree shook the defender out of his cleats, and backup tight end Lee Smith hauled in a 19-yard touchdown down the middle of the field from Carr for the quarterback’s first touchdowns in the 2017 season.

Raiders running back and Oakland native Marshawn Lynch finished with 10 yards on two carries. Lynch made his home debut in front of Raider Nation and got the crowd on its feet with a “Beast Mode” like run for five yards on his first carry.

Defensively, Khalil Mack appeared to be in regular season form after recording four tackles (three solo) and a sack in his first action in the preseason, but Oakland’s defense overall still have some holes to fill, most notably at middle linebacker and in the secondary.

But the big story heading into Saturday night’s game in Dallas for Oakland is the return of the their left tackle Donald Penn to the team. Penn was seen on the practice field in Alameda on Wednesday after ending his 26-day holdout in search of a new contract.

According to NBC Sports Bay Area Raiders Insider Scott Bair, the two-time Pro Bowler ended his holdout and re-joined the club on “faith” and “believing the Raiders will work out a higher pay rate” once he returned.

Penn allowed just one sack and 28 total quarterback pressures in 2016, ranking No. 6 among all NFL tackles according to Pro Football Focus. The 11-year veteran is in the final year of a two-year, $11.9 million contract and wanted money that would put him in the top-10 among highest paid left tackles in the game.

Penn is scheduled to make $5.8 million this season, which is pittance compared to other elite left tackles.

Typically in the third week of the preseason, teams will play their starters well into the second half hoping to build more chemistry as the regular season approaches and with Penn missing most of training camp, you’d expect to see him in the lineup Saturday with Carr and the rest of the first-team offense to play catch-up.

Cowboys starting quarterback Dak Prescott completed 7-of-8 passes for 106 yards, with a 32-yard touchdown toss to wide receiver Dez Bryant down the left side line on the game’s opening drive. Bryant finished with two catches for 55 yards in one-half of action.

Star running back Ezekiel Elliott, who hasn’t played in the entire preseason for the Cowboys, is expected to get reps against Oakland according to Dallas head coach Jason Garrett via ESPN Dallas Cowboys reporter Todd Archer.

Elliot, the NFL’s rushing leader with 1,631 yards to go along with 15 touchdowns and a Pro Bowl nod as a rookie, was recently suspended by the NFL for six games for violating the NFL’s personal conduct policy following and has repealed the decision. The hearing is set for Tuesday, Aug. 29.

“I think the biggest thing is just having the mindset of preparing him for Week 1 of the season, and that’s the approach that we’ve taken,” Garrett said via Archer. “He’s got a number of more reps in training camp than he did last year. If you remember, he had the hamstring injury last year and ended up playing in the second-to-last preseason game and got eight, 10, 12 snaps in that ballgame, so that’s the approach that we’ve taken with him, and anything beyond that we’ll take as it comes.”

Both teams will have short turnarounds after Saturday night’s contest, with the Raiders set to play the Seattle Seahawks in Oakland on Thursday, Aug. 31, and the Cowboys traveling to Houston to take on the Texans the same day.