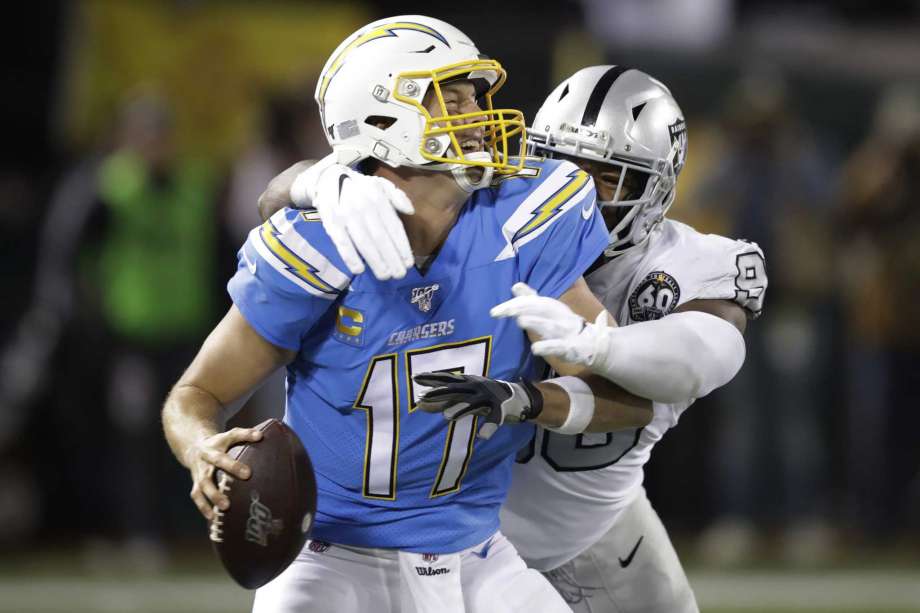 OAKLAND — With back-to-back wins at home, the Raiders look to finish off their three-game home stand at the Oakland-Alameda County Coliseum with a win over the visiting Cincinnati Bengals as the two teams hook up for action in Week 11. This will be the first matchup between the two clubs since 2015, in a game that the Bengals won convincingly, 33-13 in Oakland.

Cincinnati currently holds a three-game winning streak over Oakland, with the Raiders last defeating the Bengals, 20-17, in Oakland back in 2009.

Kickoff for this battle in the AFC is at 1:25 p.m. PT and will be broadcast on CBS.

In Week 10, the Raiders defeated their AFC West rival, the Los Angeles Chargers, 26-24, to improve their record to 5-4. Oakland sealed their second-straight victory at home behind rookie running back Josh Jacobs’ 18-yard touchdown run in the final minute of regulation. Jacobs finished with 71 yards on 16 carries and three catches for 30 yards in the game.

In the process, Jacobs became just the 16th player in NFL history to rush for at least 800 yards in his first nine career games per Elias Sports Bureau. Currently, Jacobs has rushed for 811 yards this season. His seven rushing touchdowns are tied with Arthur Whittington for second-most by a rookie in franchise history.

Raiders quarterback Derek Carr recorded his 18th career fourth-quarter comeback, and his 19th career game-winning drive. Carr threw for 218 yards and one touchdown. On the Raiders’ final offensive drive of the game, Carr completed 6-of-8 passes for 57 yards that would setup Jacobs’ go-ahead touchdown.

But the real story of the game was the play of Oakland’s defense, who made life extremely difficult for Chargers quarterback Philip Rivers.

For the second-straight game, safety Karl Joseph would make the game-sealing play, intercepting Rivers in the final seconds of the game.

Safety Erik Harris recorded two interceptions for Oakland on the night in the first-quarter, which included a 56-yard pick-six that extended the Raiders’ lead to 10-0. It was Harris’ second pick-six of the season.

Cincinnati (0-9) is coming off a 49-13 thrashing at the hands of their AFC North rival, the Baltimore Ravens in Week 10.

Rookie quarterback Ryan Finley made his debut for Cincinnati and had a game to forget.

Finley, who replaced franchise quarterback Andy Dalton after Dalton was benched during the team’s bye week, completed 16-of-30 passes for 167 yards, one touchdown and one interception that was returned 89 yards for a pick-six by Ravens cornerback Marcus Peters that made the score 28-3 midway through the second quarter.

The loss to the Ravens were the Bengals’ 11th-straight loss dating back to the last season, tying the longest two-season losing streak in club history per Elias Sports Bureau. They’re one loss away from matching the worst start in club history.

Following Sunday’s game, Oakland heads east to New York to take on the Jets at MetLife Stadium in Week 12, while the Bengals return home to face the Pittsburgh Steelers. 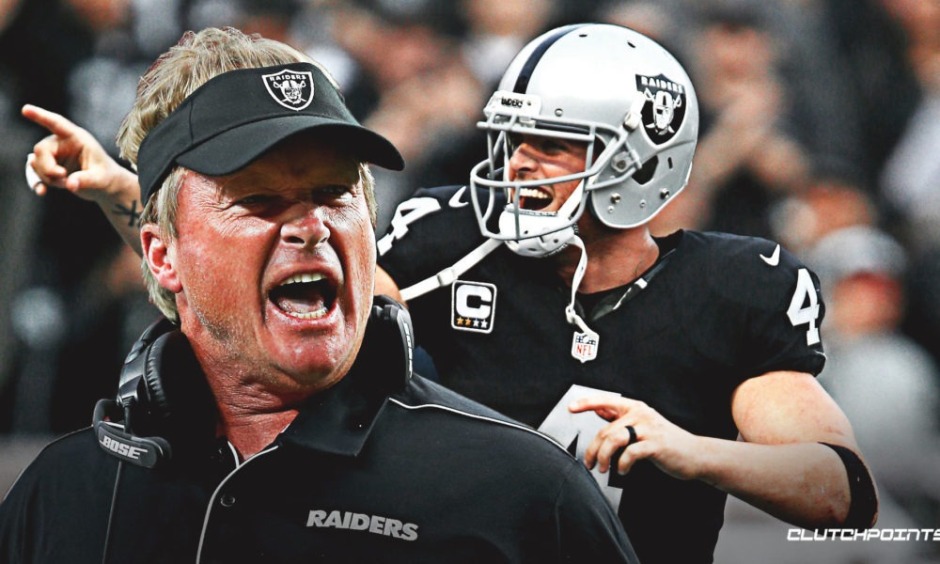 The Oakland Raiders, fresh off an impressive win in Indianapolis in Week 4, are off to London where they will host (that’s right, host) the Chicago Bears in Week 5 for the NFL’s first-ever matchup in the new Tottenham Hotspur Stadium. Sunday’s game will mark the second-straight year that the Raiders have played in London, and the fifth time in six years playing an international game.

The all-time series is tied at seven wins apiece, but the Bears have won the previous matchup between the two teams, 22-20, back in 2015 at Soldier Field.

Last week, the Raiders dispatched the Colts, 31-24, behind a fast start by the offense who jumped out to an early 14-0 lead. Raiders quarterback Derek Carr was terrific, leading Oakland to touchdowns on three of their first four drives of the game.

“We finished our drives, we converted on third downs, we were efficient running the football. Everyone did their job,” Carr said after the win that pulled Oakland to 2-2 on the season. When everyone does their job, we can score points.

Oakland’s second offensive series of the game ended after wide receiver Trevor Davis ran past the Colts’ defense on the left side for a TD that propelled the Raiders to a 14-0 lead before fans at Lucas Oil Stadium sat down.

Wide receiver Tyrell Williams caught a touchdown for the fourth-straight game this season, a 19-yarder from Carr that gave the Raiders a 21-7 lead.

Oakland’s defense preserved the win late in the fourth quarter.

With the Raiders clinging to a 24-17 lead, safety Erik Harris stepped in front of a Jacoby Brissett pass and returned it for a 30-yard pick-six that gave Oakland a 31-17 lead shortly before the two minute warning.

Harris’ interception was the first takeaway by the Raiders this season.

Chicago (3-1) is coming off a 16-6 victory over their NFC North rivals, the Minnesota Vikings at Solider Field in Week 4.

After starting quarterback Mitchell Trubisky was knocked out of the game on the first possession with a left shoulder injury, backup Chase Daniels would stabilize the Bears’ offense over the Vikings’ defense.

Daniels threw for 195 yards and a touchdown while completing 22 of 30 passes. With Trubisky most likely out for Sunday’s game, expect Daniels to get the start against the Silver and Black.

But the real calling card for Chicago has been its defense, which has made life difficult for opposing teams this season.

Mack who was traded to Chicago from Oakland before the start of last season, told NFL Network’s Deion Sanders following Chicago’s win over Minnesota that he’s looking forward to the matchup against his former team.

Vikings running back Dalvin Cook, who came into Sunday’s contest with an NFL-leading 375 yards rushing through four games, was held to just 35 yards on 14 carries.

Following Sunday’s game, both teams will enter their bye weeks before Oakland travels to Green Bay to face the Packers, and the Bears taking on the New Orleans Saints at home in Week 7 respectively. 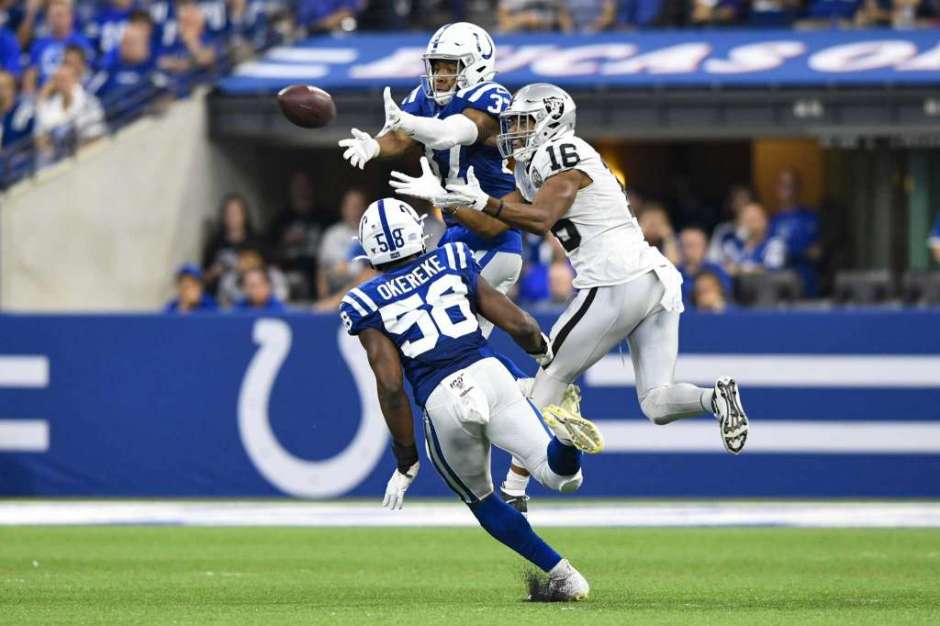 photo from sfgate.com: Indianapolis Colts safety Khari Willis (37) breaks up a pass intended for Oakland Raiders wide receiver Tyrell Williams (16) during the first half of an NFL football game in Indianapolis, Sunday, Sept. 29

In the midst of their road trip, the Oakland Raiders road swing headed to Americas Heartland, Indianapolis, Indiana.

Derek Carr went 21-for-31 for 189 yards and 189, helping the Raiders break their two-game losing streak with a 31-24 victory over the Indianapolis Colts at Lucas Oil Stadium.

Carr took the Raiders down the field on their first series of the game, as he threw an 18-yard touchdown pass to Foster Moreau that ended a 16-play 75-yard drive to give the Raiders an early 7-0 lead.

After the Colts were forced were forced to punt after going three-and-out on their first series of the drive, Trevor Davis quickly made it 14-0, when he took a Carr handoff and scampered 60 yards to the end zone just 10 seconds after taking the punt to the Raiders 40-yard line.

Jacoby Brissett, who was forced into the Colts number 1 position at quarterback when Andrew Luck abruptly retired during the preseason cut the Raiders down to 14-7, as he found tight end Jack Doyle for a five-yard touchdown pass.

Despite the loss, Brissett went 24-for-46 for 265 yards, throwing three touchdowns and was intercepted once.

After the Brissett to Doyle connection for a touchdown, Carr once again gave the Raiders a 14-point lead, as he found Tyrell Williams for a 19-yard touchdown pass.

Veteran Adam Vinatieri then cut the Raiders lead to 21-10 nearly half way thru the second quarter, as he connected for a 26-yard field goal.

On their first series of the third quarter, Daniel Carlson kicked a 26-yard field goal to give the Raiders a 14-point lead for the third time on the afternoon.

Like before, the Raiders, could not put the Colts away, as Brissett found Chester Rogers for a four-yard touchdown pass to cut the Raiders down to seven once again.

It looked like the Raiders put the game away, when Erik Harris picked off a Brissett pass and returned it 30 yards for a touchdown with just 2:09 remaining in the game.

Unfortunately for the Raiders, that was not the case, as Eric Ebron caught a 48-yard touchdown pass from Brissett with 70 seconds in the game.

Following a failed onside kick, Carr kneeled to end the game and the Raiders escaped with a seven-point victory.

Rookie Josh Jacobs led the Raiders in rushing with 79 yards rushing on 17 carries.

NOTES: Vontez Burfict was ejected from the second quarter, as he was called for unnecessary roughness for a helmet-to-helmet hit on Doyle. Burficts ejection came after the officials reviewed the penalty.

UP NEXT: Even though it is a home game for the Raiders, the game will be played in London, as the Raiders will face the Chicago Bears and former teammate Khalil Mack on October 6.