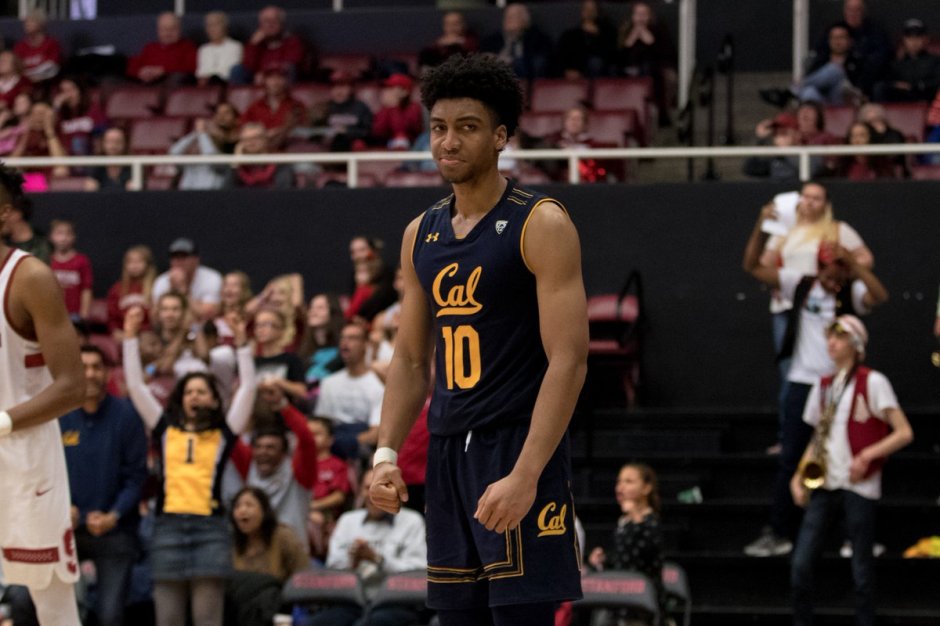 PALO ALTO, Calif. — The University of California Golden Bears bested the Stanford Cardinal at Maples Pavillion Thursday night with a score of 64-59, spoiling Stanford’s Senior Night and last game of the regular season. With their loss, Stanford moved to 8-10 in Pac-12 play, leaving them in 10th place in the conference. Cal improves their Pac-12 record to 3-15, however, they still sit at the bottom of the conference standings.

The Bears dominated the first half, outscoring the Cardinal 37-24. Only a couple minutes into the game, Cal rattled off a 17-0 run over five minutes, extending their lead to 19 points only 10 minutes into the game. Stanford was able to slowly narrow their deficit to 10 points before Cal freshman guard Matt Bradley banked home a long 3-point basket at the half to give the Bears a 13-point lead going into the locker room.

In the first period, Cal shot with much higher efficiency from Stanford everywhere except for the foul line. The Bears made 6 out of their 10 3-point attempts, whereas the Cardinal were not able to connect on any of their 12 tries.

7-foot-3 freshman Connor Vanover provided the Cal offense with a red-hot shooting spree, scoring his 18 first-half points on 7-8 shooting, including connecting on all 4 of his three-point attempts.

The first half Stanford offense ran through sophomore forward KZ Okpala, who scored 13 points on 6-8 shooting. Stanford struggled mightily with ball security and playmaking, as they turned the ball over 8 times and only totaled 3 assists. With usual starting point guard Daejon Davis still sidelined with a foot injury, the bulk of the ballhandling was done by freshman guards Bryce Wills and Cormac Ryan.

Cal scored three straight buckets to open the second half, increasing their lead to a game-high 21 points. The two squads traded off bursts of scoring until Stanford was able to string together some quick baskets and defensive stops to decrease the lead to single digits with 4 minutes left in the game. After missing their first 21 3-point attempts, Stanford hit 3 straight 3-pointers down the stretch to work the Cal lead down to a measly 3 points. However, Vanover responded on the other end, drawing an and-one foul on a shot under the basket. After that, the Cardinal were forced to play the foul game and could not make up the 6 point deficit incurred in the final minute.

Vanover led the game in scoring with 24 points on 9-12 shooting and 5-6 from three. Bradley and junior guard Paris Austin also lit up the scoreboard with 14 and 15 points, respectively. Sophomore forward Justice Sueing also pitched in a notable effort of his own, scoring 9 points and 10 rebounds en route to a near double-double. Only 5 Cal players got on the scoreboard Thursday evening, and the Bears bench was only able to scrape 2 points together over the course of the whole game.

Okpala led the Cardinal in scoring yet again with 21 points on 9-14 shooting. Senior center Josh Sharma put on a good show for Senior Night with 11 points and 13 rebounds, however, his game was cut a couple of minutes short due to his fifth personal foul. Ryan, who missed his first 7 shots, caught on fire down the stretch for 8 points on 3 shots. He also recorded a very impressive no-look overhead pass from his back to a streaking Marcus Sheffield for a transition bucket late in the second half.

This marks the last game for the Cardinal before the Pac-12 tournament in Las Vegas next week. This game likely marks the last home game for graduating senior Josh Sharma as well as sophomore KZ Okpala, who is expected to enter the NBA Draft this summer.

PALO ALTO, Calif. — The Stanford Cardinal fell to the Pac-12-leading Washington Huskies by 1 point on Sunday afternoon. KZ Okpala’s missed 3-point attempt as the buzzer sounded would have given Stanford the win had it been good, but with its miss, Washington walked away with a narrow victory.

Coming off a 3-point loss to Cal, yet still clinching the Pac-12 regular season title on Thursday, Washington was never able to fully pull ahead from Stanford and establish itself as the dominant team. In the first half, Stanford held a single-digit lead for the first seven minutes, until Washington took over and held a lead for all but a minute and a half of the remainder of the period. In the second half, Stanford managed to grab some brief leads throughout the first 15 minutes, but the scoreboard was still mostly controlled by Washington. However, down the stretch, the teams traded off buckets and experienced 4 lead changes—no margin higher than 3 points. 2 straight jumpers by sophomore Husky guard Jaylen Nowell in the final minute and a half of play proved to be too much for Stanford to come back from as they could only scrape together one basket in the rest of regulation.

Washington outscored Stanford 29-33 in a slow-paced first half that featured 17 total turnovers and a combined 29.8% shooting percentage from the field. Sophomores KZ Okpala and Oscar da Silva, as well as senior Josh Sharma, saw limited playing time in the first period as they all picked up 2 personal fouls.

Out of the 10 players that saw first-half time for the Cardinal, only 5 recorded points, and only 4 of those connected on any of their field goal attempts.

The teams played much cleaner basketball in the second half, shooting a combined 52% from the floor, including a remarkable 56% from downtown.

The Pac-12 leader in field goal percentage in Josh Sharma led the second half in total points with 10. He also pitched in 6 rebounds to finish with game-leading 16 points and 14 rebounds. Freshman guard Cormac Ryan caught on fire during the second half, shooting 3-4 from deep, finishing with 13 points. Da Silva was the third double-digit scorer for Stanford, totaling 15 points on 5-8 shooting along with 9 rebounds and 3 assists.

Overall, Stanford shot 40% from the field and after going 0-8 on threes in the first half, they shot 6-9 from deep in the second period to bring their percentage up to 35%.

Nowell, who finished with 13 points on 6-11 shooting, was the leading scorer for Washington. Disturbed by primary ball handler and point guard David Crisp’s assist-less effort, Washington did not pass the ball well at all and finished with only 7 points at 14 turnovers.

Like Washington, the Cardinal also dealt with passing and playmaking struggles. Stanford played the whole game without their starting point guard in sophomore Daejon Davis, who is still hurt from a foot injury that he suffered in Stanford’s last game against Washington State. The Cardinal greatly missed Davis’ playmaking abilities, as they tallied a terrible assist to turnover ratio at 10:19.

To round out their regular season and make one final push for Pac-12 tournament seeding, Stanford will host Cal on Thursday evening at Maples.

PALO ALTO, Calif. — The Stanford Cardinal men’s basketball team hosted the Utah Utes on Thursday night in a crucial Pac-12 matchup. The Cardinal ended up falling to the Utes in Palo Alto for the first time since 1971, with a final score of 70-66.

Utah gained some separation in the crowded Pac-12 with their win as they move up to join the Arizona State Sun Devils for third in the conference. Stanford slides to 2-5 in conference play, where they now occupy the ninth spot in the conference standings.

The first half was played at a blistering pace, with a total of two free throws attempted in the half and with each team attempting close to 30 field goals. Stanford missed their first 5 three-point attempts and finished the half 1-6 from deep. On the other end, Utah closed out the first half with a three-point barrage en route to an incredibly efficient 5-7 clip from downtown. Utah went 7-9 for their last 9 field goal attempts of the half, and freshman forward Timmy Allen’s last-second layup stretched the Utes’ lead to 5 at the half.

Sophomore forward KZ Okpala opened the half off right for the Cardinal, slamming down a thunderous dunk on Stanford’s first second-half possession.

Despite Utah’s hot first-half shooting, they did not attempt a three-point shot until halfway through the second half.

After sophomore guard Daejon Davis hit a mid-range floater with 16:08 left in the game to give Stanford a 1-point lead, the Cardinal held the lead until senior Utah guard Sedrick Barefield got an extremely fortunate bounce on his 3-point attempt to give the Utes the lead with 2:12 remaining. The next possession, Okpala responded with a three-point basket of his own to even the score.

Senior Utah guard Parker Van Dyke finished a tough layup around senior center Josh Sharma to give Utah a 2-point lead with less than a minute left. After that basket, the Cardinal had to play the foul game in attempt to catch up with the Utes. However, Barefield cooly hit all 4 of his free throws down the stretch and Stanford could not make up the deficit.

Okpala led the game in scoring with 22 points on 7-15 shooting, but with a shaky 7-11 free throw performance. Davis, who started the game 0-6 on field goals, turned his night around in the second half and finished with 17 points on 7-16 shooting along with 4 assists and only 2 turnovers.

Sharma, who is very susceptible to getting in foul trouble, did not get into serious foul trouble until the final minute of the game. He ended up seeing the court for 34 minutes and finished with 12 rebounds and 9 points on 3-6 shooting.

Sophomore forward Oscar da Silva, who started the game, did not record a single point on 3 field goal attempts, despite seeing 28 minutes of playing time. Freshman forward Jaden Delaire picked up the offensive slack dropped by da Silva by scoring 7 points on 3-4 shooting.

Utah had three double-digit scorers in Barefield (18), Van Dyke (10), and sophomore forward Donnie Tillman (11). The Utes finished with a very impressive 64.3% of their 3-point shots falling and a respectable 47% general field goal percentage.

Stanford finished with more offensive and defensive rebounds, assists, fast break points, and points in the paint. The Cardinal also blocked Utah 10 times, where Utah did not record a single blocked shot all night. However, Utah’s more efficient scoring made the difference and helped hand the Cardinal their fifth Pac-12 loss of the season.

The Stanford will shift their focus to their eighth Pac-12 game where they will host the Colorado Buffaloes on Saturday, Jan. 26 at 5:00 PM PST.