The Kings entered the game on Monday night in Milwaukee with high hopes. The Bucks superstar – Giannis Antetokounmpo – was ruled out the game because he wanted to be with his new-born son (who we all expect to be the number one overall draft selection in 2038). Without “the freak” on the floor, the Kings knew they had at least a fighting chance versus the powerful Bucks.

The Kings (21-32) fell behind early, and it looked like it might be a walkover game for Milwaukee (46-7) even without Giannis. At the end of the first quarter, the Bucks held 38-24 lead.

Sacramento rebounded in the second quarter. The Kings outscored the Bucks 34-19 in the second period behind the 13 point barrage by Harrison Barnes. Barnes went 4-for-4 from the floor with all three of his 3-point attempts finding their mark. He also converted both of his free throw attempts. The Kings went to the locker room at halftime with a 58-57 lead.

The two teams went into an epic battle in the third quarter and went toe to toe. The Kings outscored the Bucks 32-31 in the quarter and held a 90-88 advantage at the end of 36 minutes.

The Bucks started the final quarter with a 13-0 run and never looked back. Milwaukee went on to outscore the Kings 35-21 in the fourth quarter as they fell 12 points short when the final buzzer sounded.

The Kings will be back in action on Wednesday night in Dallas.

The Bucks will travel to Indianapolis to play the Pacers on Wednesday night. 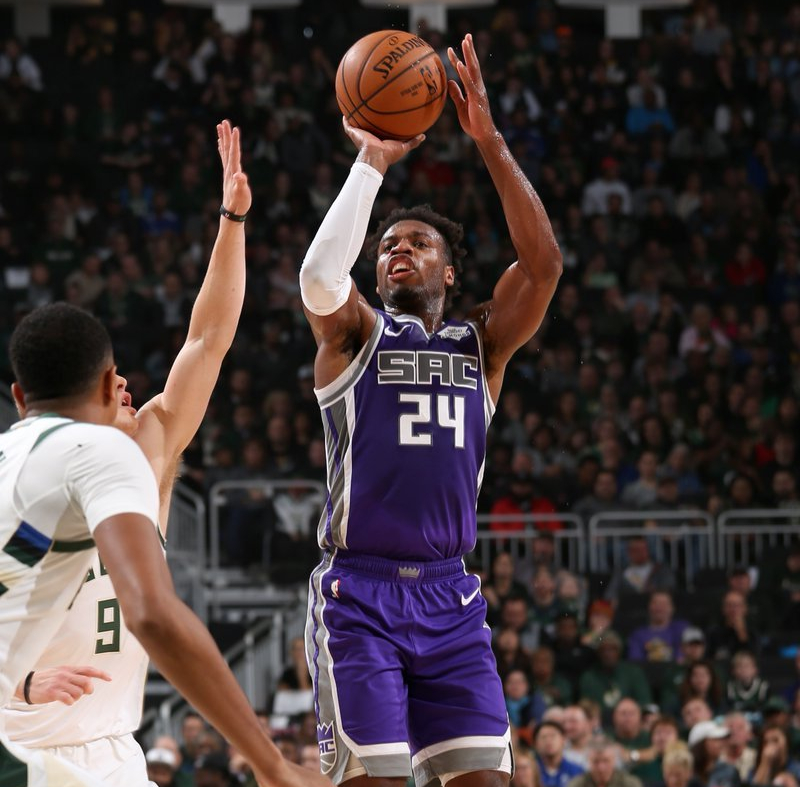 The Bucks did not take the Kings lightly
The Kings jumped out to an early 14-7 lead, but the Bucks were not going to have it. With 6:03 remaining in the first quarter, Milwaukee took a 17-15 lead and they would never trail again in the contest.

At the end of the first quarter, Milwaukee held a 39-30 lead. The Kings would not win a quarter in the game.

The Kings simply ran into a team with more talent than they have on Sunday. That is going often this season. This edition of the Sacramento Kings (6-4) is more talented than they have been in many seasons. They are fast, enthusiastic and positive. All indications are that this will be a very enjoyable season, but the Kings are still a Tier Three team that is trying to make the jump into Tier Two.

Kings have a surprise leading scorer
Justin Jackson came off the bench to score 22 points in just under 25 minutes of playing time on Sunday. Jackson who has been having trouble shooting from the floor shot 9-for-12 overall for the game. He made 4-of-7 from 3-point land. The Kings have been struggling at small forward and Jackson’s performance versus the Bucks had to make coach Dave Joerger very happy.

It’s back home for the Kings
The Kings returned to Sacramento after the game and will be off until Wednesday night when they will host the powerful Toronto Raptors (8-1) at the Golden 1 Center. The Kings next four games will be played on their home court.

If you turned off the Kings – Bucks game after watching for just four-minutes and 15-seconds, you know the score was Milwaukee 14 and Sacramento 0. The Kings entire starting lineup had not scored a point and were sent to the bench after just three-minutes and 10-seconds of playing time. So, to see the final score be Milwaukee 109 to 104 for Sacramento must come as a great shock to you.

Even more shocking to you who turned off the game may be the fact the Kings cut the Bucks lead to just one-point with 1:43 to go in the game. The Kings never held the lead in the contest but they had a legitimate chance to win the game with under two minutes remaining to play.

The Kings starting five did not score a point in the opening quarter of the game. They scored just 16-points in the first-half which is lowest scoring total for a starting five in the NBA since 2014. Buddy Hield scored 13-points for the second-unit and Zach Randolph put up 12-points to help keep the Kings in the game.  Giannis Antetokounmpo posted 19 points, Eric Bledsoe put 16 in the books and  Khris Middleton scored 14 points to lead the Bucks to a 63 – 52 lead at half-time.

The Kings had to start the third quarter without Willie Cauley-Stein who strained his lower back. The injury was not deemed serious but the team wanted to be cautious and sat him on the bench for the second-half.

The Bucks came out in the third-period and caught fire just like they had at the beginning of the game. They opened up a 20-point lead twice in the quarter with eight-points from “the Freak”, five put up by Middleton and five recorded by Brogdon in just over three-minutes on the floor. At the end of three-quarters, the Bucks held an 88-76 lead.

In the final period, it was all about the second-unit for the Kings once again. The Kings were led by Bogdon Bogdanovic who led the Sacramento scoring with nine-points. “Bogi” showed the world he is not afraid to take charge when the pressure is on. Buddy Hield added six-points while Frank Mason III and Z-Bo each put up four-points.

The Kings outscored the Bucks 28-21 in the final quarter but the opening runs by Milwaukee in the first and third periods proved to be too much and the Bucks won the game 109-104.

#Kings HC Dave Joerger was not happy after his team lost 109-104 in Milwaukee. They played well in quarters 2&4 but they still lost the game. This is a coach that does not believe in moral victories. He believes in victories. #ToughNight. #SacKings #NBA #KAHISports #KFBK pic.twitter.com/18iaCNSkAY

The team flew home after the game and will head back on the road on Tuesday when they will travel to Cleveland to get ready for a game of Wednesday with the Cavaliers.

Milwaukee will return to action on Monday night in Boston versus the Celtics.

Justin Jackson who is on assignment with the Reno Bighorns of the G-League scored 26-points, grabbed six rebounds and added three assists on Saturday night.

NBA fans used to live for the final two minutes of a game. They were rough, tumble and full of exciting action. Now with all of the stoppages for replay reviews, the excitement of the final 120 seconds has been all but lost.

On Friday night at the Golden 1 Center, the sellout crowd (17,608) were treated to an “old fashion” nail biting two minute finish in the game between the Phoenix Suns and the Sacramento Kings.

The excitement began with 2:32 remaining in the game when DeMarcus Cousins broke a 98-all tie with a step-back 3-point basket from the right corner off an assist from Matt Barnes. The Suns missed a jump on their possession. The Kings grabbed the rebound and called a timeout with 2:09 to go.

Cousins missed a jumper coming out of the timeout that was rebounded by Bledsoe of the Suns. T.J. Warren sank a jump shot at the 1:34 mark to bring Phoenix within one point of the lead at 101-100.

Each team missed a field goal opportunity then Cousins missed a layup that Lawson rebounded and then he was fouled by the Suns Tyson Chandler. The Kings maintained possession and Cousins attempted a 3-point shot that missed and Chandler rebounded.

The Suns Warren hit a 3-pointer (assist Booker) with 21.6-seconds on the clock to give his team a 103-101 lead. The Kings immediately called a timeout.

The Kings ran their play out of the timeout and with 8.2-seconds to go Darren Collison sank a 15-foot jump shot (assist Cousins) to tie the game at 103-103. It was the Suns turn to call a timeout.

Phoenix inbounded the ball at midcourt and to no one’s surprise the ball wound up in the hands of second-year guard Devin Booker. Booker put up a 20-foot fade away bank shot that  went in the hoop as the final buzzer sounded. The Suns had won the game 105-103 to the stunned amazement of the big crowd.

Who did what in the game

Focusing on 8th place in the Western Conference

The battle for the eighth and final playoff slot in the Western Conference continued on Friday night:

The Kings have no time sit and ponder their loss to the Suns. The Golden State Warriors make a return visit to the Golden 1 Center on Saturday night. It is never easy to face “the Splash Brothers” but to have to play them on second night of a back-to-back set is really unfair.

Phoenix returns home on Saturday night to host the Milwaukee Bucks who lost in Denver on Friday.

Oakland- The Golden State Warriors needed a strong performance by Klay Thompson to down the young and hungry Phoenix Suns 133-120 Sunday night at the Oracle Arena.The Warriors, who had a hard time beating the Suns in Phoenix on October 30th, had another tough time subduing the Suns coached by Earl Watson.

The Suns fell behind early in the first quarter 12-7. They then went on an 11-0 run and led by seven 30-23 with 1:30 left in the period. The Dubs defense played better, and they closed the gap to two, but the Warriors committed a shooting foul with just 1/2 second left on the clock. The Suns made the two free throws and led by four 32-28.

It was more of the same in the second quarter. The Dubs led by three 62-59 at the end of the first half. Phoenix continued to play well, and the Warriors could not put them away. The Warriors did increase the lead to seven at the end of the third period, but the Suns took it to them and led the Dubs 111-106 with 6:15 left to play. The Warriors woke up on offense and defense. Klay Thompson scored eighteen of his thirty points in the quarter and the Warriors defense, led by Draymond Green, was able to keep the Suns under control. The Dubs win 130-122.

The Warriors were led by Klay Thompson, Steph Curry with 30 points, six assists, and six rebounds. Kevin Durant added twenty-nine, and he had five assists and nine boards. Mr. defense, Draymond Green, had a double-double. He scored fourteen points, eleven assists, and seven rebounds. The Suns had six players in double figures. Eric Bledsoe and T.J.Warren each scored twenty. Devin Booker added nineteen; Jared Dudley had fourteen, Brandon Knight pitched in with 10. Former Warrior, and a very popular player when he was here, Leandro Barbosa knocked down eleven. The Warriors honored their former player with a video tribute during a timeout in the first quarter. The fans gave Barbosa a standing ovation, and he waved back to the crowd.

After the game, coach Steve Kerr said:”We’re trying to win a championship, you don’t do that simply by outscoring people.” “We set a bad tone on defense from the beginning.” “They (the Suns) played a really good game.” “We did not do a good job defensively.Gotta play better.”

The Warriors improve to 8-2, and the Suns fall to 3-8. The Warriors start a four-game eastern trip starting Wednesday in Toronto against the Raptors. Friday night they meet the Boston Celtics then play a back-to-back game Saturday night against the Milwaukee Bucks. If you remembered last year, the Dubs had a very tough victory against the Celtics to keep their winning streak alive. They then went to Milwaukee, and the Bucks beat them snapping their 24-game winning streak. Let’s hope history doesn’t repeat itself.