Sit back and relax as “Chape” and Charlie talk all things Kings on the Press Row Podcast. 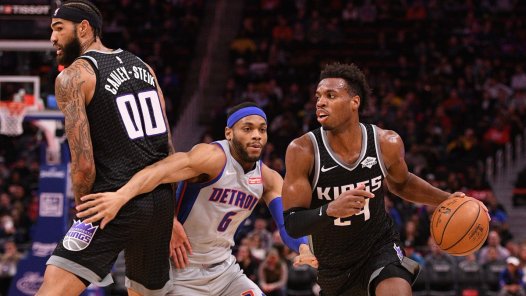 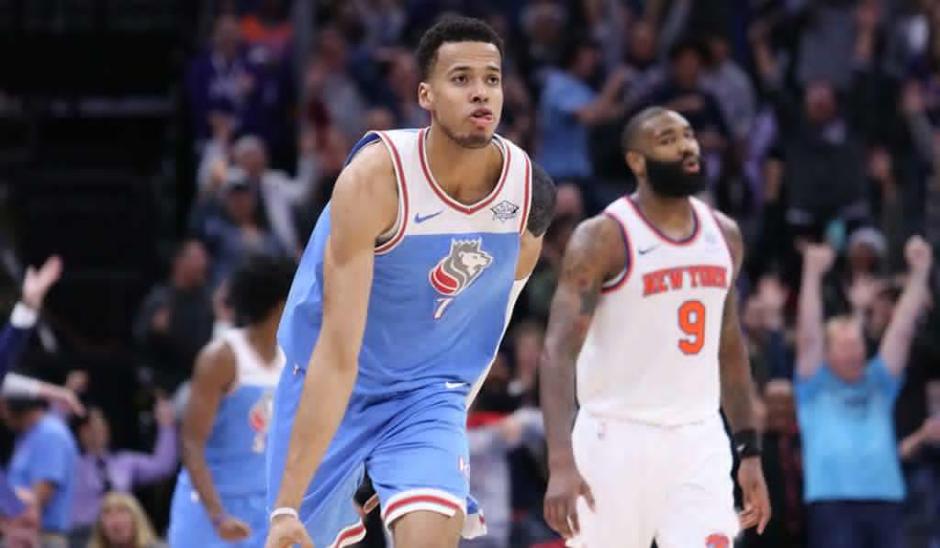 SACRAMENTO- The Kings won the second game of a five-game homestand on Sunday night at The Golden 1 Center with a 102-99 victory over the New York Knicks. Sacramento put on quite a show in a game that came down to the final shot. After giving up a big lead with seconds to go, Sacramento’s Skal Labissiere hit the game-winning 3-pointer to seal the game for the Kings.

In case you didn't see it, here it is from a different angle, Labissiere's game-winning 3-ball pic.twitter.com/jBM4RLupD4

The Kings were really rolling in this game early. They were led by a stellar night from Bogdan Bogdanovic who ended with 22 points and 7 assists. The Kings led by as many as 19 points in the middle of the fourth quarter. As soon as the Kings started to get comfortable, those pesky Knicks came storming back. In the final nine minutes, the Knicks had completely eliminated the Kings lead and tied the game with just over a minute remaining in the contest.

With just under 30 seconds to go in a tie ballgame, Bogdanovic showed why he’s going to be clutch for years to come. He hit a step back jumper to put the Kings on top 99-97. The Knicks were able to get to the free throw line and make both of their shots to tie the game at 99 all. With 5.3 seconds to go, the Kings in-bounded the ball to Labissiere who faked the hand-off to Bogdanovic, rose-up over Kyle O’Quinn and drained the 3-ball that sealed the game for the Kings.

Bogdan Bogdanovic's Step back Jumper, that gave the Kings the lead with 30 seconds to go pic.twitter.com/zeA8kit9qS

As the Kings prepare for game four of the homestand, it doesn’t get any easier as they have to face the playoff bound New Orleans Pelicans led by All-Star Anthony Davis on Wednesday night.

Something that should be noted, the young players of Sacramento have shown this season that they can have ice in there veins when it comes down to the big shot. Bogdanovic, Fox, and now Labissiere have all hit game-winning shots this season.

Player of the Game: Bogdan Bogdanovic

Although Skal hit the biggest shot of the night, they would not have been in that position without the play of Bogdanovic. Bogy shot 7-for-11 from the field and finished with 22 points and 7 assists in just 27 minutes of playing time.

Player of the Game: Enes Kanter

Kanter played only 22 minutes, but he made the most of them. Doing work down low, Kanter finished with 14 points and 16 rebounds racking up his 31st double-double of the season. When Enes was in the game, he dominated the paint, fortunately for Kings fans, he didn’t see the floor as much as usual.

The Kings – who are 2-for-3 on this five-game homestand host the Pelicans on Wednesday night.

The Knicks stay on the West Coast and have to face the very tough Portland Trail Blazers in the Rose City on Tuesday night.

The Sacramento Kings two game winning streak came to a sudden end on Saturday night at Madison Square Garden in New York City when the Knicks – led by power forward Kristaps Porzingis – blew by the men in purple and white 118-91.

Early on, it looked like the Kings might make it a competitive game. By halftime, the Knicks (7-5) held a 64-49 lead. New York put together two big runs in the first half to establish the 15-point halftime lead.

The Kings (3-9) and Knicks second units made the fourth quarter interesting but Sacramento was unable to cut into the big New York lead. When the final buzzer sounded, the Knicks continued to impress the professional basketball world by playing so well without Carmelo Anthony on the team.

Prozingis continues to be “the man”

Second-year player – Kristaps Prozingis scored 34 points in just 26:37 minutes of playing time. He went 11-for-21 from the floor while hitting 4-of-6 from behind the 3-point line. Prozingis converted 8-of-9 opportunities from the free throw line. While accomplishing all of that, he committed zero turnovers.

11 Knicks players contributed to the win over the Kings

Enes Kanter posted a double-double with 17 points and 13 boards. He shot 8-for-13 from the floor.

Skal Labissiere became a force on offense again for the Kings as he recorded 19-points to lead his team in scoring for the game. The Kentucky product shot 5-for-10 from the field while going just 1-for-9 from behind the 3-point arc. Labissiere converted 9-of-10 free throw opportunities. He also grabbed six rebounds.

Buddy Hield came off the bench to score 17-points in 27-minutes of playing time. He went 6-for-13 shooting overall while hitting 4-of-5 from 3-point land. Hield also hauled in seven rebounds and dished out four assists.

No Sacaramento starter scored in double-figures.

The Kings will play the second game of their three-game road trip on Monday night in Washington, D.C. The Wizards destroyed the Kings 110-83 in Sacramento on October 29th.

The Knicks will also return to actions on Monday when they will welcome LeBron James and the Cleveland Cavaliers to Madison Square Garden. That game will have Eastern Conference Playoff implications. 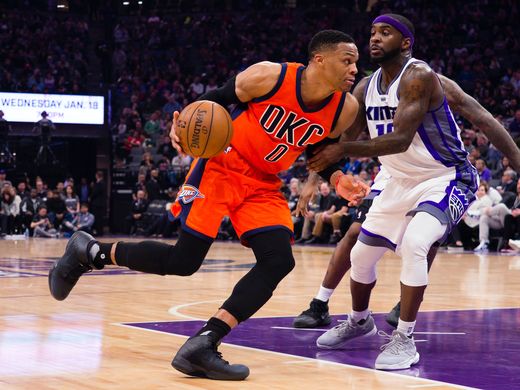 Sacramento — Stop me if you have heard this before. “Tough night. Tough game to watch. The guys (Kings) are playing as hard as they can,” Sacramento head coach Dave Joerger after watching his team lose to the Oklahoma City Thunder 122-118. The Kings actually cut the Thunder lead to just two points with 11-seconds to go in the game, but there was not enough time left to finish the potential comeback.

The Kings were down by 12 points with 2-minutes remaining in the game and it felt like things were over at that point. Three 3-point baskets by Tolliver, Collison and Gay along with three Oklahoma City turnovers allowed Sacramento to work their way back into the game. Literally, the Kings waited 60-seconds to long to start their comeback and have enough time to finish it with a positive outcome.

The Kings are playing hard. They are not giving up. They just do not have enough “____________” (fill in the blank with your own opinion because there are so many and no one idea seems to be the right one at this moment). There can be no doubt that something is missing. Be assured the Kings want to fix it. At this point, it must not be that easy to fix or the organization would do it immediately.

No team wants to be in playoff contention – and the Kings are still in ninth place one-game back of Portland even after this loss – with a record of 1-5 on a seven-game homestand. The Kings management, coaching staff and players want to fix whatever is wrong. At this point, they just have not been able to do so successfully.

What will the Kings do next? They have a multitude of options so predicting the next move is very difficult despite whatever anyone is saying. The one thing that is known at this point is the Kings want that eighth spot in the Western Conference Playoffs.

It was a long game on Sunday night

Early in his postgame comments, Kings head coach Dave Joerger talked about what a long game it was on Sunday night. In fact, Joerger said it felt like game went on for hours.

Add in timeouts, arguments by coaches and players plus video reviews and it was a long night for everyone

Stars of the game

Kings – Sacramento closes out the seven-game homestand versus the Indiana Pacers on Wednesday night at the Golden 1 Center. Sacramento is just 1-5 on the current homestand and would like to close it out on a positive note before heading out on a brutal road trip. The Kings will play eight games over 13 days on the road and will not be back in Sacramento until February.

Thunder – Oklahoma City has the second game of a back-to-back set on Monday night in Los Angeles against the Clippers. The Thunder will then head back to the Bay Area on Wednesday night to take on Kevin Durant and the Golden State Warriors in a nationally televised game.

OAKLAND — You think after having four days off would make you sluggish.

Fueled by a 12-0 run to open up the game, Golden State found themselves up 28-13 after the first quarter, 54-32 at halftime, and 85-57 before Utah outscored the Warriors 31-16 but it wasn’t enough as Golden State picked up their fourth straight win Friday night 101-88 over the Jazz at Oracle Arena.

Andre Iguodala led six Warriors in double figures with 17 points, Harrison Barnes finished with 14 points and 11 rebounds, Klay Thompson had 14 points, and Marreese Speights scored 14 points for the Warriors who shot 50 percent from the field (41-of-82).  The Warriors

Golden State, came into the game leading the NBA in shooting percentage (49.9), and holding opponents to an NBA-low 41.1 percent from the floor. Golden State held the Jazz to 42.7 percent (35-of-82) from the floor.

“We contested shots and made it difficult to pass the ball,” said Andrew Bogut. “We have good chemistry out on their on the floor.”

Bogut finished with 12 points on 6-of-8 shooting (his third straight game shooting at least 74 percent from the floor), and Draymond Green finished with 11 points and nine rebounds for Golden State (9-2), who are off to their best start since the 1972-73 season.

Stephen Curry, who is fourth in the NBA in scoring at 24.8 points per game, finished with just eight points, but dished out 10 assists and five rebounds.

The real story in the game was the Warriors commitment to not turning the ball over, which has been the team’s forte early in the season. Golden State dished out 19 assists to just two turnovers in the first half, before finishing with 28 assists and 13 turnovers for the game. The Warriors came into tonight’s game second in the NBA averaging 25.5 assists per game.

“I thought there was a little rust, offensively early,” said Warriors head coach Steve Kerr.” “I told the guys if we took care of the ball and share the ball, we can win a lot of games.”

Enes Kanter had 18 points, Rudy Gobert and Gordon Hayward scored 12 apiece, and Derrick Favors finished with 10 points and nine rebounds for the Jazz (5-8), who have lost their fourth game in their last six.

Trey Burke finished with two points on 1-of-8 shooting from the floor.

Golden State now will hit the road for five games in nine days that starts Sunday against an Oklahoma City (3-11) team that is missing it’s two superstars, Kevin Durant and Russell Westbrook.

SALT LAKE CITY — So much for the Warriors inability to win back-to-games.

Curry recorded his fifth 40-point game of his career, all on the road.

Harrison Barnes, starting for the injured David Lee, scored eight points, but shot 2-for-10 from the field. Lee sat out tonight’s game with a left shoulder and hip injury. The Warriors are off until Tuesday when they host the Charlotte Bobcats (21-27), which will allow their power forward time to get healthy.

Klay Thompson had 11 points, but was a dreadful 3-of-20 from the floor, while Andre Iguodala finished 1-of-6 from the field with four points.

Golden State held the edge in points in the paint, outscoring Utah 36-28 down low.

Alec Burks led all scorers for Utah with 26 points off the bench, while Enes Kanter had 15 points and seven rebounds for the Jazz (16-30).

Diante Garrett chipped in 13 points off the bench.

Golden State swept the season series from Utah (3-0), and have won consecutive games in Salt Lake City for the first time since 1981.

“We knew we need to win this game to validate last night’s (against the Clippers) game,” said Curry after the game.