HATO REY, PUERTO RICO–Right after Puerto Rico’s gut wrenching 5-4 loss to the Dominican Republic in the last game of this year’s Caribbean Series, some one asked José Valentín, the manager of Puerto Rico’s team, the Santurce Cangrejeros (Crabbers), how he felt about fellow Puerto Rican Lino Rivera managing the Dominican entry. Knowing that the two teams would face each other again, in the following day’s one and done semi-final, Valentín answered, “All I can see is that for one of us, it’ll be his last game.”

That following day was last night, and it was Valentín would managed his last game of the Series.

For a long time, it looked as if it would be the other way round. The Santurce Cangrejeros (Crabbers), representing the Island of Enchantment, got off to any early lead, but in a way that boded ill for the team’s hopes for the championship.

The Puerto Rican squad loaded the bases, with one out in the top of the second and Cuban right hander Yunesky Maya on the mound for the Dominicans. Roberto Peña then reached first on a bunt single-quite a move for a catcher-as Raymond Fuentes crossed the plate and the two other runners moved up a base. Henry Ramos smacked a hard single to right, driving in Ozzie Martínez, Jan Hernández following closely on his heels.

But Junior Lake made a magnificent throw from right field, but home plate umpire Emil Jiménez called the runner safe, to the mostly Puerto Rican crowd’s delight. That was the start of the foreboding, because review umpire Iván Mercado reversed the decision, killing the rally.

A walk,a single, and a stolen base, followed by Wilken Castillo’s infield single scored a run and put men on first and second with no one out. They moved up a base on an infield out. Gustavo Núñez hit what looked like a sacrifice fly, but Jan Hernández did his best Ramón Laureano imitation, and threw Abraham Almonte out at the plate. It was Junior Lake’s second inning throw to the plate all over again, down to the long wait before the the result of the replay was announced.

It was now the bottom of the eighth, and the bottom fell out of Puerto Rico’s chances. Facing number 13 Nicholas Padilla, Jordany Espín singled to right. Peter O’Brien sent him to third with a double to center. Francisco Cruz came into the game to relieve Padilla and uncorked a wild pitch, which allowed Espín to score and Alen Hanson, pinch running for O’Brien to advance to third. Almonte lofted a sacrifice fly to center, and the Domincan led, 4-3.

Fernando Abad, who had entered the game to get the final out in the top of the eighth, got the side out in the ninth and the win. It was a good game for players with Oakland connections. Jorge Mateo went one for three, raising his average for the Series to .250.

The Dominican Toros del Este take on the Venezuelan Lara Cardenales for the Series crown tomorrow night at 8:00. 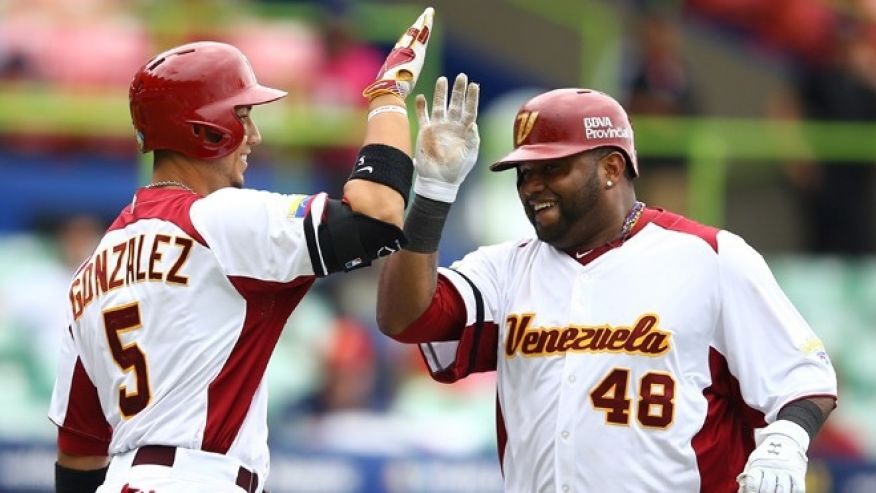 photo from foxnews.com: San Francisco Giant and Venezuela player Pablo Sandoval (48) gets congratulations as Venezuela continues to roll in the Caribbean Series in Puerto Rico

HATO REY PUERTO RICO–When the Cardenales (Cardinals) of Lara and the Toros del Este (of the east) began play a minute or two before 9:00 o’clock last night, they knew that, when the game of over, one of them would be the only remaining undefeated team after two days of play in this year’s Caribbean Series. The other would join the pack of three teams with records of 1-1, one game ahead of the lagging Panamanians, who had lost both of their conferences.

The Cardenales, Venezuela’s entry, was the team that emerged unscathed.

They scored early, if not often. A line drive double to right by Juan Apodaca plated Adonis García and ex-Giant Gorkys Hernández to give the Redbirds a two run advantage after two innings of play. An inning later, René Reyes’s sacrifice fly to right brought in Alexi Amarista with the third Lara tally, which proved to be the winning run.

The Toros waited until the bottom of the sixth to make their charge. A single by Jordani Valdespín, a walk to Junior Lake, and another single, this one off the bat of Abraham Almonte, and the Dominicans had cut Venezuela’s lead to 3-1.

Things looked pretty grim for the team from La Romana when they came to bat in the bottom of the ninth, after midnight and with Venezuela still leading, 3-1. But Peter O’Brien dropped a single to left, and, after Almonte and Alen Hanson had made outs, Jimmy Paredes single to center, bringing O’Brien around to third.

Wilkin Castillo then hit a rule book double that bounced over the right field fence and scored O’Brien, reducing the deficit to a single run. But the same rule that granted Castillo his extra base hit required that Gustavo Nuñez, running for Paredes, stop at third. This brought the Jorge Mateo to the plate. I like to tell you that the Athletics’ prized prospect singled in the tying and winning runs, but he didn’t. He flew out to left to end the game.

The contest featured some pretty good pitching. Venezuela’s starter, Wilfredo Ledesma went five innings, giving up one run on three hits, although his four walks left much to be desired. He was the winning pitcher. José Ascancio, Francisley Bueno, Hassan Pena, and Pedro Rodríguez combined to shut out the Toros over three innings, with Bueno being the only member of the quartet to allow a hit.

Ricardo Gómez, who got his second save in as many games, gave up a run and three hits in his only inning of work. Such are the vagaries of baseball statistics.

Jorge Martínez pitched two innings for the Dominicans and earned the loss, surrendering three runs on as many hits during his brief stint. Jhan Martínez, Edgar García, Anthony Carter, and Warner Madrigal, collectively, were magnificent. The shut down the strong Lara offense, not allowing a run and surrendering just four hits over seven innings.

It will be Panama against Mexico, Dominican Republic against Colombia, and Puerto Rico against Venezuela this morning, afternoon, and night.

On Headline Sports with Barbara Mason:

#1 Former Boston Red Sox David Ortiz is back home in the Dominican Republic after suffering a near assassination attempt. He said he’s glad to see his family again and is looking forward to eating his favorite foods again.

#2 Former Oakland A’s infielder Eric Sogard was with the Toronto Blue Jays this season and now joins the Tampa Bay Rays. The Rays were looking to boost their lineup. Sogard is hitting .300 this season.

#3 The Oakland A’s continue to battle in the AL Wild Card race they got a walkoff walk on Sunday when A’s hitter Khris Davis walked to force a runner in from third base with the base loaded for a 7-6 win over the visiting Texas Rangers.

#4 San Francisco 49ers quarterback Jimmy Garoppolo will start throwing against the scrimmage defense with pads on and head coach Kyle Shanahan will get an idea how everything should look as far as blocking is concerned.

#5 Oakland Raiders quarterback Derek Carr and wide receiver Antonio Brown are all set to throw and catch and make it happen in camp as they prepare for their first preseason game on Saturday Aug 10th at the Oakland Coliseum against the Los Angeles Rams.

Barbara does the Headline podcasts each Tuesday at http://www.sportsradioservice.com

ap photo: Fans at walk past a photograph of Boston Red Sox’s David Ortiz before a baseball game at Fenway Park in Boston, Oct. 1, 2016.

On That’s Amaury’s News and Commentary podcast with Amaury Pi-Gonzalez:

Big Papi (David Ortiz) is the face of those World’s Championships Boston Red Sox teams who won three World Series. In the Dominican Republic, he’s almost like a God, he could probably run for president and win. Let’s face it, Ortiz can run for president and win. Ortiz is an idol and the bad guys know that Ortiz had money there are kidnapping and robberies there and there really isn’t any solid proof why he got shot, but his publicist said that this was a hit job.

I have talked to Dominicans and it looks like a hit job it was premediated and these two guys came on motorcycles and they stopped by the bar restaurant that Big Papi was seated at. They shot Ortiz in the back and the other friend, whose a famous news anchor in the Dominican Republic, Ortiz was with.

Ortiz is resting in a Boston hospital resting after a long surgery. Doctors reportedly removed part of his spleen and liver and it has been reported that Ortiz is not out of the woods yet. Eventually, Ortiz will have to go through therapy and then he will probably have therapy for his mental well-being after going through something like this. One of the two suspects who fell of their motorcycle was caught by witnesses and beaten before police came and arrested him and he had confessed to the crime.

Amaury Pi-Gonzalez does News and Commentary each Tuesday and is the Oakland A’s Spanish play-by-play announcer at http://www.sportsradioservice.com