OAKLAND — The Raiders travel to Denver to take on fellow AFC West rival, the Broncos, Sunday at Sports Authority Field at Mile High to open divisional play for the Silver and Black.

Both teams are looking to get back into the win column after both losing on the road in Week 3.

Oakland (2-1) was humbled by the Redskins 27-10 in Washington on prime-time in a game that the Redskins held quarterback Derek Carr and the high-power Raiders offense to just 128 yards in 48 plays ran. The offense didn’t hit the 100-yard mark in total offense until the fourth quarter.

Carr had a game to forget, completing just 19-of-31 passes for 118 yards, one touchdown and two interceptions with a 52.9 passer rating. Tight end Jared Cook led all Oakland receivers with 43 yards on four receptions. Cook scored his first touchdown in a Raider uniform on a 21-yard pass from Carr.

Carr was also sacked four times, another rarity for the Silver and Black who only surrendered 16 sacks in 2016.  Oakland’s stout offensive line has already gotten Carr sacked six times this season through three games.

Oakland’s defense was paced by linebacker Cory James, who recorded a team-high 12 tackles and one forced fumble. Defensive end Khalil Mack recorded his second sack of the season while finishing with nine tackles on the night for Oakland, who allowed 472 yards offensively to Washington on Sunday night.

Washington starting quarterback Kirk Cousins torched the Raiders, passing for 365 yards and three touchdowns to zero interceptions. Cousins completed 25-of-30 passes and finished with a blistering 150.7 passer rating against Oakland, who couldn’t keep running back Chris Thompson at bay the entire night.

But the lack of production from Oakland’s top receivers was the real eye-popping issue from the game.

Washington’s secondary led by the trash-talking Josh Norman, the Redskins’ top cornerback, were in the faces of Raiders wide receiver Amari Cooper and Michael Crabtree. Washington held the duo in check, limiting Cooper and Crabtree to just two receptions for 13 yards on eight targets.

Crabtree and Cooper will have their work cut out for them again Sunday when they have Denver’s stellar pair of cornerbacks in Aqib Talib and Chris Harris Jr., lined up against them, especially when  Crabtree and Talib line up.

Who can forget when Talib ripped off Crabtree’s gold chain following a play in last year’s season finale, a 24-6 victory for the Broncos at home?

The Crabtree/Talib matchup could be the best one-on-one matchup within the game, and could prove to be the difference maker in a win for either team.

Denver (2-1) is coming off a 26-16 loss to the Buffalo Bills in Western New York last week. The Broncos defense recorded four sacks and held Buffalo to 272 yards of total offense. Linebacker Brandon Marshall recorded a team-high 10 tackles and one sack.

Outside linebacker Von Miller also posted a sack, but his 15-yard unsportsmanlike penalty on third-and-six after not helping up Bills quarterback Tyrod Taylor, which was an absolute joke, proved to be critical in aiding the Bills to victory.

Oakland has the ninth-best offense in the league, averaging 27 points per game.

Siemian finished with a 58.2 passer rating on the day.

With Kansas City sitting on top of the AFC West at 3-0 and both teams needing to keep pace, Sunday’s game is most certainly a must win.

After the embarrassing showing in Washington where many critics started to question the Raiders’ effort on national television, what team will show up in Denver?

The one that resembled a powerhouse team after vanquishing Tennessee and the New York Jets almost with ease?

Or the team that was hung upside down by their ankles in Washington, watching all of their lunch money spill out?

Oakland Raiders head coach Jack Del Rio, left, watches as quarterback Derek Carr, bottom, is tended to by trainers during the second half of an NFL football game against the Indianapolis Colts in Oakland, Calif., Saturday, Dec. 24, 2016. (AP Photo/Tony Avelar)

OAKLAND, Calif — With a playoff spot already in their back pocket, the Raiders have a chance to clinch the AFC West title with a win in Denver (or a Kansas City loss in San Diego) Sunday at 1:25 p.m. to close out the 2016 regular season at Sports Authority Field at Mile High.

But the 12-3 Raiders are going to have to go out and win the division (and the AFC’s No. 2 seed) without franchise quarterback and MVP candidate Derek Carr. Carr fractured his right fibula during Oakland’s 33-25 win over the visiting Indianapolis Colts in Week 16 on Christmas Eve.

The third-year quarterback completed 21-of-31 passes for 232 yards and three touchdowns before being helped off the field following a sack by Colts defensive end Trent Cole in the third quarter. Carr’s leg got stuck in the Oakland Coliseum turf as Cole spun Carr around, fracturing his right fibula. On the season, Carr passed for 3,933 yards, 28 touchdowns, and just six interceptions.

The loss of Carr is devastating for the Silver and Black as they embark on their first postseason appearance since 2002, but Carr’s backup Matt McGloin is a guy that is ready for the challenge of leading a very talented team.

“I feel great,” McGloin said this week via CBSSports.com. “I know this team, these guys around me, this staff and this organization will do a great job of helping me out, embracing me, and making sure we keep moving in the right direction.”

McGloin, who threw for 1,547 yards, eight touchdowns, and eight interceptions in six starts for Oakland in 2013, will have the same offensive unit that took down the Broncos 30-20 in Week 9 in front of the country on NBC’s Sunday Night Football in the first matchup.

In his career, McGloin has thrown for 1,847 yards with 11 touchdowns and 11 interceptions while completing 58.3 percent of his passes.

Starting running back Latavius Murray bludgeoned one of the league’s best defenses on 20 carries for 114 yards and three touchdowns that night in front of a sold out Raider Nation crowd at the Oakland Coliseum.

Rookie running back DeAndre Washington had career-day against the Colts, carrying the ball 12 times for a career-high 99 yards and two touchdowns, both for 22-yard scores that capped off four straight touchdowns for Oakland.

The tandem of Amari Cooper (78 catches, 1,110 yards, 4 TDs) and Michael Crabtree (84 catches, 956 yards, 8 TDs) are great weapons for the former Penn State quarterback to throw to.

Raiders head coach Jack Del Rio believes in the closeness of his team and the coaches.

Denver (8-7), who will miss the playoffs this year after winning the Super Bowl last year, is coming off a 33-10 loss to Kansas City (11-4) on Christmas Night at frigid and rainy Arrowhead Stadium.

Kansas City racked up 484 yards of total offense and held a 21-7 lead in the first quarter against the once vaunted Broncos defense, highlighted by a 70-yard touchdown run by rookie speedster Tyreek Hill and an 80-yard catch-and-run score by tight end Travis Kelce.

Both Hill and Kelce were named to the AFC Pro Bowl team as starters with Hill being named as a return specialist for his first selection of his career.

Hill, who has superb hands is second on the Chiefs with 56 catches for 547 yards and six touchdowns, has 497 yards on 38 returns including a 78-yard punt return for a score against Oakland in a 21-13 victory on Dec. 9 in Kansas City.

Hill also has an 86-yard kickoff return for touchdown that helped Kansas City take the Broncos in overtime,  30-27, in Denver on Nov. 27.

Kelce earned his second-straight Pro Bowl nod by having another impressive year for Kansas City  with 84 catches for 1,117 yards and four touchdowns.

The playoff-bound Chiefs are hoping that Denver can knock off Oakland because a Raider loss would give Kansas City the No. 2 seed and the first-round bye, and knock Oakland to the No. 5 seed where they would open the playoffs on the road in either Pittsburgh or Houston on Wildcard Weekend.

But the Raiders have shown that they can win on the road this season going 6-1 (well 7-1 if you count playing in Mexico City that was technically considered a Raider “home” game), but that was with Carr under center, not McGloin.

Second-year quarterback Trevor Siemian has surpassed the 3,000-yard passing mark for the first time in his career with 3,195 yards, but has engineered a Broncos offense that scores just 20.6 points per game, 20th in the league.

Siemian has thrown for 16 touchdowns and nine interceptions with a 83.9 passer rating.

But according to Broncos head coach Gary Kubiak, Siemian will share some snaps this Sunday with former  first round draft pick Paxton Lynch.

“I think Trevor deserves the right to go back out there as a starter,” Kubiak said via the Denver Post. “He’s done a lot of good things this year. He’s a young player that needs to keep going.

“I want him to get the Kansas City taste out of his mouth. It was a tough outing. Paxton is also going to play. I’m preparing both and you’ll see them both in the game.”

Just like Oakland, Denver have a premiere wide receiving corps with Demaryius Thomas and Emmanuel Sanders leading the way.

Both are tied for the team lead with five touchdowns a piece. 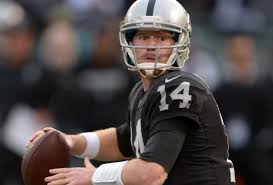