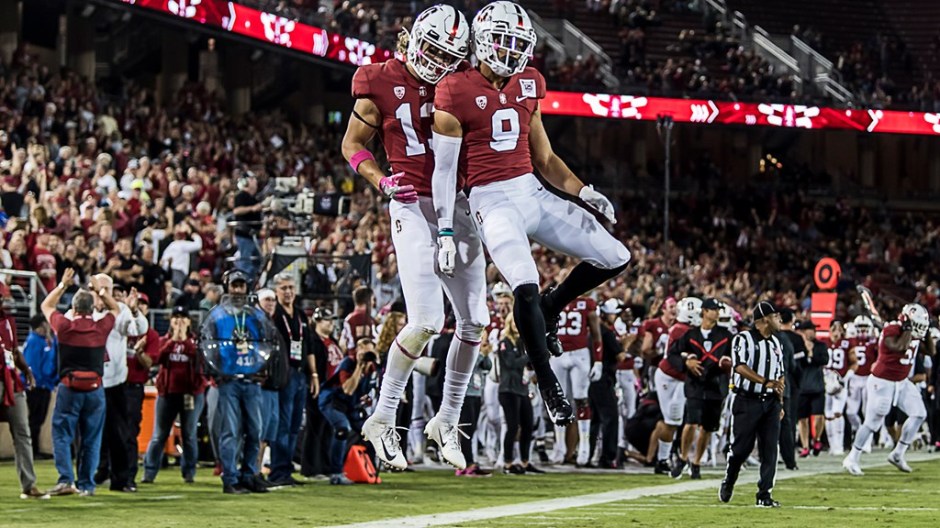 On the Stanford Football podcast with Jerry Feitelberg:

#1  Despite losing 10 key contributors from its two-deep depth chart and having five players out of the lineup, Stanford Cardinal (3-3) head coach David Shaw has taken his team and developed them into winning ways such as the way they were able to defeat the Washington Huskies (4-2), 23-13.

#2 Jerry talks about Stanford quarterback David Mills, who went 21-30 for 293 yards, and one touchdown.

#3 There was very doubt that coach Shaw and the Cardinal, who were 16.5 points underdogs against the Washington Huskies in the October 5th game, could pull this one off, but the defense was certainly key as the Cardinal won by ten points.

#5 How does Stanford quarterback David Mills stack up going against the Bruins defense and Chip Kelly’s game plan?

Jerry Feitelberg does the Cardinal podcasts each Thursday at http://www.sportsradioservice.com

elpasotimes.com: Players of the Pitt Panthers and Stanford Cardinal arrived at El Paso Airport on Wednesday in preparation for the Sun Bowl scheduled for New Year’s Eve.

On the Stanford Cardinal and Sun Bowl podcast with Jerry Feitelberg:

#1 Both the Pitt Panthers (7-6) and Stanford Cardinal (8-4) arrived in El Paso on Wednesday in preparation for the Sun Bowl. It’s the first time both teams have met since 1932.

#2 Wearing a Sombrero, Stanford head coach David Shaw dances during the Sun Bowl’s pregame festivities coach. Shaw danced while a mariachi band played. It’s been something of a tradition with coaches arriving to the Sun Bowl.

#3 KJ Costello quarterback for the Cardinal will get his chance to throw in the Sun Bowl, Costello during the 2018 season threw 263 for 396 for 3534 yards and 29 touchdowns.

#4 Stanford running back Bryce Love carried 166 times for 739 yards and six touchdowns. Love has chosen not to play in the Sun Bowl because he’s preparing to join the 2019 NFL Draft.

#5 Jerry sets the stage at the Sun Bowl and who he picks to win this Bowl game.

Jerry does the Stanford Cardinal podcast each Thursday at http://www.sportsradioservice.com Dec-27-2018

PALO ALTO, CA–Less than a year after Coach David Shaw was forced to step out of character, and heap platitudes on one member of his Stanford football team, the coach who preaches selflessness and teamwork, had to do it again.

This time Shaw had a plan, one he executed in his first utterings to the media after Stanford bludgeoned Arizona State, 34-24 on Saturday.

Love had himself a day, rushing for a school-record 301 yards and three touchdowns, surpassing the previous record of 284 yards, set by Christian McCaffrey in November. Love also became only the third FBS back since 2004 to top 1,000 yards rushing in his team’s first five games, joining Northern Illinois’ Garrett Wolfe (2006) and Leonard Fournette (2015).

Folks, that 1,000 yards just days after the official end of summer. Given that, Shaw couldn’t help himself. Like he did when describing the running style of the Heisman trophy runner-up, McCaffrey, Shaw had a few, additional things to say about the guy who last season was merely McCaffrey’s backup.

“He runs physical, he runs tough, and if he breaks a tackle, he’s gone,” Shaw gushed. “I’ve never seen anybody get hit and stumble and then get back up full speed. I’ve just never seen that before. It’s unbelievable.”

Unquestionably, this was the perfect storm, but that didn’t necessarily mean that Love would be perfect.  But he was.  Two weeks ago, Arizona State’s beleaguered defense surrendered 216 yards to San Diego State’s Rashaad Penny, and ASU Coach Todd Graham conceded during the week that Love would provide an even bigger challenge.

From Stanford’s perspective, quarterback stability is often the last piece to the puzzle, and they appear to have that, with K.J. Costello, the sophomore who made his first college start on Saturday, after his eye-opening second half of football against UCLA last week. Combine Costello’s emergence with the Cardinal’s offensive line having what Shaw said was their best performance to date, and Love was basically off and running from the opening kickoff.

Less than two minutes into the game, Love went 61 yards for a score, motoring past Sun Devils’ defenders like a speeding commuter on 101 during rush hour.

Early in the second quarter, Love knifed through the line, then broke outside on his way to a 43-yard score down the sideline.

Then early in third quarter, Love broke free up the middle, and ran 59 yards untouched for his final score.

“Every play that he broke, we had someone there, unblocked, and couldn’t tackle him,” Graham said. “You have to give him a lot of credit. He’s very, very good.”

But the run that had everyone talking was Love’s final one of the afternoon, a 7-yard run that was all effort and will, and ended with three ASU defenders with hands on the running back. 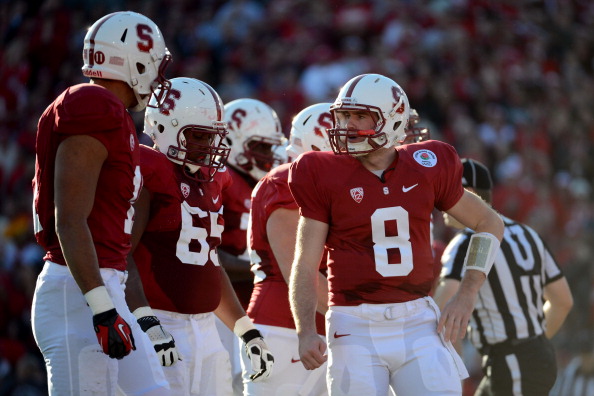 The Stanford Cardinal opens its 119th season against the San Jose State Spartans Saturday night at Stanford Stadium at 8pm. The game is known as the Bill Walsh Legacy game as Bill was a graduate of San Jose State and later coached at Sanford and the San Francisco 49ers.

This will be Stanford’s first game since beating Wisconsin in the Rose Bowl on January 1st, 2013.

The Cardinal has been ranked fourth in the nations in the pre-season Coaches poll. San Jose State has on win under its belt so far this season. The Spartans finished 11-2 last season and were ranked 22nd st the end of the year.

Stanford leads the series 51-14-1 and has won five straight and nine of the last ten meeting with the Spartans. However, Stanford cannot afford to take the Spartans lightly. The Cardinal had their hands full last year and just squeaked by winning 20-17.

Coach David Shaw is in his third year at the helm at Stanford. San Jose’s coach, Ron Caragher is in his first season as head coach but he has a record of 45-22 as a major college head coach.

Stanford’s offense will be lead by quarterback Kevin Hogan. Hogan took over the job as starting QB halfway through the season last year and led the team to the Rose Bowl crown. Running back Stepfan Taylor is gone but Coach Saw has said that he has capable replacements for Taylor. Shaw has filled holes on the offensive line and at tight end as well. Stanford’s defense is led by Linebacker Shane Skov and looks to strong again this year.  San Jose State’s offense is led by quarterback David Fales.

The Spartans defense is also strong as the held the potent Cardinal offense to just 280 yards of total offense.

Stanford is favored by 26 ½ points but the game should be a barnburner.