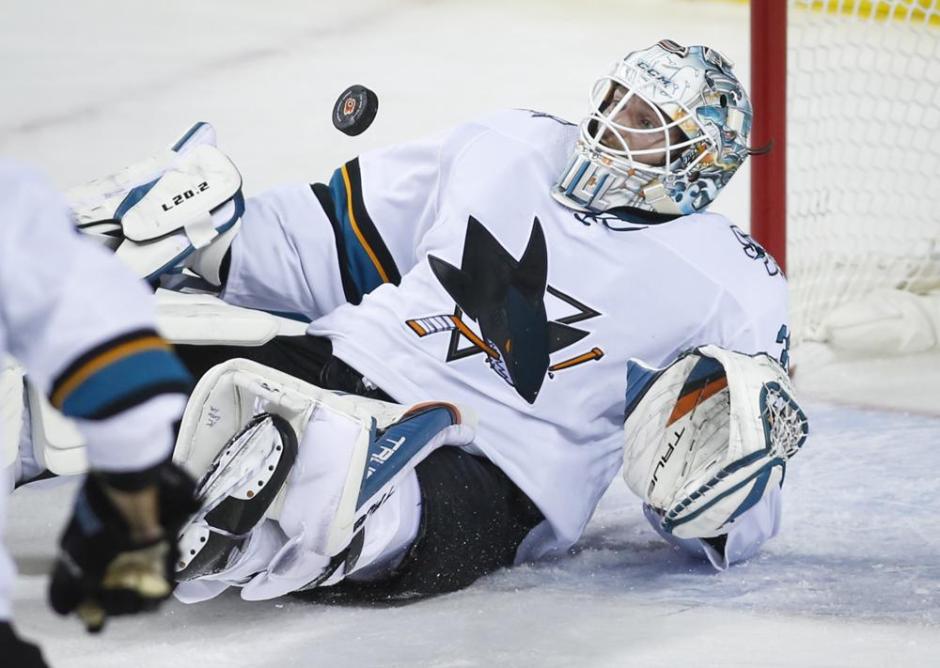 San Jose Sharks goaltender Adin Hill as seen here trying to defend against the shot in this Tue Nov 9, 2021 game against the Calgary Flames in Calgary is out and on the Covid 19 protocols list (Canadian Press via AP News file photo)

On the SJ Sharks podcast with Mary Lisa:

#1 Mary Lisa talk about the two latest San Jose Sharks players to be added on the Covid 19 list: Tomas Hertl returned on Tuesday and forward Jonathan Dahlen, and goaltender Adin Hill and how that will impact the Sharks line up.

#2 Defenseman Brent Burns has been removed from the Sharks Covid 19 protocols list how important is it for him to be back in the line up.

#3 Anytime you lose one of your goaltenders that critical and Hill will be out for Covid 19 quarantine for at least a week How much does it impact the Sharks to have a goalie like Hill out of the line up?

#4 The the coaches this quarantine situation has got to have head coach Bob Boughner rearranging game strategy each night.

#5 The Sharks face off against the Philadelphia Flyers (12-12-5) at SAP Center in San Jose on Thursday night the Flyers have lost eleven of their last 15 games. The Flyers did have a three game win streak after losing nine in a row. How do you see these two teams matching up Thursday night at SAP Center.

Join Mary Lisa for the Sharks podcasts Wednesdays at http://www.sportsradioservice.com

The NHL and NHLPA have agreed to not have players attend the 2022 Beijing Winter Olympics scheduled between Feb 5-22 and will make up postponed games during that time as announced Tue Dec 21, 2021 (image from Vegas Hockey Now)

On the Headlines podcast with Jessica:

#1 Jessica tonight we start with the NHL calling for this week’s leaguewide shutdown which was announced on Monday due to the positive coronavirus outbreak that has ten NHL teams facilities already shut before the shutdown was announced.

#2 The Holiday break was announced two days earlier and the NHL isn’t schedule to be back until Monday. Five games scheduled for Thursday has been postponed a total 50 games postponed this season.

#4 The NHLPA and the NHL have come to an agreement that no players will be participating in the 2022 Beijing Winter Olympics Feb 5-22. The NHL with it’s massive Coronvirus outbreak and travel between Canada and the US has been banned the NHL decided to not send players to Beijing. The NHL will use those dates to make up games that are currently postponed.

#3 Jessica, in women’s college basketball the U Conn Huskies 16 year steak of being in the top 10 is over. The Huskies lost to Louisville and dropped four places in the AP poll on Monday dropping to 11th. The last time the Huskies were in 11th place was back on Mar 7, 2005.

#4 Monday was also another brutal day for the NFL as 47 players were put on the Covid 19 list a record for one day since the pandemic began in 2020. Some of the 47 keynote players in the Covid 19 quarantine are Kansas City Chiefs tight end Travis Kelce, Los Angeles Chargers defensive end Joey Bosa and Detroit Lions quarterback Jared Goff.

#5 New York Giants quarterback Daniel Jones will be out for the rest of the season with a sprained neck injury. According the Giants head coach Joe Judge doctor recommended that Jones sit out the remaining three games this season after scans showed the extent of Jones’ neck injuries. 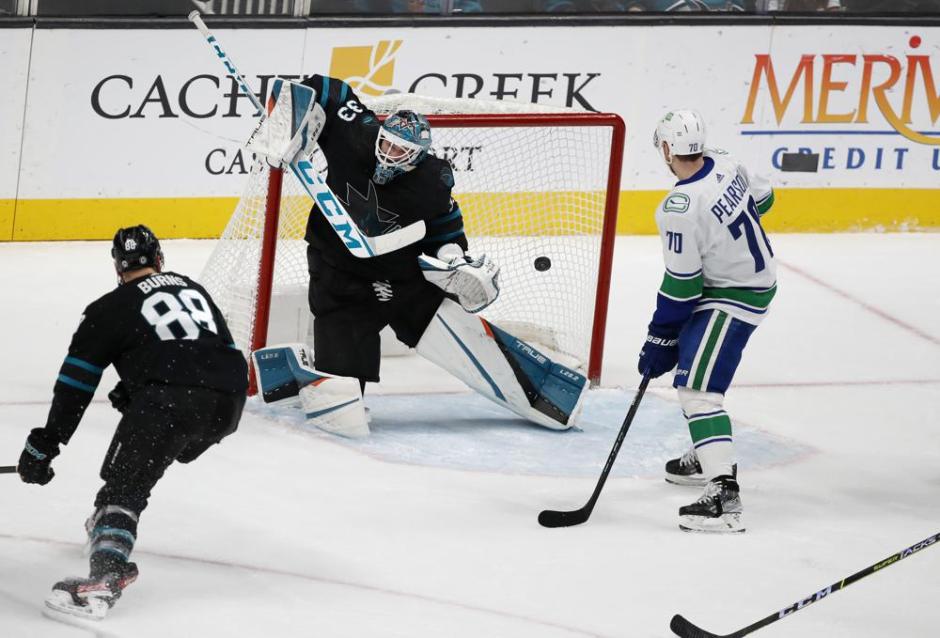 San Jose Sharks goaltender Adin Hill (33) can’t a glove on Vancouver Canucks center Bo Horvat (not shown) shot that turned out to be a goal. This was the Sharks last game with the Canucks last Thu Dec 16, 2021 at SAP Center in San Jose before this week’s games were postponed due to Covid 19 protocols. (AP News photo)

#1 It’s been frustrating for the San Jose Sharks with the postponement of this week’s games against the Vancouver Canucks (Tuesday) and Edmonton Oilers (Thursday) and Erik Karlsson says he not surprised what is happening.

#2 The Sharks, the NHL were busy trying to sort all the cancelations and the Sharks as it turns out will be off Wednesday through Saturday. The NHL has scheduled two games for Tuesday next week.

#3 Sharks head coach Bob Boughner said that the situation is amazing to see how it’s effecting the world and the NHL is no different. There will be no players headed to the 2022 Olympic in Beijing?

#4 Brent Burns who tested positive will remain out of action and is on Covid 19 protocols quarantine for ten days and must test negative twice before he’s allowed to return. Burns has played in 627 straight games.

#5 The Sharks next game is in Anaheim on Dec 27th is ten days after Burns joined the Covid 19 protocol list. Karlsson says while Burns will be missed it doesn’t change anything. Burns and Tomas Hertl are out for Covid 19 protocols.

Join Mary Lisa for the Sharks podcasts each Wednesday at http://www.sportsradioservice.com 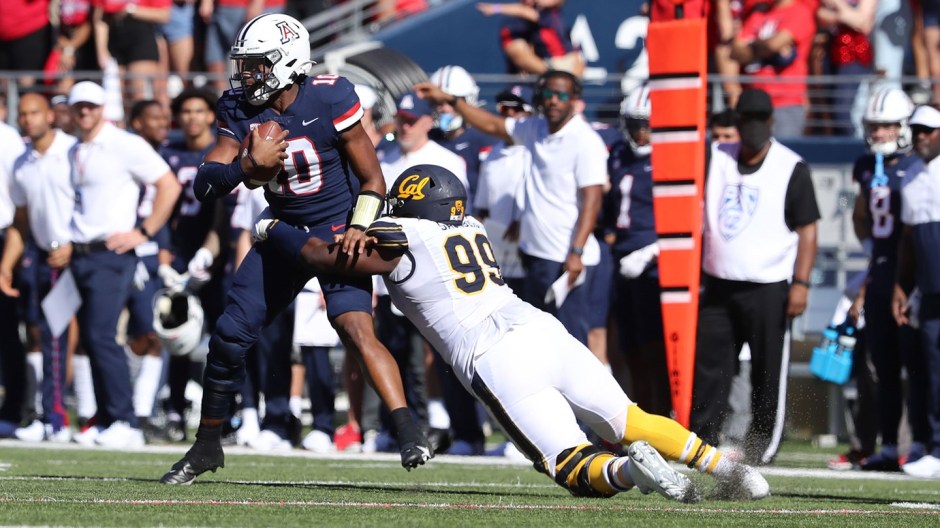 The Cal Bears Ethan Saunders defensive end (99) gets a sack on the Arizona Wildcats quarterback (10) Will Plummer on Sat Nov 6, 2021 at Arizona Stadium in Tucson (Cal Bears photo)

The Golden Bears (3-6) were without starting quarterback Chase Garbers, three starting offensive linemen, and three defensive starters, all held out of the game for testing positive. In addition, Cal assistant coaches Geep Chryst, Andrew Browning, Angus McClure and Tre Watson also tested positive and did not travel with the team, according to ESPN.

Cal issued a statement on Friday, announcing that 99 percent of its roster was vaccinated. The combination of positive tests and injuries reportedly left the Golden Bears with 42 scholarship players for the Pac-12 game.

The Golden Bears had two positive COVID tests earlier in the week, and the city of Berkeley then required the entire team to be tested on Wednesday, revealing the outbreak.

The COVID outbreak had a direct effect on the Bears’ offense. With the starting center, left guard and left tackle sidelined, backup quarterback Ryan Glover – a transfer from Western Carolina – completed 11-of-29 passes for 94 yards and was sacked four times. To compound matters, Cal gained only 28 total rushing yards on 24 carries.

After a scoreless first half, Arizona (1-8) took the first lead of the game on a 29-yard field goal by Tyler Loop with 6:25 remaining in the third quarter. Cal tied the game at 3-3 four minutes later when Nick Lopez, filling in for Dario Longhetto, booted a 34-yard field goal.

Arizona surged ahead with 2:21 remaining in the fourth quartert on Michael Wileuy’s 30-yard touchdown run.

The Wildcats’ top two quarterbacks, Jordan McCloud ad Gunner Cruz, were already out for the season. Three backups, Will Plummer, Jamarye Joiner and Luke Ashworth, each attemped at least one pass. Plummer had all 16 of Arizona’s completed passes on 28 attempts for 129 yards and one of three Wildcat passes intercepted.

#1 The Vegas Golden Knights and the San Jose Sharks series has been postponed for Feb 1 and 3 due to the Knight head coach Peter DeBoer; assistants Ryan Craig, Ryan McGill and Steve Spott; goaltending coach Mike Rosati; and video coach Tommy Cruz due to Covid-19 protocols.

#2 The Knights general manager Kelly McCrimmon and AHL Henderson coaching staff assisted McCrimmon on Tuesday against the St Louis Blues in a game that turned into a 5-4 shootout loss for the Knights without their first string coaching staff.

#3 The Knights Alex Pietrangelo and another member of the Knight coaching staff also entered quarantine for Covid-19 protocols.

#4 Matt this was supposed to be a home away from home series for the Sharks opening up their season home opener in Glendale after such a long road trip while it’s awkward the Sharks were looking forward to playing the series but will really have a home opener in San Jose now against the Anaheim Ducks after they finish road games in Anaheim and Los Angeles.

#5 In other NHL news I wanted to see if you could give us an update on Los Angeles Kings defenceman Matt Roy who was pushed into the boards after chasing down a puck with the Minnesota Wild’s Kevin Fiala right behind Roy during Thu Jan 28th’s game in LA. Roy went down after his head hit the boards with such force. Consequently Fiala was fined over $77,000 and suspended without pay for three games.

Join Matt each week for the NHL podcast at http://www.sportsradioservice.com