On Headline Sports podcast with Barbara:

#1 Manny Pacquiao thrilled them again last Saturday night. Pacquiao won and is now with a record of 62-7-2 and 39 KOs. It was a 12-rounder won by the 40-year-old Pacquiao.

#2 The Washington Wizards have offered guard Bradley Beal a three-year deal worth $111 million. Wizards general manager Tommy Sheppard said he wanted to sign Beal at the first opportunity he got.

#4 Is Derek Carr quarterback for the Oakland Raiders playing for his job? Or is he playing for someone else? The Raiders will be looking for a quarterback that can not only get them wins, but enough of them to get to postseason?

#5 Here’s the San Francisco Giants, who were living in last place most all season, but are now just 2 1/2 games out of first place for the National League Wild Card.

Barbara Mason does Headline Sports each Tuesday at http://www.sportsradioservice.com 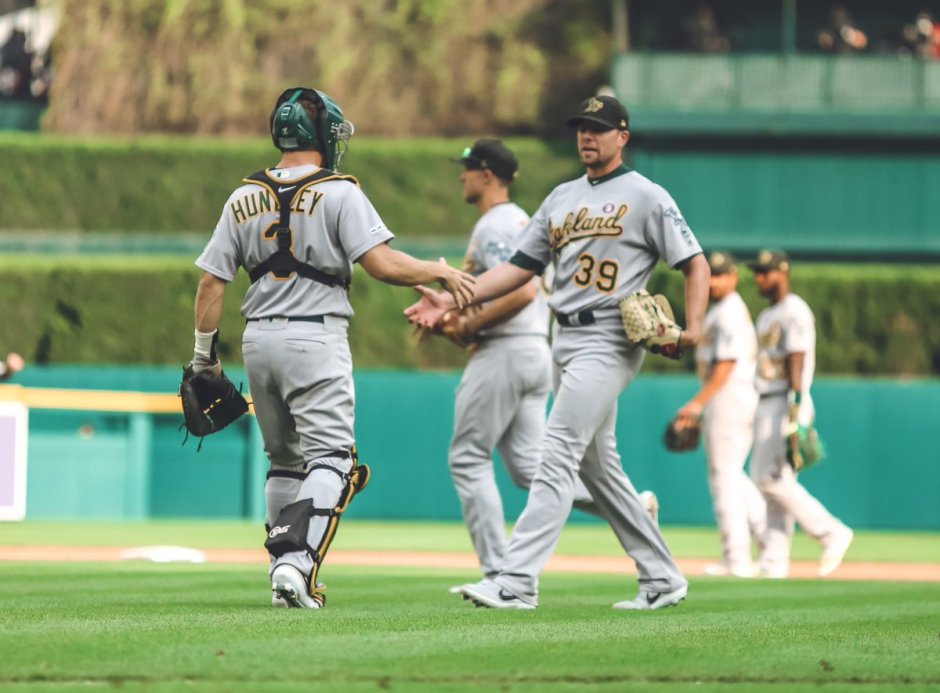 #1 Nothing cures the Oakland A’s like a road trip to Detroit. The A’s have won three of the four games after struggling to open the road trip in Seattle early in the week.

#2 The 4-1 win on Saturday over the Tigers marks their 15th consecutive win over Detroit.

#4 A’s catcher Nick Hundley hit a two-run homer to help the cause. Hundley has been a plus behind the plate and with the bat 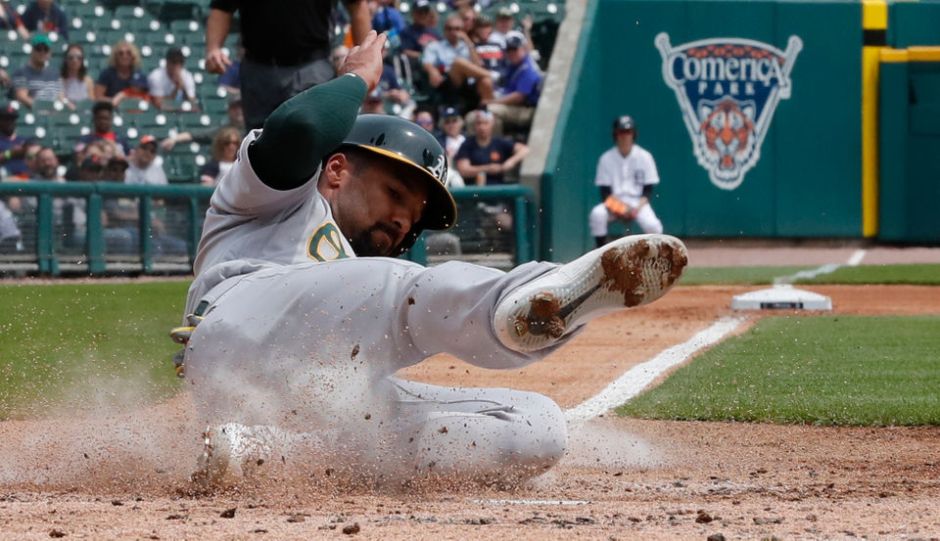 photo from expo.mlive.com: Oakland Athletics’ Marcus Semien scores from third on a wild pitch during the third inning of a baseball game against the Detroit Tigers, Thursday, May 16, 2019, in Detroit.

The Oakland A’s, who are having a hard time winning games away from home this season, found their offensive magic as they pummeled the Detroit Tigers 17-3 at Comerica Park on Thursday.

The A’s improved their road record to 6-15 and their pitcher, Chris Bassitt, pitched one of the best games of his career. Bassitt went eight innings and allowed just four hits and no runs. He threw 108 pitches in picking up his second win of the year.

The A’s, as a team, hit five home runs on Thursday. They hit five Monday night in Seattle, but lost the game. The homers in Seattle were all solo blasts. Thursday’s show of power included a grand slam, a three-run blast, two two-run shots, and a solo home run.

The A’s scored all the runs they would need in the third inning when they put six on the board. Left-fielder Robbie Grossman started the festivities going with a lead-off triple. A’s catcher Josh Phegley, who had four hits and four RBIs in the game, singled to drive in Grossman with the A’s first run.

Semien scored the second run on pitcher Spencer Turnbull’s wild pitch. Khris Davis struck out. Turnbull walked Stephen Piscotty to load the bases. Jurickson Profar deposited Turnbull’s ball into the right-field seats for his first career grand slam. The A’s lead 6-0. The A’s scored three in the sixth, four in the seventh, two in the eighth and two in the ninth.

Aaron Brooks pitched the ninth for Oakland, and he had a rough outing. Pitchers don’t have to be careful when leading by 17, but Brooks needed to show the A’s that he belongs on the club. He gave up three hits and three runs. The big blow was a blast off the bat of Dawel Lugo to drive in Nick Castellanos and Josh Harrison. Brooks stuck out Grayson Greiner for the final out.

Game Notes: The A’s won their ninth in a row at Comerica Park. Detroit has been outscored 41-9 while losing the first four games of a 10-game homestand.

A’s manager Bob Melvin had high praise for the play of Josh Phegley: “If you are looking for All-Star catchers this year, I don’t know anyone more worthy than Josh. He’s hitting close to .300, and he’s giving us homers and RBI. You don’t see that from the nine spot very often.”

Up Next: Frankie Montas (4-2, 3.78 ERA) will pitch Friday night for Oakland. Montas has been the most consistent starter for Oakland this year. Lefty Daniel Norris will be on the hill for Detroit. He’s 2-1 and has a respectable 3.63 ERA. Game time will be at 4:10 pm.

Detroit — The Oakland Athletics have been the worst road team in all of baseball several times this season. They have been strong defenders of their home field, but the road has been their nemesis. Since a major league team plays 81 of their 162 games on the road, learning to win in the other guy’s park is mandatory.

The Athletics embarked on this nine-game road trip to Boston, Philadelphia and Detroit needing to prove to themselves that they could win on the road, and that is exactly what they did.

Wednesday in Detroit was a crowing effort for the A’s

The A’s had won the first two games of the series in Detroit. They had compiled a 5-3 record on the road. With Wednesday being a day/get-away game to head back to the Bay Area, it would have been very easy to have a mental let down and just go through the motions to get out of town in order to get home.

They also swept the three-game series at Comerica Park and finished the nine-game road trip with a record of 6-3.

Bob Melvin was a happy manager after his #Athletics beat the #Tigers 3-2 Wed to sweep the series & go 6-3 on road trip. #MLB #kfbk #KCBSnews pic.twitter.com/YLVJChnppD

Pitching dictated the ultimate outcome of the game

Athletics starter Daniel Mengden threw seven shutout innings and extended his scoreless inning streak to 16-innings which is the longest for any A’s pitcher this season. He gave up no runs on seven hits. One of the big keys to his win was the fact that he did not issue a walk. Mengden struck out four Tigers. His record is now 2-1 with an ERA of 3.30.

Daniel Mengden pitched 7 shutout innings for #Athletics & gets win over #Tigers on Wed. It was his 2nd win in Sept. #MLB #MLBonFox #kfbk pic.twitter.com/EqBjfN47Ly

Ryan Dull came to relieve Mengden in the eighth inning and set the Tigers down in order. It looked like the final inning would be uneventful.

Dull came out for the ninth because Melvin was hoping to rest his overworked bullpen. Dull walked the first batter he faced — Efren Navarro. Mikie Mahtook then hit a 1-1 pitch from Dull for a double that moved Navarro up to third. Pitching coach Scott Emerson came out for a visit before Dull went back to work.

Dull struck out the next batter he faced — pinch-hitter Tyler Collins — for the first out of the inning. Andrew Romine then stepped into the box and hit a single to right that drove Navarro and Mahtook home to make it a 3-2 game.

That was all for Dull as Bob Melvin brought Liam Hendriks in from the pen. There was also an injury delay as catcher Bruce Maxwell had to come out of the game after taking a ball off the mask. He was replaced by Phegley.

Hendricks was able to get Jose Iglesias to ground into a force out that erased Romine and left Iglesias at first on the fielder’s choice. With Alex Presley batting, Iglesias moved up to second on a wild pitch. Presley struck out swinging to end the game.

Hendricks was credited with a save but more importantly he put up a “Goose Egg” meaning he did not allow a run to score.

Tigers starter Anibal Sanchez pitched six-innings and allowed just one run (earned) on three hits. He walked three A’s and struck out eight. Sanchez threw an incredible 115 pitches (68 strikes). He was also tagged with the loss, so his record falls to 3-5.

The big problem for Detroit was their bullpen failed in its effort to throw “Goose Eggs”. Daniel Stumpf took over Sanchez in the seventh inning and gave up the two-run home to Marcus Semien that was the ultimate difference maker in the game.

Joe Jimenez and Zac Reininger each worked an inning of relief for Detroit and both posted “Goose Eggs” in the run column.

Marcus Semien was the man for Oakland in the big win on Wednesday. He not only hit the game deciding two-run home run in the seventh inning, but Semien posted all three of the Athletics RBI. In the series, he went 4-for-10 and scored four runs.

Catcher Bruce Maxwell went 2-for-4 in the game with a double and two runs scored. He is now hitting .315 in day game versus .205 under the lights. Guess who is catching the day games? Also, the initial reports are that Maxwell does not appear to have a concussion from the foul tip that caused him to leave the game in the ninth inning.

The Athletics scored three runs on six hits and left seven men on base. Their record improved to 69-83.

Nicholas Castellanos hit a single in the sixth inning which extended his hitting streak to a career-high 17 games. He hit .346 against the A’s in 2017.

Efren Navarro hit a single in the second inning that upped his hitting streak to five games. He now batting .400 — 6-for-15 — with a double and triple during the streak.

The Athletics left for the Bay Area right after the game and will have Thursday off. The A’s begin a three-game series in Oakland with the Rangers on Friday night. RHP Kendall Graveman (5-4, 4.39) is scheduled to start for the Athletics. Texas has not named their starter.

The Tigers continue their homestand on Thursday as they begin a four-game series with the Twins.