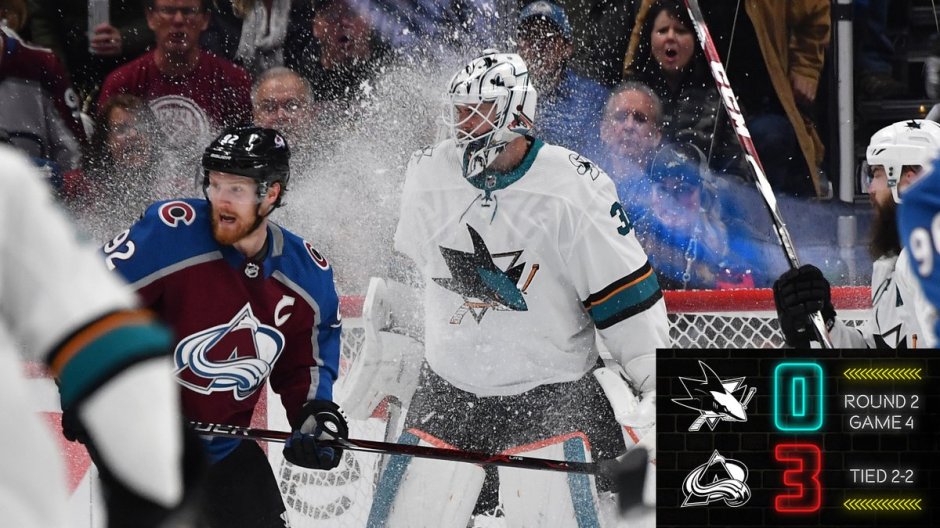 The Colorado Avalanche tied their second round series with the San Jose Sharks by winning in 3-0 in Denver on Thursday. Their goal scorers were Nathan MacKinnon, Colin Wilson and Erik Johnson. It was MacKinnon’s sixth of the playoffs, and his second in this round against the Sharks. Philipp Grubauer made 32 saves for the shutout win, while Martin Jones made 25 saves in the loss.

Sharks forward Logan Couture blamed turnovers for the loss: “I thought we turned way too many pucks over. Way too many, handed them goals off turnovers inside of our blue line, and just bad decisions with the puck.”

Five Sharks had three or more shots on goal, and they had more than one breakaway Thursday.

The game was remarkably even for the first half. Shot counts were within two in each period, there were no penalties in the first and two per team in the second. The Sharks won 53% of the face-offs in both of the first two periods.

After the game, Sharks head coach Peter DeBoer said: “It was one of those games I thought, half way through, you know, I kind of had the feeling whoever was going to score first was probably going to win. And you know they got the goal, they got the energy they started to grab some momentum, win a few more battles than we were winning from that point on. But I really felt the game was right there at least up until that point.”

The Sharks’ first power play was cut short by an overlapping penalty to Kevin Labanc. That raised some eyebrows since Erik Karlsson had been conspicuously tripped while he carried the puck through the neutral zone, in full view of most observers. That was not called, which would have given the Sharks a two-man advantage.

The first goal came in the middle of the second period. It was scored by Nathan MacKinnon on a second effort, after Jones had already stopped a nice attempt. Cale Makar shot the puck for a deflection by Mikko Rantanen, and Jones stopped that with his mask, but the rebound went off of Burns in front of the net. Burns tried to knock it away from the net, but didn’t get all of it, so it started to fall down to the blue paint. MacKinnon was close enough to knock it past Jones.

The second Colorado goal came on a power play that saw Justin Braun in the box for tripping Alexander Kerfoot. A clearing attempt by Brent Burns was cut short by Colin Wilson and fell to Gabriel Landeskog to carry back in. The Sharks’ penalty killers were caught a little off kilter and, in a scramble by the net, none of them could get control of the puck again. It trickled out of traffic to Wilson, who had an open net by then. Assists went to Rantanen and Landeskog.

At 8:05 of the third, Braun went to the box again after a careless high stick that caught Colin Wilson in the face. Seconds before that penalty was to expire, Brent Burns joined Braun in the box for hooking Samuel Girard. The Sharks were doing a great job killing the first penalty, were in fact all south of the center line attempting some short-handed offense. Girard got past Burns and Burns got his stick up around Girard’s arms as Girard closed on the Sharks net. That gave the Sharks 14 seconds of five-on-three to kill.

The Sharks did kill it off. In the last two minutes of the period, they pulled Jones for an extra skater. Two goals in two minutes was unlikely even with six skaters. Instead, Colorado got their third of the night, put into the empty net by Erik Johnson. Assists went to Matt Calvert and Matt Nieto.

Around the nine-minute mark of the third, Nyquist went down in a collision with MacKinnon and required some attention from the trainer. He did not miss much game time, if any, for that. The Sharks shortened their bench once again in the third period. Joakim Ryan did not skate in the third and Lukas Radil only had one shift. Micheal Haley and Marcus Sorensen also had their shifts cut down.

Amid the hubbub of Olympic roster announcements Tuesday, the San Jose Sharks had a game to play in Nashville. They lost 3-2, but made a game of it despite yet more changes to their lineup, including the loss of Logan Couture to injury. Couture is scheduled for surgery, and is expected to be out for three to four weeks.

The Sharks were still without Tommy Wingels (upper body), Martin Havlat (lower body), Tyler Kennedy (flu) and Tomas Hertel (knee). No reinforcements were coming from the old list of injured, no Raffi Torres, no Adam Burish. Freddie Hamilton had just been sent down to Worcester, while Matt Nieto, Bracken Kearns and Eriah Hayes stayed with the big club. Hamilton was called right back up.

The game was an opportunity for new players to step up. One always wants a win, but it is not surprising that recently-arrived players in new positions, with new linemates, will probably need more than one practice to get in sync. Seeing the team find some cohesion as the game wore on should make the loss a little more palatable.

A failure to call goaltender interference in the second period made the Predators’ game winning goal count. The official explanation was that Marc-Edouard Vlasic had pushed Colin Wilson into Antti Niemi. Todd McLellan said a few words about that after the game* (from CSNCA broadcast):

Even if there was a touch of contact there, you’re not allowed to jump on top of the goaltender. We all know that, there’s a lot of people that understand that, but… it happened.

The game started out inauspiciously, when Joe Thornton was called for hooking just ten seconds into the game. The Predators’ power play was ranked 7th in the league. The Sharks’ penalty kill was ranked 14th. The Sharks killed the penalty, despite some failures to clear.

At 8:57, Matt Cullen was called for interference on Jason Demers, putting the Sharks on the power play.  It was an unspectacular power play. They only mustered one shot with that man advantage.

Possibly the Sharks’ best chance of the period came in the final minute, when Matt Nieto passed the puck from the blue line to Patrick Marleau in the slot, with Joe Pavelski in range of a rebound. Apart from that, the first period was a grind, at least for the Sharks.

The Predators kept them well to the outside whenever they gained the offensive zone. At the end of the period, the Predators led 10-7 in shots on goal and 9-4 in faceoffs.

At 6:11 of the second, David Legwand opened the scoring to give the Predators the lead. Joe Thorton and Jason Demers were both trying to move the puck away from Craig Smith but the puck got through both of them. Legwand got behind Demers and put a shot past Antti Niemi on the far side. It was Legwand’s first goal in 11 games. Assists went to Smith and Shea Weber.

The Sharks answered a few minutes later with a power play goal, after Mattias Ekholm was called for delay of game at 6:11. Joe Pavelski tipped a Dan Boyle shot from the blue line to tie the game. It was Pavelski’s 19th goal of the season, his 10th in the last 14 games. Assists went to Boyle and Demers.

Less than a minute later, the Predators retook the lead. Despite good pressure from Justin Braun, Ekholm got a backhand shot off, with good traffic in front of Niemi. The assist went to Legwand. It was Ekholm’s first NHL goal.

The Sharks didn’t score on their next power play, when Nick Spaling was called for holding the stick at 13:38 of the second. Nevertheless, the Sharks’ third power play was miles better than their first. The new lines seemed to be finding a groove.

The Predators outshot the Sharks through the second period as they had done in the first, 13-10.

Brent Burns drew a hooking call on Shea Weber with a driving play that gave the Predators a scare at 4:05 of the third period. The Sharks held the zone for about 45 seconds before the Predators could push the first power play unit out of the zone. The next good chances fell to Bracken Kearns on the second unit. The Sharks had four shots on that power play.

With under two minutes left and the Sharks’ net empty, Nieto found Marleau in front of the net for a tip in to make it 2-3. Assists went to Nieto and Demers. Todd McLellan used his time out shortly thereafter, but the Sharks ran out of time.

*More of what McLellan said about that non-call:

Does it make it tougher? That’s a blown call, and we played 44 games, I go back to the Buffalo blown call in overtime, I go to the blown call in Winnipeg. I go to one against Minnesota, and I go to another one tonight, and that’s one in every eleven games. And I understand mistakes, because I make a lot of them behind the bench. But when you get an explanation from a group of people and it didn’t happen, it’s disappointing. It really, really is disappointing. And there’s also a protocol to follow in our league. That protocol is you get together and you discuss it. That didn’t happen either. So obviously I’m not very happy with it.