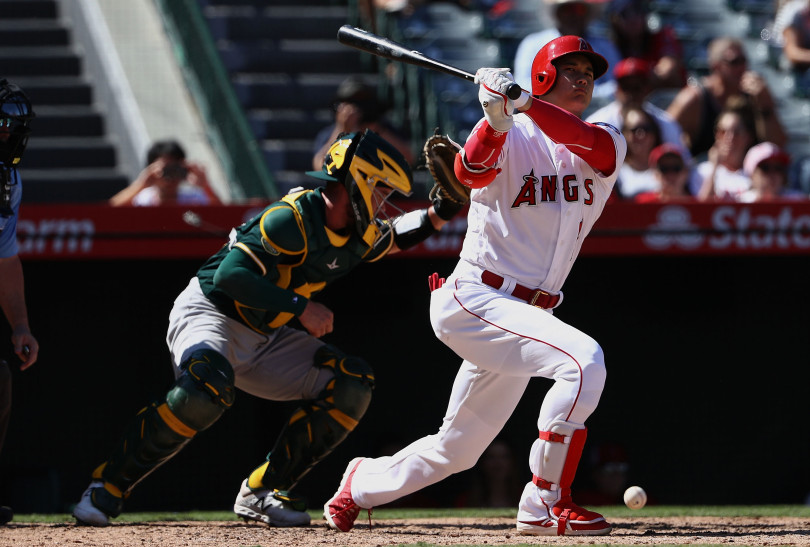 The hottest 92-game stretch in the history of Oakland A’s baseball concluded on Sunday, and it did finish anywhere near the manner in which it started.

Taylor Ward’s two-run homer off Chris Hatcher capped the Angels’ ninth inning rally sending Oakland to a 5-4 season-ending loss. The rare bullpen failure left the A’s with a rather ordinary 8-8 record over the final 16 games of the season.

But prior to the average conclusion to the season, the A’s won 55 of 76, leapfrogging everyone in the AL West and the wild card races except the Yankees and the Astros. From mid-June when the A’s were 34-36 and languishing in fourth place, they developed an identity as a hard-hitting club with a penchant for taking over games in the late innings. Once they established the identity, they never lost it, even after the final pitch of the season wasn’t anything near what they would have expected.

Afterwards, both clubhouses rejoiced–for far different reasons–something that never happens when one club walks off on the other.

“Shoot, we’re thrilled with where we are at this point, and now the fun starts,” manager Bob Melvin said in acknowledging that his club is turning it’s attention to Wednesday’s wild card matchup with the Yankees. “It’s not like the season hasn’t been fun, but the postseason is a different level, so everybody is excited about getting out there.”

In the Angels’ clubhouse, the mood was light as well, as their club had a win to celebrate, and a celebrated career to acknowledge. After the game, manager Mike Scoiscia confirmed that he would be stepping down, ending one of the longest managerial stints in the history of the game.

“He’s the only manager I played for, so it’s tough seeing him go,” Angels slugger Mike Trout said of Scioscia. “But like he said, it’s time for a change. It was fun playing for him. The passion he had for the game, to win. He always put the players in a great position to succeed. I can’t thank him enough.”

“To be honest, I had very little to do with today’s game,” an emotional Scioscia said. “I’ll point to Alfredo to JP, and Dino brought it home the last three innings. They did all the work. But it’s fun. You know what’s fun? To see Taylor Ward go through the growing pains and doing something. To see this team down by a couple and three hits later, we’re in here with music blaring. It’s just a great team win.”

Stories circulated at mid-season that Scoiscia’s 19th year at the helm would be his last, but he refused to acknowledge any of it. But with the season on its last day, Scioscia informally stepped aside, allowing his bench coaches–one by one–to manage Sunday’s contest. Despite the fact that the Angels have had no postseason success since 2009, and just concluded a second, consecutive 80-82 campaign, Scioscia goes down as the only manager in the club’s existence to win a World Series (2002), and a guy who made aggressive baserunning and instinctive management of his pitching staff his calling cards. Even the notorious Rally Monkey of Angels Stadium would have to concede to Scoscia’s mark on the organization.

An emotional press conference was Scoiscia’s opportunity to express his gratitude, and even at age 59, leave the door open to managing again in the future.

“I love managing. But in this game you never know if, where or when an opportunity comes. And I’m fine with that. If something comes and I get another chance, great. If not, believe me, I’m going to take the great experience I had here.”

It took four hours and 15 minutes, 11-innings, 13 pitchers, 34 baserunners, 17 hits, four home runs and one controversial video replay to bring game two of the three-game series between the Athletics and Yankees to a conclusion on Saturday afternoon.

In the bottom of the 11th inning with two out and runners at first and second, the Yankees Neil Walker stepped into the batter’s box to face A’s relief pitcher Chris Hatcher who entered the game in the 10th inning. Walker hit the first pitch to him from Hatcher into center field. Gary Sanchez took off from second base at the crack of the bat and never had any goal in mind but to score the winning run. Mark Canha’s throw was off-line and Sanchez scored the run for a 7-6 New York walk-off win.

Oakland thought the game might be over in nine innings

In the top of the ninth inning, the Yankees brought in the fire-balling Aroldis Chapman to shut down the A’s. It became apparent immediately that Chapman did not have his usual unhittable, strikeout “stuff” on Saturday. After loading the bases on three consecutive walks, Chapman was able to strikeout Mark Canha.

Jonathan Lucroy was inserted as a pinch-hitter for catcher Bruce Maxwell. Lucroy was 1-for-9 versus Chapman with the one hit being a home run. Lucroy hit the first pitch from Chapman into shallow left field. As Brett Gardner caught the ball, the Athletics Matt Olson tagged at third and headed for home. Yankees catcher Gary Sanchez moved about three-feet up the baseline, caught an on-target throw from Gardner and made a sweeping tag at Olson who was sliding toward home plate. Home plate umpire James Hoye called Olson safe without hesitation. The Yankees immediately challenged the call on the field.

The replays made available to television made it look like Sanchez did indeed make the tag except for one crucial angle where it looks like the catcher misses the tag. The replay center overturned the call on the field. It became an inning-ending double play.

Personal opinion inserted here: I hate replay in all sports. You have professional officials on the field to calls. Let them do their jobs. Yes, they will make some mistakes. over the course of a 162-game season, all of the mistakes will balance themselves out. Review your history if doubt my opinion.

The Athletics and Yankees will wrap up this three-game series on Sunday in the Bronx with a 10:05 AM PDT first-pitch. Oakland will send LHP Brett Anderson (0-1,8.68) to the mound to face the Yankees RHP Luis Severino (5-1,2.21).

Oakland – Both teams deserved to win this game. That line is overused by sports reporters around the world, but on Saturday night at the Coliseum, it was the truth. The Baltimore Orioles and Oakland Athletics put on game-winning performances in their 12-inning affair but in baseball, there are no ties. The A’s won the game 2-0.

The Athletics left the field with their 17th victory of the season after designated hitter Khris Davis hit a Pedro Araujo 3-1 pitch halfway up into the seats in left field with Jed Lowrie on at first with no outs in the bottom of the 12th inning. Unbelievably, the A’s never had a runner in scoring position during the entire contest. It is not often a team is going to escape with a win and never had advanced a runner to second base, but there was nothing usual about this game.

Trevor Cahill started the game for Oakland. Cahill set the tone for the game in the top of the first inning when he struck out the first three Orioles he faced. He struck five of the first six hitters to come bat against him. Cahill looked unbeatable on the mound.

Cahill would go on to work 6.0-innings and record 12 strikeouts while walking just one Baltimore batter. That tied Cahill for the second most strikeouts in six or fewer innings in Oakland history.

Cahill did not give up a run and allowed just four hits. He threw 98 pitches (58 strikes). Manager Bob Melvin indicated the plan was for Cahill to work seven innings but he did not want the righty to exceed 100 pitches.

The other phenomenal story was Baltimore starting pitcher Kevin Gausman who entered the game with a record of 2-2. Gausman pitched a career-high nine innings and threw 113 pitches (66 strikes). He began the game throwing 89 mph and his last pitch of the contest registered at 98 mph on the radar gun.

Gausman threw nine shutout innings allowing just two hits while striking out six Oakland batters and walking two. It was a pitching performance that would normally have resulted in a victory.

The real irony for both of these starting pitchers who performed so well was they both recorded a no-decision for the game.

Relievers were key in this game

The Orioles will send RHP Alex Cobb (0-3, 9.68) to the hill to faceoff against the Athletics RHP Andrew Triggs (2-1, 5.20). This will be Cobb’s fifth start of the season. His last start versus the Angels was his longest outing of the year when he pitched 6.0-innings. Cobb has allowed 10 hits in three of his starts and allows just over five runs per appearance.

Triggs will make his seventh start of the season for Oakland. He made the start last Tuesday on the road in Seattle. Triggs pitched 4.2-innings in that game giving up four runs (all earned) off six hits. He struck out four hitters and walked three while throwing 89 pitches (49 strikes). The A’s went on to lose that game 6-3.

First pitch is scheduled for 1:05 PM.