The Cal Bears Matt Bradley (20) puts some defense on the Nicholls State offense. Bradley led Cal with 26 points in the Bears first win of the 2020-21 season (calbears.com photo)

It had been 275 days since the Cal Bears had played at Haas Pavilion so it has been a long time coming. Monday night the Bears played their home opener taking on Nicholls State. Cal was leading at half-time 23-18. The Bears sealed the deal with a strong second half surge winning by the score of 60-49. Cal outscored Nicholls in the second half 37-31.

While the Bears did trail early by a slim margin 4-3 they really turned it around going on an amazing 18-2 run inside of nine minutes in the first half. Nicholls made it interesting when they tied up the game at 23 early in the second half. It was a 3-pointer by Brandley that put the Bears ahead for the remainder of the game. They never looked back taking this game by a comfortable margin.

The Bears now have a 2-1 record after beating Northwest WA handily while dropping one to Oregon State for their only loss this season. The Bears will meet their biggest challenge Thursday night when they take on Arizona State. That game will also be played at Haas with tip-off at 7:30. The game will be televised on the Pac-12 Network. calbears.com photo: Haas Pavilion Berkeley home of the Cal Bears will sit empty until next basketball season next fall and when the Coronavirus epidemic is lifted which is expected at it’s earliest by the end of March or the beginning of April

#1 Cal won that last and final game of the 2019-20 season with a win over the Stanford Cardinal on the night before all NCAA games were suspended putting the Bears and Cardinal and the NCAA in an uncharted position never seen before.

#2 Over the weekend it finally sank in all games in the NCAA for 13 tournaments and the NITs will not be planned.

#4 Women’s basketball hasn’t started the selection process yet and men’s has only began to put the bracket together but now it’s not possible that the games will be played.

#5 For the students a double whammy not only their classes are all canceled but now but their teams are now on hold until this virus breaks.

calbears.com photo: The Cal Bears Paris Austin who led Cal in scoring with 18 points takes the ball up court against the Oregon State Beavers on Saturday night in Corvallis

By Michael Duca and Morris Phillips

The Cal Bears (13-18) on Saturday night lost their leading offensive player in Matt Bradley to foul trouble with 2:30 left in the game after an exchange with the Oregon State Beavers (16-13) Gianni Hunt that got Bradley a technical foul. Cal also lost the contest 74-56.

Bradley scored 23 points looking back on his game against the Beavers on Feb 1st could only muster eight points last night at OSU. For the Bears Bradley has consistently put up double figures every game this season but the Beavers defense frustrated him all Saturday night to just those eight points and most likely flared him up at the end of the game to get the technical.

In the first half of the game the Beavers keyed in on him and Bradley could only get one three pointer towards the end of the half. The Bears Paris Austin finished first in scoring with 18 points followed by Kuany Kuany with 11.

Beavers seniors Tres Tinkle and Kylor Kelly who were honored in the last regular season game went out and scored a combined 43 points for Tinkle 24 points and for Kelly 19 points. Tinkle got a hug from his father OSU head coach Wayne Tinkle after Tinkle left with 51 seconds left in the game.

#5 Stanford finds themselves in a very strange place on a two game losing streak coming off loses to USC and then Cal. The Cardinal face the Oregon State Beavers (12-8) they’ll be heavily relying on Oscar da Silva and Daejon Davis for tonight’s game.

Join Jerry Feitelberg for the Cardinal podcasts on Thursdays at http://www.sportsradioservice.com

#4 In the Australian Open on Sunday and won again on Tuesday, defending champion Naomi Osaka went 6-2, 6-4, to go onto defeat Marie Bouzkova on day one. Osaka faced Saisai Zheng in the second round.

#5 The Cal Bears and the Stanford Cardinal men’s teams tip off on Sunday at Haas Pavilion for Pac 12 basketball. The Bears are coming off two tough loses to USC and UCLA meanwhile the Cardinal lost to USC and beat UCLA

#2 Just a huge lack of offense by the Bears scoring only 40 and even though the Bruins weren’t setting any scoring records either the Bears just couldn’t break the glass ceiling at Pauley Pavilion.

#3 The Bears in the second half just couldn’t muster any scoring getting only 19 points was this a matter of just a bad offensive night or the Bruins found a way to hold Cal back?

Morris Phillips does the Cal basketball podcasts each Monday at http://www.sportsradioservice.com 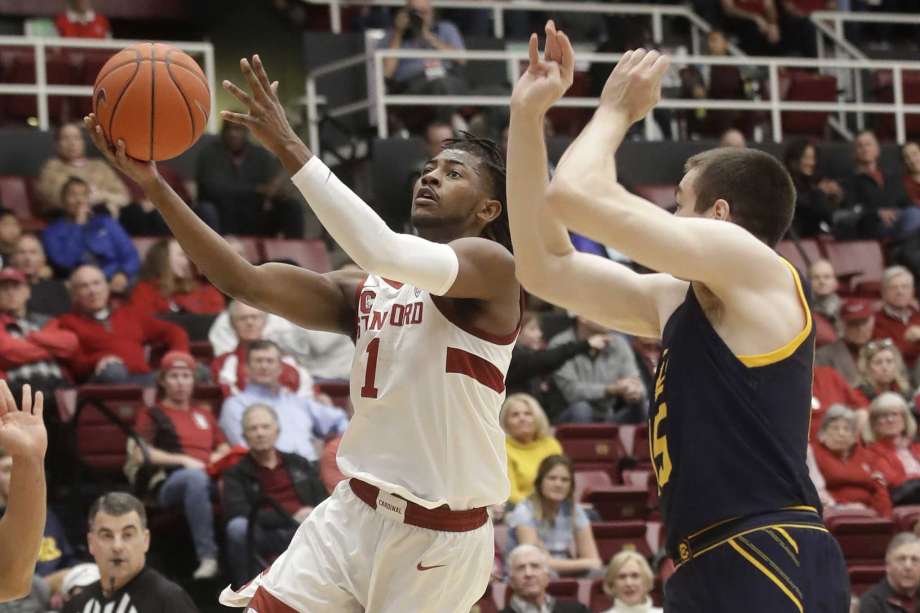 Stanford took advantage of a poor shooting night for California Thursday, as the Cardinal won their Pac-12 men’s basketball conference opener 68-52 over the Golden Bears at Maples Pavilion.

Forward Daejon Davis continued his strong season for Stanford (11-2 overall, 1-0 Pac-12), hitting 7 of 15 from the field, along with 3 of 6 3-pointers, for a game-high and season-high 20 points. He also had three steals, five assists and six rebounds.

Tyrell Terry was next in the Cardinal scoring column with 14 points, including 3 of 4 behind the arc. Jaden Delaire and Oscar da Silva each added eight points for Stanford.

The Cardinal made only two of its first 12 shots before making 11 of their next 19 attempts, a run that was capped by a Delaire 3-pointer with four seconds to play in the first half. Stanford led 32-21 at the break.

Defensively, the Cardinal held the Bears’ top two scorers – Matt Bradley and Kareem South – to a combined 2 of 17 floor shooting for eight points by the early stages of the second half. Bradley led Cal with 13 points.

One area of concern for Stanford is turnovers. The Cardinal have averaged 13.7 turnovers through their first nine games before committing 19 miscues in their previous four games.

The win snapped a streak of three losses in conference openers, and put Stanford back on the winning track after suffering a 72-56 home loss after winning its first eight games at Maples Pavilion.

Stanford has a week off before hosting Washington next Thursday. 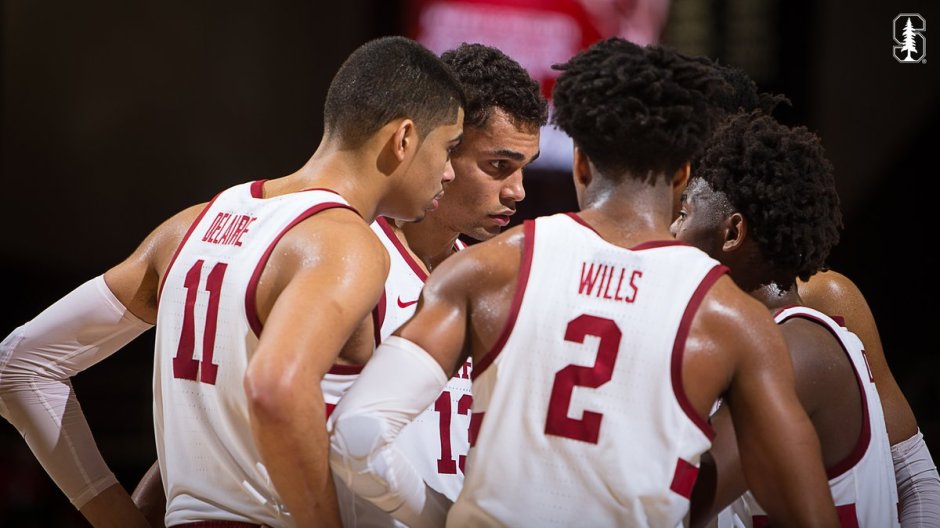 On the Stanford Cardinal podcast with Joey:

#2 Dorian Pickens was key for Stanford’s last season’s lead as he led with 18 points and the Cardinal who behind 16 points came back against Colorado showing the Cardinal trying win these games against Colorado. The Buffaloes rattled off six points with Tyler Bey’s help.

#3 Cormac Ryan did not play. He continues to sit out with ankle concerns.

#4 Sophomore Oscar Da Silva scored all of Stanford’s first eight points, which included a pair of threes in the first five minutes.

#5 The Cardinal next head to Berkeley to take on Cal on February 3rd in the first of three road games.

Joey Friedman does the Stanford Cardinal basketball podcast each Friday at http://www.sportsradioservice.com

photo from sfgate.com: Santa Clara forward Hendrik Jardersten (3) dunks the ball against Cal during the second half of Monday night’s game at Haas Pavilion in Berkeley

On the Cal Bears basketball podcast with Miguel:

#1 A big welcome to Cal (2-3) freshmen Matt Bradley and Andre Kelly. Can they get better with Bradley and Kelly in the lineup?

#2 In the Bears’ 78-66 victory at Haas Pavilion Monday night, Darius McNeill told Bears head coach Wyking Jones to let him stay in the game. Turns out there was a method to the madness as McNeil was feeding Bradley and Kelly, who helped score some important points.

#3 It was Bradley’s 13 points of the Bears 15 points in the final 6:33 of the game that pulled them away from the Santa Clara Broncos.

#4 Jones said that it was the players trust in each other and passing the ball that made a difference in this one.

#5 The Bears’ tipoff against the St. Mary’s Gales (2-5) Saturday night in Moraga with the Gales on a slide. Can the Bears take advantage of the Gales with home court advantage?

Michael Duca does the Cal Bears basketball podcasts each Friday at http://www.sportsradioservice.com