LOVELAND, Colo.  – The San Francisco Bulls (2-3-1-0) lost to the Colorado Eagles (4-2-0-0) 6-2. The only highlights for the Bulls were that Dale Mitchell and Mark Lee extended their four-game point streaks while on the other side of the puck, Kyle Ostrow recorded a hat trick for Colorado.

The Eagles controlled the first and second period of the game as they went up 4-0 on a pair of goals by Kyle Ostrow and individual goals by Ray Sawada and Trent Daavettila. The only highlight of the first two periods for the Bulls was when goalie Tyler Beskorowany stopped Kevin Ulanski’s short-handed penalty shot attempt with 1:38 left in the first period.

Dale Mitchell put the Bulls on the board, 4:43 into the third by beating Eagles netminder Marc Cheverie and make it only a 3 goal lead but then Alex Hudson scored his first goal of the game to bring it to a four goal lead again. Kyle Ostrow then netted his third goal of the game and made it a 6-1 lead for the Eagles. Mark Lee scored on a power play with 5:42 left in the game but by that time it was already too late and the Bulls fell to the Eagles 6-2.

The Bulls wrap up the finale of the three-game series against Colorado tomorrow at 6:05 p.m. 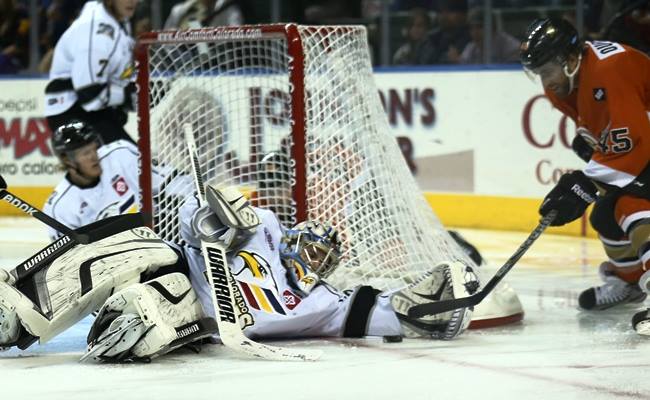 LOVELAND, COLORADO-The San Francisco Bull (2-2-1-0) were defeated by the Colorado Eagles (3-2-0-0) on Wednesday night at the Budweiser Events Center.

Colorado came out on fire in the period. The Eagles got on the bored first with a goal by Luke Fulghum. the score came at 2:10 in the first period and put the Bulls in an early hole. The score remained 1-0 Colorado heading into the first intermission.

San Francisco tied that game at one goal apiece in the second period. Dean Ouellet and Mark Lee earned the assists on a goal made by Dale Mitchell at the 4:35 mark in the period. The score remained tied until less than two minutes left in the period. At 1:55 Colorado regained the lead with another goal from Fulghum, it was his second of the game. The Eagles went into the second intermission and third and final period with a 2-1 advantage.

The Eagles scored two more goals in the final period to end the game with a 4-1 victory. The goals were scored by Kevin Ulanski and Kyle Ostrow.

The Bulls will be back on the ice on Friday against Colorado once again. The puck will drop at 6:05 pm.