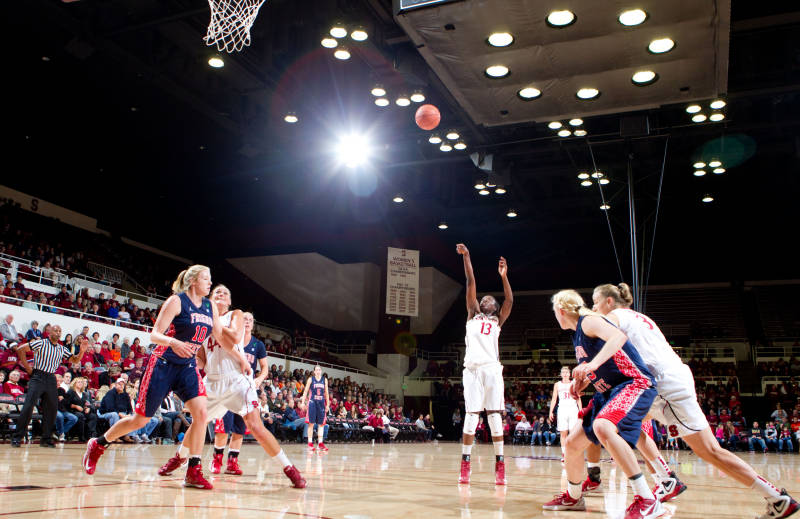 After a first round bye, the Stanford Cardinal started their weekend in Seattle with a win.  The top-seeded Cardinal beat the Buffaloes of Colorado by the final score of 69-54 on Friday afternoon to move on to the semi-finals in the Pac-12 tournament.

The Buffaloes earned their contest with the Cardinal by beating the UCLA Bruins by the score of 76-65 on Thursday. They came out to play on Friday, as they held the Cardinal to it’s worst scoring first half of the year at 21 points.  The Buffaloes went into halftime leading 23-21, however a strong second half performance for the Cardinal would earned them the victory.  The key difference for Stanford was starting the second half on a 16-2 run, which was good enough for them to hold the lead the rest of the game.

The starters for the Cardinal were extremely impressive, as four of them got into double digits in scoring.  The Pac-12 player of the year, Chiney Ogwumike, paved the way for the Cardinal putting up 19 points and rebounding 11.  This was after Ogwumike was held to only six points in the first half.  Bonnie Samuelson and Lili Thompson each added 15 points.  Mikaela Ruef had another amazing performance and has a double double to show for it, as she scored ten points, and led the team in rebounds, bringing down 16.  After Amber Orrange had one of her most impressive performance of the year this previous Sunday, Friday afternoon was a way different story.  The Junior Point Guard scored three points on four shot attempts.

The Buffaloes were led by Brittany Wilson, who notched 16 points, with 12 of them coming from beyond the three-point line.  Wilson also put up the most shot attempts of any Colorado player, as she went 5 of 20.  11 of the 20 shots came from three-point range.  Haley Smith was the only other Colorado scorer to get into double digits with ten.  Arielle Roberson led all players in rebounds with 17, she would end just two points shy of the double double.

With the win, the Cardinal are unsure of their next opponent, as they will find out in the upcoming hours. They will take on the winner of the contest between Southern California and Arizona State for a chance at the final on Sunday.