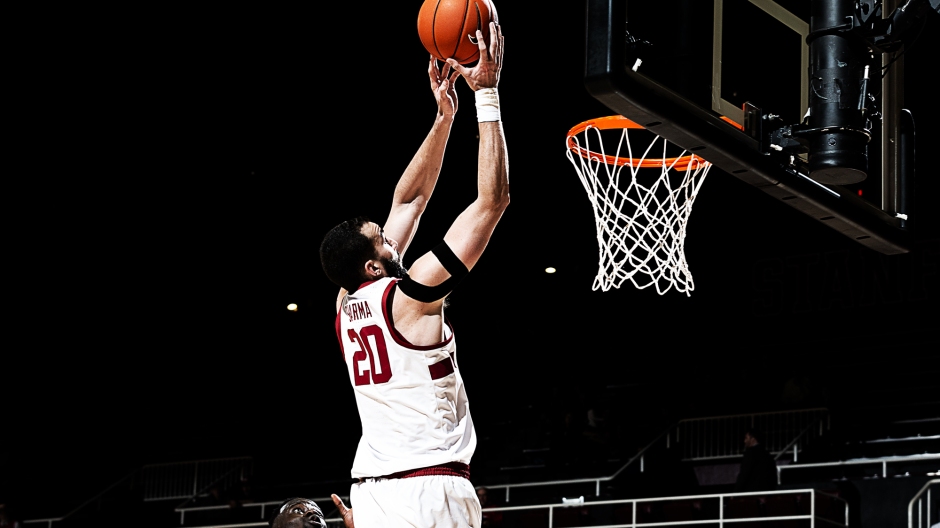 gostanford.com photo: Stanford Cardinal Josh Sharma goes up for the throwdown against the Long Beach Matadors at Maples Pavilion on Saturday night

PALO ALTO — Coming off a loss to an outstanding San Francisco Dons team on the road, Stanford (now 7-5 on the season) returned to Maples Pavilion for their final game of the 2018 calendar year and their final game of the non-conference schedule against Long Beach State (now 5-10 on the season). Star freshman guard Cormac Ryan remained out for the third consecutive game with an ankle injury, giving freshman Jaiden Delaire his first career start in the win. Stanford was successful in avenging last year’s road loss to the Long Beach State 49ers by the score of 93-86.

The game remained tight throughout the first half as copious turnover and fouls committed by both teams stunted any runs. The Cardinal and The Beach exchanged small advantages with Josh Sharma and KZ Okpala leading the team with 9 and 8 points in the half, respectively. Sharma also collected 10 rebounds in the first half, setting a career record. Stanford would take a 37-36 lead to halftime.

Long Beach State’s lead with the score 45-43 was their last of the night as Stanford caught fire and, on the back of a pair of Oscar da Silva 3-pointers, went on a 13-1 run, which put the score at 56-46 with less than 14 minutes left in the game.

The Beach didn’t go quietly, however. Stanford’s free throw shooting down the stretch allowed for the 49ers to crawl back to within two points with under a minute to go. Bryan Alberts, who finished with 22 points (6-13 from beyond the arc), nailed a pair of 3s while Temidayo Yussuf, who finished with 13 points (5-7 from the field), added 6 points of his own in the closing minutes to narrow the gap. Towards the end of the game, Stanford shot 5-19 from the charity stripe.

Down by 3 and with a chance to tie the game with under 10 seconds left in the game, Long Beach State head coach Don Monson tried to call a timeout to presumably set up a play for his team on offense but was unsuccessful at getting the referees’ attention. Subsequently, Long Beach State threw up a poor, air-balled shot on their final possession. Monson was understandably irate with the referees which drew a pair of technical fouls and an ejection from the court. Stanford padded their lead in the closing seconds with the fouls shots.

Josh Sharma finished the game for the Cardinal with his first career double-double. He set career-highs in both points and rebounds, blowing his previous career highs out of the water. He finished with 23 points and 18 rebounds.

Daejon Davis, who had 17 points and 5 assists for the Cardinal, left the game with an apparent ankle injury with about seven minutes left in the game. Head coach Jerod Hasse said he does not know the extent of the injury.

KZ Okpala and Jaiden Delaire each had 20 points and 10 points, respectively, in the win.

What’s next?
Stanford will open Pac-12 Conference play with the LA schools as the Card head south for games at UCLA on January 3rd and at USC on January 6th.