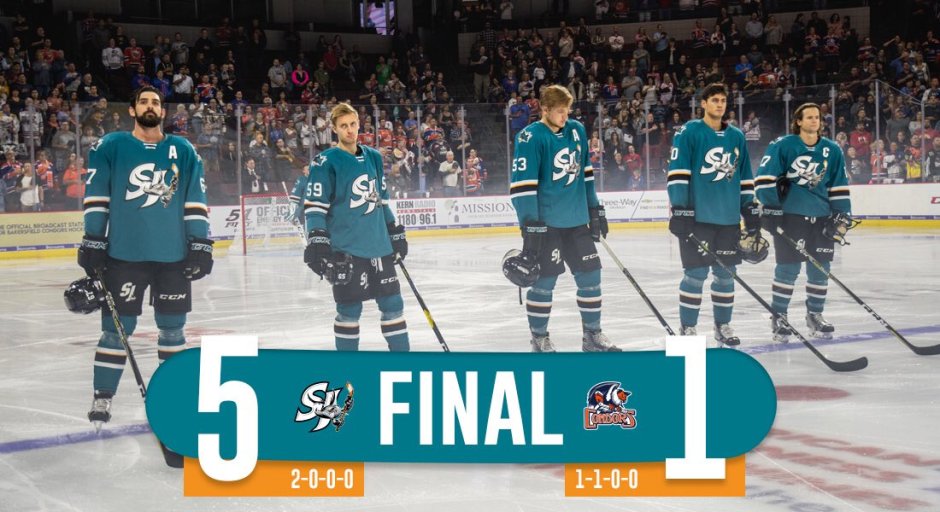 The San Jose Barracuda had hoped to keep the win streak going after heading to Central California to take on the Bakersfield Condors at Rabobank Arena on Saturday night. But did the Cuda apply pressure on the rival Condors?

Prior to the puck drop, San Jose announced its starting lineup against Bakersfield.

Cuda goalie Josef Korenar made his first AHL start tonight. Korenar had some good looks from the get-go, including the notable save he made to prevent a Condor forward from scoring an early goal in the opening period.

The Cuda and Condors were in a scoreless deadlock after 20 minutes of play. Shots were 14-9 in favor of Bakersfield.

Despite being the new kid on the ice, Korenar–a Vystrkov, Czech Republic native–made yet another notable save to keep things scoreless in the second period.

The Cuda made it a 1-0 game on Jayden Halbgewachs’ first goal on the season just 4:03 into the second period. Nick DeSimone and Vincent Praplan collected the assists on Halbgewach’s goal.

The Cuda continued to pour in the goals just 2:56 apart at the 11:08 and 13:04 marks of the second period. Maxim Letunov scored his second (unassisted) goal on the season and then Cavan Fitzgerald followed suit with his first goal on the season. Alexander True and Manuel Wiederer collected the assists on Fitzgerald’s goal.

The Condors halted the Cuda’s hopes of achieving a shutout 5:46 into the third period. Josh Currie scored his first goal on the season. Cameron Hebig and Cooper Marody collected the assists on Currie’s goal.

The Cuda, however, bounced back with two goals after the first half of the third period. DeSimone scored his first goal on the season. Francis Perron and Jeremy Roy collected the assists on DeSimone’s power play goal following Keaton Middleton’s penalty for elbowing. Shortly after, Perron scored his second goal on the season. Vincent Praplan and Jacob Middleton collected the assists on Perron’s goal.

The Cuda defeated the Condors 5-1, so it didn’t matter Bakersfield outshot San Jose 38-31 after 60 minutes of play.

Korenar picked up his first AHL win, finishing with 37 saves on 38 shots and one goal allowed in 59:42 minutes. Condor goalie Dylan Wells absorbed the loss, making 26 saves on 31 shots and five goals allowed in 59:56 minutes.

Your three stars from Bako

Notes
Familiar face
After failing to make the playoffs in all three years of its existence, the Oilers relieved Gerry Flemming of his duties and appointed former Sharks and Oilers’ assistant Jay Woodcroft as the head coach of the Bakersfield Condors this offseason. Woodcroft was an assistant under Todd McLellan with the Sharks for seven years before following McLellan to Edmonton the last three seasons.

Rookie arrival
Dylan Gambrell collected three points (two goals, one assist) in the first 16 minutes of Friday’s 4-1 win over the Reign. The rookie forward appeared in three games with the Sharks last season after the conclusion of his junior year at the Denver University, where he won a National Championship in 2017. His impressive AHL debut earned him first star honors.

Youth movement
The Barracuda opened up the 2018-19 season as the AHL’s youngest roster with an average age of 22.7 years old, which is comprised of 10 rookies. 13 players on the Cuda’s 25-man opening night roster skated in at least one game for San Jose a year ago.

Big trade
On June 14, Sharks GM Doug Wilson traded forward Adam Helewka to the Coyotes in exchange for 6-foot-5, 235-pound defenseman Kyle Wood. Two seasons ago, Wood was named to the AHL All-Rookie team after collecting 43 points (14 goals, 29 assists) from the blueline. Wood collected a pair of assists in Friday’s 4-1 win over Ontario.

National pride
With the offseason signings of Vincent Praplan (Switzerland) and Lukas Radil (Czech Republic), along with the return of Captain John McCarthy, San Jose’s opening night roster will be comprised of three different skaters who competed at the 2018 Winter Olympics in PyeongChang, South Korea.

Up Next
The Cuda will return home to host the Condors in a rematch on Wednesday, October 10 at 7:00 pm PT.

as interviewed by Sports Radio Service

DALY CITY–The win by the San Francisco Bulls in Bakersfield on Tuesday night 5-1 was a badly needed win and the Bulls were shut out twice once each by Idaho and Utah at home during their six game losing streak. The Bulls really needed a score and Dean Ouellet delivered scoring his fourth goal of the season and they basically dismantled Bakersfield after that. Bulls head coach Pat Curcio made some very quick moves and adjustments to his roster he waved Riley Emerson and traded Damon Kipp defenseman to Idaho and that’s where Tyler Gron came from who scored two goals on Tuesday in Bakersfield and another on Wednesday night against Bakersfield at the Cow Palace.

Curcio picked up another defenseman signing a rookie Kalvin Sagert and he played pretty well in Bakersfield and the other forward he acquired and Gron was the big star he got an assist and two goals in the game in Bakersfield and it’s very impressive because he actually scored against San Francisco this season but he did a lot of damage last season so it’s reason to see why Curcio was happy to get him. So far this season he’s only got points against the top three teams in the west Alaska, Stockton and Ontario.He’s a great asset to have hope it doesn’t go the other way of the top scorers  for the team who have been injured at a relentless rate so it could happen.

Getting Gron should help San Francisco next time they face Idaho on Saturday March 29th the move to get forward Andrian Foster and everybody had a great game in Bakersfield and Bakersfield is not exactly the toughest competition in the west but the Bulls really needed that confidence because they were shooting like crazy in all of those loses before because nothing was going in the goal. It seems like that might have given him a boost we’ll have to see if that works out in the long run.

Bobblehead promotion for Pat Curcio: Wednesday nights tends to be the lowest nights for attendance for the Bulls at the Cow Palace and this was a great promotion idea to boost attendance and they will give away bobbleheads on two more home Wednesday night games this season. The bobblehead is a great collectors item and the other two bobbleheads coming up are for Dean Ouellet and Rawhide the mascot.

So Wednesday is a great time to come because hey you get a bobblehead this season.

San Jose Sharks update: The San Jose Sharks Brett Burns is tremendous asset but a lot of the other lines that were performing well before he came back are still performing well. It lifted the team up but Burns needs a little bit of time to really hit his stride because he is such a phenomenal player so it will be exciting to see that growth again it was a tough injury he was out for a long time and unsettling and it’s good to have him back but the rest of the team is holding up without him.

The Sharks third line saw Matt Nieto who was demoted to Worcester on Monday, Nieto made the line up and continued to play and get time as much as he did but he’s green but of course Tomas Hertl is green too but it doesn’t show. Jaromir Jagr made an interesting comment before the Devils game that Hertl’s team had a rink in the Czech Republic that was NHL size although Hertl played on international ice and he had more experience than most European players on smaller ice so that gave him a leg up and of course he’s phenomenal as well.

The Sharks fourth liners: John McCarthy has been up and down for several seasons for the Sharks. Clearly McCarthy has the coaching staff trusting him he gets a lot of short handed time but he’s one of the guys who sits when Mike Brown sits. McCarthy played center in one game last week in place of Andrew Desjardins who has sat one game and hasn’t sat any others. Their performing quite well and it’s a mix and match for the coaches on the fourth line.