The Seattle Seahawks quarterback Russell Wilson (3) on the move to throw to a receiver during Oct 11, 2020 game against the Minnesota Vikings at Centurylink Field in Seattle in first half action (AP News photo)

Its no big secret that the key for any team into stopping the Seattle Seahawks is to corral quarterback Russell Wilson.

Wilson’s uncanny ability to avoid would-be pass rushers and find an open DK Metcalf or Tyler Lockett downfield for big gains has become routine this season. You almost take him for granted because we expect him to turn a broken play into a great play.

Both Lockett (45 catches/542 yards/7 TD) and Metcalf (24 catches/519 yards/5 TD) have made huge plays for Wilson this year that has put Wilson in prime position to win his first MVP award.

Simply put, Wilson is amazing at playing quarterback in the NFL.

San Francisco’s defense will have its hands full with Wilson as the 49ers (4-3) travel to the Pacific Northwest for a pivotal NFC West matchup against the Seahawks (5-1) on Sunday afternoon from CenturyLink Field.

The last time the 49ers were in Seattle, Week 17 of last season, San Francisco prevailed 26-21 in a heart-wrenching game that was decided by a goal-line stop by then-rookie linebacker Dre Greenlaw on Seahawks tight end Jacob Hollister. Greenlaw’s tackle wrapped up the NFC West title and the No. 1 seed for San Francisco in front a loud sellout crowd.

This time around, the division isn’t on the line and there won’t be any raucous fans at CenturyLink Field due to the pandemic. But a win for the 49ers would pull them within half-game of first-place Seattle, making for a tighter race with both the Arizona Cardinals and Los Angeles Rams both at 5-2.

The same Arizona Cardinals that handed the Seahawks their first loss of the season last week, 37-34, in overtime in Phoenix on Sunday Night Football. In that game, Wilson completed 33 of 50 passes for 388 yards and three touchdowns, but tossed three costly interceptions in losing for the first time in his nine-year career when leading by four or more points at halftime.

He had been 59-0 in such situations according to the Elias Sports Bureau.

Oh yeah, that same Arizona Cardinals team that shocked the 49ers 24-20 in Week 1 at Levi’s Stadium.

You don’t think the 49ers, the reigning NFC champions, wasn’t paying attention like the rest of America when Wilson looked mortal in game for once this season?

The answer would be a resounding yes.

The unit ranks fifth in total defense this season allowing just 19.4 points per game, which includes the 43-17 home drubbing at the hands of the Miami Dolphins that left the 49ers at 2-3 and many declaring their season over.

Seattle’s offense ranks tops in the NFL in scoring, averaging 33.8 points per game. Wilson leads all quarterbacks in touchdowns (22) and passer rating (119.4) to go along with just six interceptions.

Last week, the San Francisco’s defense played without both starting safeties in Jaquiski Tartt (groin) and Jimmie Ward (quad) and limited the New England Patriots to just 241 yards of total offense in a 33-6 demolishing in an empty Gillette Stadium. The defense recorded four interceptions.

San Francisco must find a way to generate a consistent pass rush against Wilson, who is an escape artist when the pocket collapses. Tackling Wilson is harder than tackling a tadpole in shallow water.

Through seven games, the 49ers have sacked opposing quarterbacks 19 times this season, which is good for ninth in the NFL. Defensive end Kerry Hyder Jr. leads the 49ers with 3.5 sacks.

Fellow defensive end Arik Armstead has had some success at getting to Wilson in the past, registering 2.5 sacks in eight games.

Since the Seahawks drafted Wilson in the third round of the 2012 NFL Draft, he’s 12-4 against the 49ers (the most wins against any team) with 3,347 yards, 26 touchdowns and nine interceptions with a 97.9 passer rating.

With injuries to Chris Carson (mid-foot sprain), Carlos Hyde (hamstring) and Travis Homer (knee), rookie DeeJay Dallas is the only healthy running back on Seattle’s roster, so the game could be in Wilson’s hands even more come Sunday.

The last three matchups against these two rivals have come down to the final possession. So we could very well see a replay Sunday of Week 17 where Wilson has the football in his hands and San Francisco’s defense will need a stop to walk away with a victory. 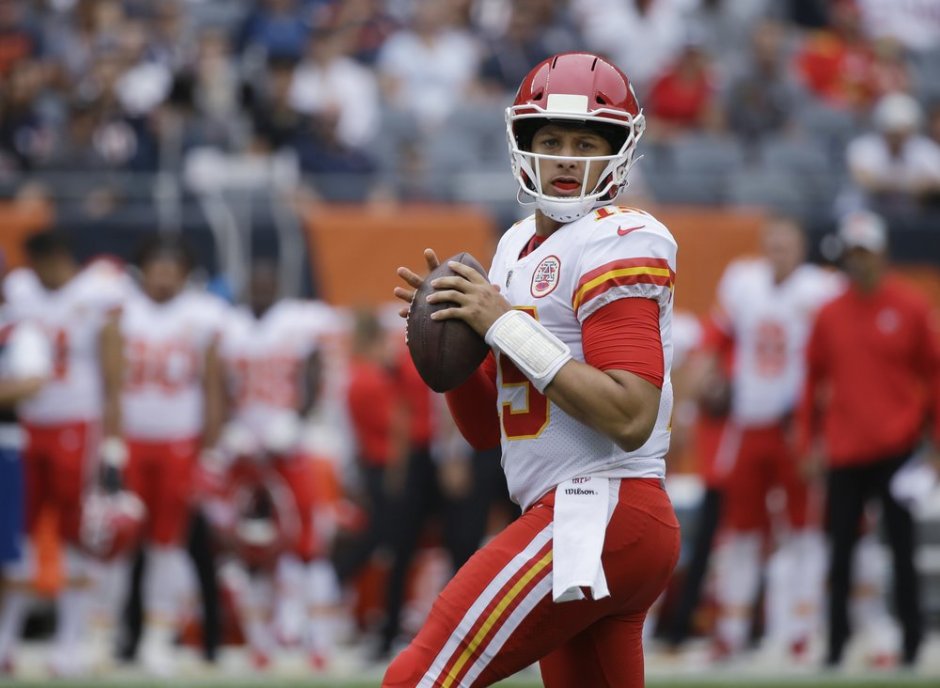 ap file photo: Kansas City Chiefs quarterback Patrick Mahomes drops back to pass in the first half of their game against the Chicago Bears on Aug 25th in pre season play. Little did Mahomes know at the time he and the Chiefs would wind up in Super Bowl LIV

SANTA CLARA–The San Francisco 49ers made winning the NFC Championship over the Green Bay Packers, 37-20, to advance to Super Bowl LIV on Sunday night look like a walk in the park. It will be San Francisco’s first trip to the Super Bowl since 2013, where they lost to the Baltimore Ravens 34-31.

For the franchise to claim its sixth Vince Lombardi trophy in seven trips to the Super Bowl, the 49ers are going to have to take down Patrick Mahomes and the Kansas City Chiefs, who are returning to the Super Bowl for the first time in 50 years after defeating the Tennessee Titans, 35-24, to capture the Lamar Hunt trophy, named after the Chiefs’ late owner as the winner of the AFC.

The Chiefs defeated the Minnesota Vikings, 23-7, in Super Bowl IV.

But neither Minnesota or Green Bay can match Kansas City’s offense, which can go nuclear within a blink of an eye with the aforementioned Mahomes as the trigger man. The third-year quarterback has a stacked offense, a track team of wide receivers in Tyreek Hill, Sammy Watkins and Mecole Hardman, and an electrifying tight end in Travis Kelce at his disposal.

In the AFC Championship Game, Kansas City found itself down 10-0 and 17-7, but Mahomes and that high-powered Chiefs offense didn’t flinch, building a 35-17 lead over the Titans thanks in large part of controlling the clock with a strong ground game. Mahomes, who finished the game throwing for 294 yards and three touchdowns, his final touchdown came on a 60-yard strike to Watkins for the Chiefs’ 28th straight point midway through the fourth quarter.

That’s the type of offensive explosion that the 49ers must avoid if they have any shot at winning this football game. That means the 49ers, who may arguably have the NFL’s best defensive line, featuring Nick Bosa, DeForest Buckner, Dee Ford and Arik Armstead must make life difficult for Mahomes every time Kansas City has the football.

The 49ers have the league’s best pass defense and ranked fifth with 48 sacks during the regular season. They have nine more this postseason, largely by taking opponents off schedule and setting up favorable pass-rush situations.

That’s huge against a quarterback that has the penchant of eluding would-be tacklers like Mahomes. Especially in a game with so much on the line like the Super Bowl. 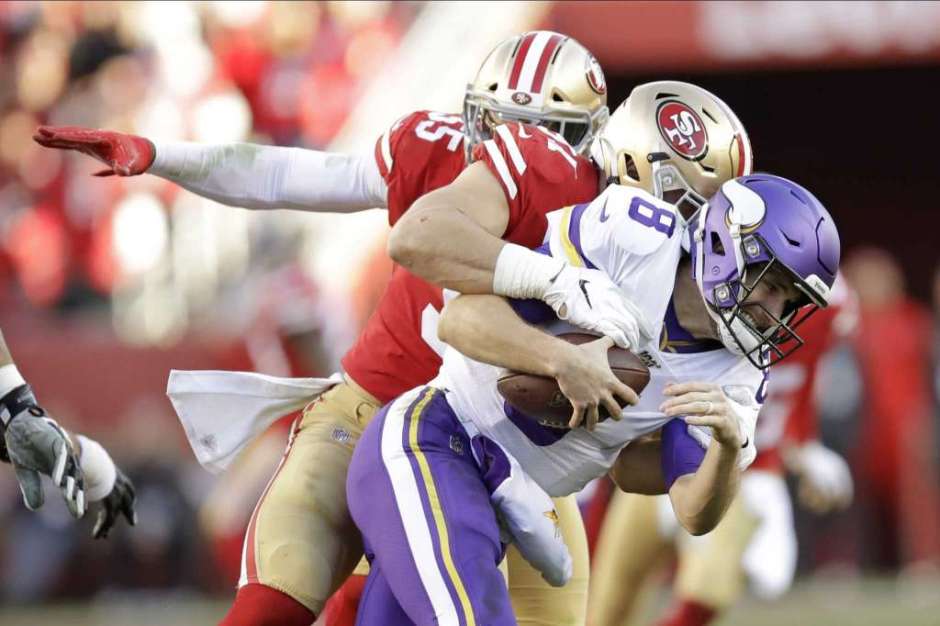 Santa Clara, Calif — In the first ever NFL playoff game at Levi’s Stadium, the 49ers defended its home field in dominating fashion, outlasting the visiting Minnesota Vikings 27-10 on Saturday afternoon in the NFC Divisional round for their first playoff win in six years.

With the win, the top-seed 49ers (14-3) advance to the NFC championship game for the 16th time in franchise history where they await the winner between Seattle and Green Bay on Sunday in the other NFC Divisional matchup.

In his first playoff start, Jimmy Garoppolo threw a 3-yard touchdown to wide receiver Kendrick Bourne for an early 7-0 lead. Garoppolo marched San Francisco 61 yards in eight plays after its defense forced Minnesota (11-7) to punt on their opening drive.

Garoppolo wasn’t spectacular, finishing 11-of-19 for 131 yards with a touchdown and an interception.

“A lot of things to clean up, but we played well enough to get the win,” tight end George Kittle said. “That’s all you can ask for. Playoff football, anyone can win and we just made more plays today.”

Kittle had just three catches for 16 yards in the contest.

As a group including Kittle, San Francisco’s pass catchers (wideouts Deebo Samuel 3 catches for team-leading 42 yards, Bourne 3 catches for 40 yards, TD; and Emmanuel Sanders 2 catches for 33 yards) combined for just 11 catches for 131 yards and a score.

Minnesota quickly responded, tying the game up at 7-7 on a 41-yard touchdown throw from quarterback Kirk Cousins to wide receiver Stefon Diggs. 49ers cornerback Ahkello Witherspoon, who had struggled in coverage down the stretch of the season, had great coverage on Diggs, but slipped at the 19-yard line and Diggs ran into the end zone.

But that would be Minnesota’s best highlight of the day as San Francisco would hold the Vikings to 147 yards of total offense. San Francisco’s offense racked up 308 yards total.

“The 49ers I felt were the better team today,” Cousins said after the game. “We didn’t do enough offensively to give ourselves a chance to win the game. It hurts now. Mike [Zimmer] said he was proud of the way the team fought this year, but right now, it’s just so raw. We’re kind of focused on this game and falling short. I thought the 49ers were a good team. They earned the number one seed and home field advantage throughout the way they played this season.”

San Francisco would retake the lead for good, behind the first of two rushing touchdowns by running back Tevin Coleman. Coleman capped off a 10-play, 53-yard drive with a 1-yard plunge to give the 49ers a 14-7 lead.

“Those guys did very well,” Coleman said of his offensive line. “They moved the guys back so I had clear holes to run through. So, yeah, they did a real good job.”

Coleman finished the game with 105 yards on 22 carries.

Following an interception by linebacker Eric Kendricks inside the 49ers’ own territory, Minnesota added a 39-yard field goal by kicker Dan Bailey to cut the lead to 14-10 at halftime.

On their first possession of the third quarter, San Francisco stretched its lead to 17-10 behind a 35-yard field goal by kicker Robbie Gould.

After Richard Sherman intercepted Cousins inside Minnesota’s territory on the Vikings’ next possession, Coleman gave the 49ers a two-score lead with his second score of the game, a 2-yard run that increased San Francisco’s lead to 24-10.

“That was the No. 1 emphasis all week,” Bosa said of the Minnesota running game. “We knew we were facing probably the best back we’ve faced all year with Dalvin, and we knew we had to earn the right to pass rush. So, that’s what we did. We took the run as serious as we could, shut it down and then we ate.”

Bosa had a great start to his playoff career, registering two of San Francisco’s six sacks on the day. The returns of defensive Dee Ford, linebacker Kwon Alexander and safety Jaquiski Tartt proved to be vital for San Francisco’s defense, that looked like its dominating self from earlier in the season.

“It was huge to have those guys back,” defensive lineman Arik Armstead said. “They’re leaders on our team, talented players, they make big plays for us. We were missing some pieces out there, but to get those guys back, we hit back on all cylinders.”

“We were playing good the whole game,” Armstead continued. “They got us early with the touchdown. We just locked in. We knew what they wanted to do which was run the ball. It starts with that, stopping the run. I think we did a good job with that. I saw they only had twenty something yards. Once we did that, we were able to get after the passer. When you do that, you can have a complete game and shut people out.”