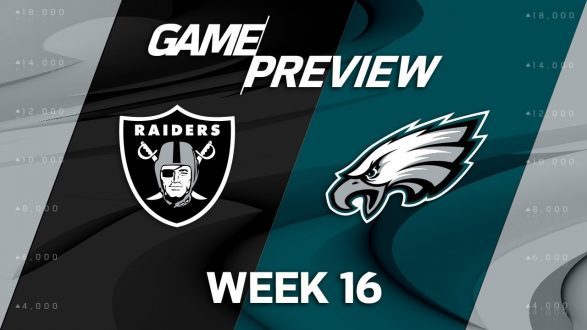 OAKLAND — Similar with the Dallas Cowboys, the Oakland Raiders gear up for another unfamiliar opponent when they travel east this week to take on the Philadelphia Eagles at Lincoln Financial Field on ESPN’s Monday Night Football on Christmas night at 5:30 p.m. PT. This is Oakland’s first appearance on MNF this year, while it’s Philadelphia’s second appearance this season.

This is Oakland’s first game in Philadelphia since 2005 and their final trip east this season. The Raiders hold a 6-5 edge over the Eagles in 11 games played all-time.

Reigning NFL Defensive Player of the Year Khalil Mack penetrated Dallas’s top-ranked offensive line for two sacks on the night. With 10.5 sacks on the season, Mack is in the top-10 in the NFL in sacks and has posted a sack in five-straight games since Week 11.

Offensively, the Raiders continued to struggle scoring points Sunday. Oakland was shut out in the first half for the fourth time this season as the Cowboys took a 10-0 lead into halftime.

Starting quarterback Derek Carr threw for just 171 yards on 21-of-38 passing and two touchdowns, both to starting wide receiver Michael Crabtree. Crabtree finished with seven catches for 39 yards to go along with his two scores. WR Seth Roberts (starting for wide receiver Amari Cooper who missed his second-straight game with a left ankle injury), led Oakland with 52 receiving yards on three catches.

On the ground, Oakland rushed for 122 yards, including 76 yards from starting running back Marshawn Lynch and 47 yards from Carr.

With their playoff chances on life support, the Raiders are facing a must-win game against the team with league’s best record in the Eagles.

Philadelphia (12-2) clinched their first playoff berth since 2013 behind second-year head coach Doug Pederson. Pederson finished 7-9 in his first season at the helm of the Eagles. In last week’s 34-29 victory over the New York Giants at MetLife Stadium, Philadelphia also secured a first-round bye in the NFC playoffs and have the inside track on the No. 1 seed.

The Eagles lead the NFL in scoring per game (31.3), second in rushing yards per game (140.5), and third in total yards per game (386.9). Before suffering a season-ending ACL injury during Philadelphia’s 43-35 victory in Los Angeles over the Rams, second-year quarterback Carson Wentz was having an MVP-type of season throwing for a franchise-record and league-leading 33 touchdowns to just seven interceptions.

With Wentz out for the remainder of the year, the Eagles turned to sixth-year pro in backup quarterback Nick Foles. In his start last week against the Giants, Foles threw for 237 yards on 24-of-38 passing and four touchdowns. The last time Foles saw the Raiders, it was in 2013 and he destroyed the Silver and Black.

Oakland’s 23rd ranked passing defense must be on high alert for an Eagles squad that have three receivers who’ve registered 700-plus receiving yards: wide receiver Alshon Jeffery (781), wide receiver Nelson Agholor (722) and tight end Zach Ertz (719). The trio have combined for 25 touchdown catches this season, with Jeffery scoring a team-best nine while Ertz and Agholor each are one behind with eight scores.

Ertz leads the team with 63 receptions.

Eighth-year running back LeGarrette Blount leads the Eagles with 717 rushing yards on 159 carries (4.5 avg) and two touchdowns in is first year with Philadelphia.

Mills has the team’s lone defensive touchdown scored this season. Defensive end Brandon Graham has a career-best 9.5 sacks this season, tied for eighth in the NFC.

Next Sunday, the Raiders will travel to Los Angeles to take on the Chargers on a short week to close out the 2017 regular season. This will mark Oakland’s first trip to the StubHub Center.