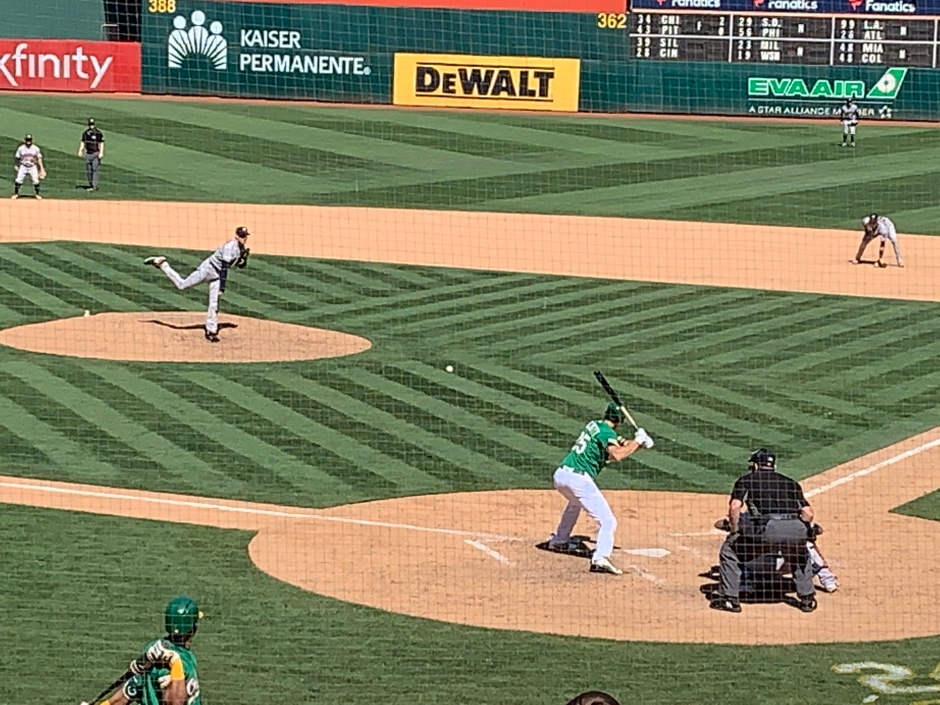 Oakland — A’s starting pitcher Chris Bassitt had to throw 31 pitches to get out of the top of the first against the Houston Astros on Saturday afternoon. That usually means two things:

Someone forgot to tell Chris Bassitt that he needed to conform to the standards of baseball on Saturday. After that rough first inning, the A’s starter pulled things together in the second inning.

Bassitt was back in hot water in the top the third inning as the Astros scored two runs on three hits. When the inning ended, there were two Houston runners on base which means the inning could have been much worse.

Bassitt’s team members really picked him up in the home half of the third inning. The Athletics put five runs up on the scoreboard to stake their pitcher to a three-run lead. The amazing part of the third inning rally was the fact that the A’s scored those runs without hitting a home run.

Bassitt pitched a scoreless fourth inning and gave up one run to Houston in the fifth inning to make it a  5-3 game in favor of Oakland. The consensus in the press box was that we had seen the last of Bassitt for the day.

The Astros sent their starting pitcher – Rogelio Armenteros – to the showers and sent Chris Denvenski to the mound to face the A’s in the bottom of the fifth inning. Oakland took advantage of a walk, hit-by-pitch, two singles, and a sacrifice fly to put three more runs up on the board. That cleared the way for Bassitt to come back out for the sixth inning.

The first hitter to face Bassitt in the sixth inning was Yuli Gurriel who singled to left field and everyone thought that was going to be all for Bassitt, but Bob Melvin left the right-hander in the game. The next batter – catcher Martin Maldonado – hit a ball on the ground to shortstop Marcus Semien who fielded it and threw to Corban Joseph at second to erase Gurriel. Joseph turned and threw to first to get Maldonado for the double play. Bassitt was able to get Jake Marisnick to pop out to Joseph at second to end the inning.

Bassitt finished his six innings throwing a career-high 116 pitches. In his postgame comments, mangers Bob Melvin said that Bassitt had told him he was ready to go to 120 pitches to get the job done. That is just plain grit and determination.

With the help of his team on offense, the A’s won the game 8-4 and the winning pitcher was Chris Bassitt who now has a record of 9-5 for the season with a 3.61 ERA.

Without trying to jinx the A’s, they will go for the four-game sweep of the Astros on Sunday 1:07 PM at the Coliseum in what should be an excellent pitching matchup. The Astros will send RHP Zack Greinke to the mound. Greinke is 12-4 on the season with a 2.91 ERA. He was a winner in his last start in Chicago versus the White Sox when he worked 6.0 innings and allowed only two runs in a Houston 6-2 victory.

The A’s will counter with LHP Brett Anderson who is 10-8 with a 3.95 ERA. This will be his 21st start of the season. Anderson was tagged with the loss in his last start on Tuesday in San Francisco against the Giants. He pitched 6.0 innings allowing two runs (earned) off six hits. He walked none and struck out four.

WASHINGTON D.C. — No one should be surprised. Power hitting is Major League Baseball’s new calling card. And the 89th All-Star Game was a portal to the game’s new, explosive look.

In a seamless coupling of the Home Run Derby and the All-Star Game, the American League prevailed, winning 8-6 as Houston Astros’ teammates Alex Bregman and George Springer homered on consecutive pitches in the 10th inning. A record 10 home runs were hit in the game, and it wasn’t until the top of the 10th that a run was scored in the game without the benefit of a home run.

To recap: 10 home runs, 25 strikeouts, nine walks. Either power up, go down swinging, or take a base and get ready for your next at-bat. Just putting the ball in play? That’s passe.

“At the beginning of the game it was like, ‘Man, is anyone going to get a hit other than a homer?’ At the end of the game, it was, ‘Are we going to get out of this mess?,'” Astros manager A.J. Hinch marveled.

Well, the American League escaped, Ross Stripling and the National League did not. The Dodgers’ Stripling was asked to pitch more than an inning, and threw 39 pitches, only the Astros’ Charlie Morton threw more (40). For Stripling, it was a recipe for disaster, stepping into a game running red-hot into extra innings, and try to navigate an AL lineup poised to drop bombs.

Stripling survived the ninth, replacing Brad Hand, and retiring the two batters he faced. The 10th was a different story. Stripling allowed home runs on consecutive pitches to Bregman, then Springer. Seattle Mariners’ Jean Segura and Boston Red Sox’s Mitch Moreland followed with base hits. After Yan Gomes struck out, his Cleveland teammate Michael Brantley delivered a sacrifice fly scoring Segura and the AL had a seemingly, insurmountable three-run lead.

But then Cincinnati Reds’ Joey Votto homered in the bottom of the inning to close the gap to 8-6. See where this is going?

“Let’s play two” is the baseball quote made famous by the late, great Ernie Banks. The problem is for most baseball fans is they really have no idea what Banks was referring to when he made that famous statement.

Sure, most baseball fans have heard about day-night doubleheaders where one game is played in the afternoon then the stadium is cleared and the second game is played several hours later as a night game. Of course separate tickets are required for each game.

On Saturday, the Astros and Athletics scheduled a “twin bill” the old fashion way. The first game started at 1:05 p.m. and the second is scheduled to start approximately 45-minutes after game one is over. And, only one ticket is required to see both games.

Daniel Gossett won game 1 of the DH with #Astros but you'd never know it. The #Athletics pitcher talked about have he needed to improve #Pro pic.twitter.com/WvTrOkrtou

The Athletics needed a strong pitching performance from their starter Daniel Gossett because the pitching staff would be taxed playing a minimum of 18 innings on Saturday. Gossett was trying to bounce back from a less than stellar start last Sunday in Seattle that lasted just 3.2-innings and resulted in Gossett recording his eighth loss of the season.

Gossett struck out four Astro hitters and gave up no runs on two hits in the first two innings. In the top of the third, Gossett issued back-to-back walks and the A’s dugout began holding their breath. Gossett then retired Bregman, Altuve and Correa to get out of the inning.

Gossett was able to come out to start the top of the seventh inning but he walked the first batter and Bob Melvin came to the mound to take him out the game. Melvin no doubt had some words of praise for his starter as well. Gossett (4-8,5.02) pitched 6.0-innings giving up just one run (earned) off five hits. He struck out seven and walked just three. The 99-pitch effort by Gossett was most definitely a “quality start”.

The Athletics also exploded for 11 runs against the Astros. Houston starter Charlie Morton (11-7, 3.86) was expected to be a real problem for the A’s hitters on Saturday. Morton gave up a double to the Athletics leadoff batter Marcus Semien in the first inning and then proceeded to record three consecutive strikeouts. It looked like it might be a long day for the A’s.

The Athletics (61-80) broke through for three runs off Morton in the second inning and never looked back in the game. The A’s put three more runs up on the board in the sixth inning and then broke the bank with a five-run eighth inning that forced the Astros to use J.D. Davis — an infielder — to close out the game on the mound.

The powerful Astros (86-55) were not able to generate anything on offense. The scored only one run off their five hits.

#Athletics skipper Bob Melvin was happy with his starting pitcher & his hitters in their 11-1 win over #Astros in game 1 of Sat DH in OAK pic.twitter.com/ctkf7d9GSM

In the batter’s box

Astros catcher Juan Centeno started the game but had to leave the contest in second inning when he took a bat off the back of the head from a hard swing by Matt Joyce. He is being evaluated for a possible concussion.