#1 Jerry the Stanford men’s next two basketball games have been canceled Dec 7 vs. Cal Poly and Wed 9th vs. Loyola Marymount and they will play at USC on Dec 13th. The Stanford women’s team will play at UNLV in Las Vegas until further notice due to the Santa Clara County Covid-19 restrictions directive.

#2 For Stanford football the Cardinal (1-2) are schedule to play in Seattle against the University of Washington Huskies (3-0) this Saturday Dec 5th and then will travel to face Oregon State (2-2) on Dec 12th. Jerry with these changes to the Cardinal home schedule do you see that effecting their play?

#3  In Stanford men’s basketball the Cardinal (1-2) in the Maui Invitational defeated Alabama to open the series but lost their last two games on Tuesday and Wednesday to North Carolina and Indiana.  Hoosiers who have a rich basketball tradition finished way ahead of the Cardinal with a 16 point win 79-63.

#4 The Cardinal men play to host Cal Poly on Mon

#5 Back to Cardinal football the Washington Huskies are on a three game win streak and are undefeated the Huskies in their last game narrowly defeated the Utah Utes 24-21. The Huskies quarterback Dylan Morris threw for 272 yards and two touchdowns. While the Stanford Cardinal won their last game against Cal by a one point 24-23 in a game the Cardinal won by blocking the Bears kicker Dario Longhetto’s extra point.

Join Jerry every Thursday for Stanford Cardinal podcasts at http://www.sportsradioservice.com

Stanford Cardinal forward Ziaire Williams (3) puts up a fade away shot while the Alabama Crimson Tide’s forward Jordan Bruner (2) leaps to attempt a block while guard Jahvon Quinerly (13) watches from behind Williams on Mon Nov 30, 2020 at Asheville NC  (rolltide.com photo)

Freshman Ziaire Williams scored 19 points and pulled down eight rebounds for Stanford on Monday, leading the Cardinal past Alabama 82-64 in the Maui Invitational men’s basketball tournament being played at Asheville, N.C.

Williams is considered one of Stanford’s highest-rated recruits in the program’s history. The 6-foot-8 forward is a McDonald’s All-American and is rated as high as a top-5 NBA lottery pick if he decides to leave Stanford after one season.

The Crimson Tide was led by Jahvon Quinerly with 14 points and 10 from Jaden Shakelford.

Stanford held a 47-31 rebounding edge. Williams and Spencer Jones each had eight boards.

The Cardinal (1-0) will meet No. 14 North Carolina (2-0) in the next round of the tournament, being played in North Carolina instead of Hawaii due to COVID-19 issues.

On the NCAA Football podcast with Michelle:

#1 The Clemson Tigers (7-0) got by the Boston College Eagles (4-3) 34-28 on Saturday. The Tigers rallied in the fourth quarter with a touchdown and conversion for all the scoring the quarter good for the win.

#2 The Alabama Crimson Tide (5-0) obviously doesn’t believe in the mercy rule crushed Mississippi State (1-4) 41-0. The Crimson Tide offense ran through Miss State’s defense all night long with the Tide ending the first half with a 27-0 score and getting the huge shutout win in the end.

#3 The Ohio State Buckeyes (2-0) picked up their second win of the second win this week beating the Penn State Nittany Lions (1-1) 38-25. Buckeyes quarterback Justin Fields threw for 147 yards, two touchdowns, and no interceptions.

Join Michelle each Sunday night for the NCAA podcast at http://www.sportsradioservice.com

On the NCAA Football podcast with Michelle Richardson:

#2 Michelle, Auburn (1-2) got shocked with a 30-22 loss to South Carolina (1-2). South Carolina scored big in the second and third quarters which helped carry them to victory. Gamecocks quarterback Colin Hill was 15-24 for 144 yards and one touchdown and one interception.

Join Michelle every Sunday night for a look at NCAA Football at http://www.sportsradioservice.com 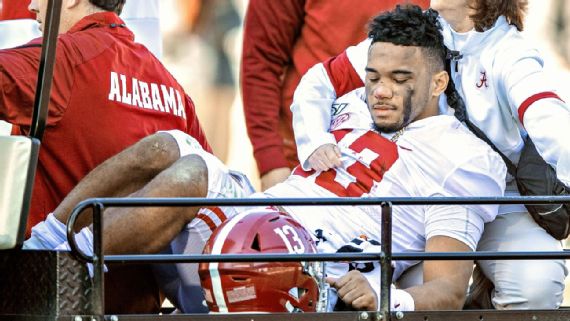 espn photo: Alabama Crimson Tide quarterback Tua Tagovailoa is carted off the field after getting a dislocated hip and a bloody nose. Tagovailoa will be out for the rest of the season.

#1 The Alabama Crimson Tide’s Tua Tagovailoa will be out for the rest of the season due to a dislocated hip and he got a bloody nose in the Tide’s game with Mississippi State. Alabama won it 38-7. What will the loss of Tagovailoa mean for the Crimson Tide?

#2 Penn State picked a big win over the Indiana Hoosiers on Saturday with a 34-27 win. The Nittany Lions quarterback Sean Clifford threw for 178 yards, 11-23 and one touchdown.

#3 Michigan improved to 8-2 with a 44-10 win over Michigan State and the Wolverines quarterback Sean Patterson threw for 384 yards, 24-33, and four touchdowns.

Michelle Richardson does the NCAAF podcast each Sunday at http://www.sportsradioservice.com 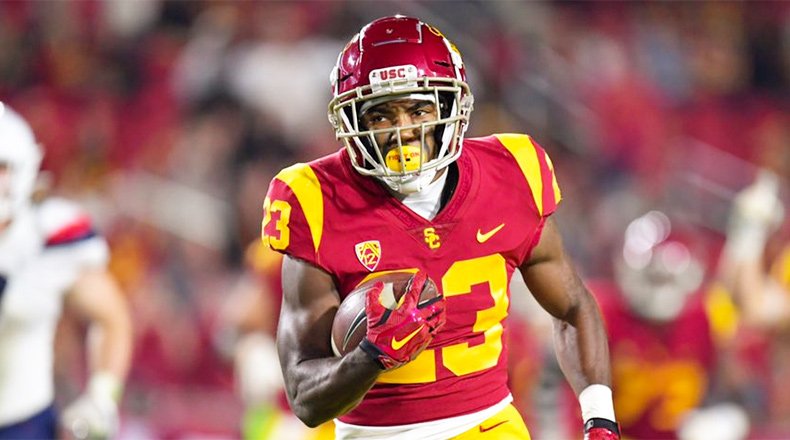 #1 The USC Trojans (5-3) just got by on Friday night against the Colorado Buffaloes (3-5) 35-31 win. With the Buffaloes leading by ten, 31-21, the Trojans stormed back with two touchdowns in the fourth quarter for the 35-31 win in Boulder, Colorado.

#2 In West Division of FBS, SMU (8-0) remained undefeated on Friday night with a road win over the University of Houston (3-5) 34-31. SMU quarterback Shane Buechele threw for 203 yards, two touchdowns and one interception for the win.

#3 To the big game of the week, it’s the Arkansas Razorbacks (2-6) against the Alabama Crimson Tide (8-0). Crimson quarterback Tua Tagovailoa is having himself a season. So far, 2166 yards and 27 touchdowns. No doubt a very hard act to follow. Crimson Tide comes a way with a crushing win 48-7.

Michelle does the NCAAF podcast each Sunday night at http://www.sportsradioservice.com