The Las Vegas Aces have a new head coach.

Hammon was with the Spurs as a coach since 2014, but will now be a head coach for the first time.

“I am so excited to return to the WNBA and grateful for Mark Davis and Nikki Fargas having a vision for me to lead the Aces,” said Hammon. “This is where I come from, and I wouldn’t be me without the W. I’m thrilled to be able to give back and lead this next group of women.”

Hammon will replace Bill Laimbeer, who was the Aces head coach from 2018 through 2021.  Laimbeer will remain within the organization to help build the 2022 roster.

“This is the best possible scenario for the Las Vegas Aces,” said Laimbeer. “It takes a tremendous amount of energy to be a head coach. In Becky, the team now has somebody who can serve in that role for the long term, which is great for both the players and the franchise.”

Hammon played for both the New York Liberty and the San Antonio Stars in the WNBA.

The Aces season came to an end in an 87-84 loss to the Phoenix Mercury at Michelob Ultra Arena in Las Vegas.

“We got down and clawed back and didn’t give up,” said Mercury center Brittney Griner. “Super proud of the team.  We got the win.”

The Mercury won the best of five game series over the Aces three games to two.

Las Vegas led 66-58 after three quarters, but Phoenix outscored the Aces 29-18 in the fourth quarter to advance to the WNBA Finals.

“Someone has to lose and we did,” said head coach Bill Laimbeer. “We didn’t make the plays that we needed to in the fourth quarter and they did.”

Down two points with less than one second left, Griner blocked A’ja Wilson’s layout to seal the win.

“She [Griner] has been amazing all year,” said Phoenix guard Skylar Diggins-Smith. “She is a superstar.”

“A’ja was our second option,” said Laimbeer. “She had a good move, but Griner got a hand on it.”

Wilson took the loss hard, falling to the ground at the end of the game in tears.

Laimbeer stressed that Phoenix emerged victorious in the game because of the leadership from guard Diana Taurasi and Griner.

“This team [Aces] has lacked leadership throughout the season,” said Laimbeer.  “It’s a good learning experience for us.”

Kelsey Plum and Chelsea Gray led the Aces with 22 points, while Wilson added 21 points and 10 rebounds.

“I’m just proud to be a part of the Las Vegas Aces,” said Plum. “We were so close, that’s why it hurts.  We will be back, I have no doubt in my mind and the result will be different.”

“We played together as much as possible, but it didn’t go our way tonight,” said Gray.

The Aces head into the offseason with a list of unrestricted free agents including Liz Cambage, Riquna Williams, Angel McCoughtry and Kiah Stokes.

The Aces blew the game open in the third quarter, going on a 24-0 run to take game four of the WNBA Semifinals, 93-76, over the Mercury in Phoenix.

“We played a solid basketball game,” said head coach Bill Laimbeer. “The whole package is who we are.”

With the win, the Aces and Mercury will play a deciding game five on Friday in Las Vegas.  Winner advances to the WNBA Finals against the Chicago Sky.

The Aces were led by guard Chelsea Gray with 22 points, while guard Kelsey Plum came off the bench to score 20.

“We had great energy and just a different change in attitude,” said Plum. “Getting beat the last two games was humbling.”

The Aces will attempt to advance to the WNBA Finals for the second straight season.

The Aces shot just 30.9% from the field in an 87-60 loss to the Mercury in Phoenix in game three of the WNBA Semifinals.

“We just didn’t have it offensively today,” said head coach Bill Laimbeer. “Shooting 30% isn’t going to win games. We missed a lot of shots that we normally make.”

Cambage led the Aces with 13 points, while Dearica Hamby added 10.

“A’ja didn’t get on track today and neither did [Kelsey] Plum,” said Laimbeer.

The Mercury dominated the Aces on the boards, pulling down 58 rebounds, to Las Vegas’ 29.

“When you miss a lot of shots like we did, the defensive team is going to get a lot of rebounds,” said Laimbeer.

Brianna Turner led the Mercury with 23 points while pulling down 17 rebounds.

The Mercury now lead the best of five series two games to one heading into game four on Wednesday in Phoenix.

“We need to go back to playing our game,” said guard Jackie Young.

– The Mercury shot 44.3% from the field.
– Only two Aces players scored in double figures.
– The Aces went just 2 for 14 from three-point range.

The Phoenix Mercury stole home court advantage with a 117-91 blowout of the Las Vegas Aces at the Michelob Ultra Arena.

“Effort, we didn’t have it tonight,” said head coach Bill Laimbeer. “They played harder because they wanted it more than us.”

Laimbeer wasn’t happy with his team’s performance, but also was unhappy with the referees.

“Getting a little tired of the referees and how we’re being refereed,” said Laimbeer.

Kelsey Plum led the Aces with 25 points off the bench, going 10 for 17 from the field including 3 for 8 from three-point range.

The Aces had six players score in double digits, while shooting 52.2% from the field.

Phoenix started the game fast, building a 17-point lead in the first quarter.  The Mercury controlled the game after that.

The Aces and the Mercury are now tied 1-1 in the best of five game series.

The Aces will travel to Phoenix to play game three of the WNBA semifinals on Sunday. 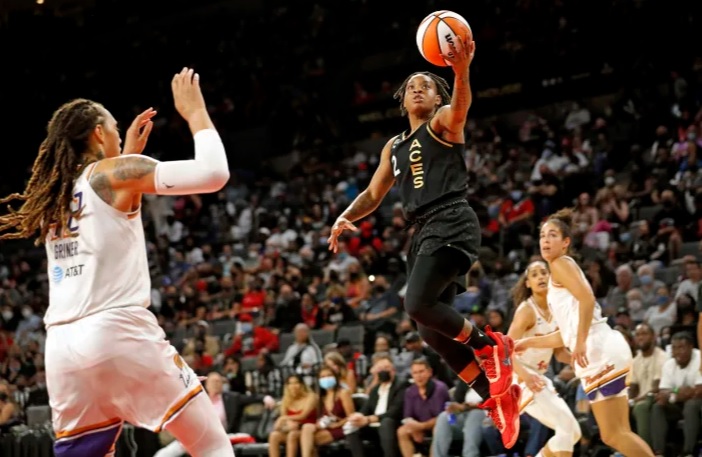 The Aces came off eight days rest and took game one of the WNBA semifinals in a 96-90 win over the Phoenix Mercury at the Michelob Ultra Arena.

“They [Aces] came focused today,” said head coach Bill Laimbeer. “If we can maintain the consistency in this series, it’s our game.”

Riquna Williams led the Aces with 26 points, while Kelsey Plum came off the bench and added 25.

“I took advantage of anything that they gave me and didn’t overthink,” said Williams on her career night.

“We bring consistency and energy off the bench,” said Plum. “We don’t care about the numbers. We care about how we can uplift our team.”

“We [the Aces guards] were just taking what the defense gave us,” said Gray.

With the win, the Aces jump out to a 1-0 lead in the best of five semifinals series against the Mercury.

The Mercury made it to this series by beating the New York Liberty, 83-82, in the first round and by knocking off the Seattle Storm, 85-80, in the second round.

The Aces got a late bucket from Jackie Young to beat the Mercury in Phoenix, 84-83.

Young grabbed a rebound off a Kelsey Plum miss and put it back with just 4.3 seconds left in the game to secure the win for Las Vegas.

Young finished the game with 10 points, while Plum came off the bench and scored a game high 23 points.

Liz Cambage played 9:31 and had four points with four rebounds after coming out of the health and safety protocol.

With the win, the Aces finished the regular season 24-8 and secured the double bye by finishing in second place in the standings.

The WNBA playoffs will begin on Thursday, September 23rd.

– The Aces shot 46.4% from the field.
– Each team pulled down 33 rebounds.
– Ten Aces players saw substantial minutes in a game that didn’t matter in the standings.

“Tonight was one of our better games,” said head coach Bill Laimbeer. “We will take the win.”

With the win, the Aces secured the second seed going into the playoffs and a double bye.

“We haven’t done anything yet,” said Laimbeer. “We were expected to get the double bye.”

“Defense wins games,” said Williams on the Aces defense. “We need to just lock up and defend.”

A’ja Wilson recorded a double-double, scoring 14 points and pulling down 10 rebounds, while Kelsey Plum came off the bench and dropped 20.

“I was just trying to play free and be myself,” said Plum. “We knew that we had to bring up the intensity level.”

The Aces improved to 23-8 on the season heading into their final game of the regular season on Sunday in Phoenix against the Mercury. 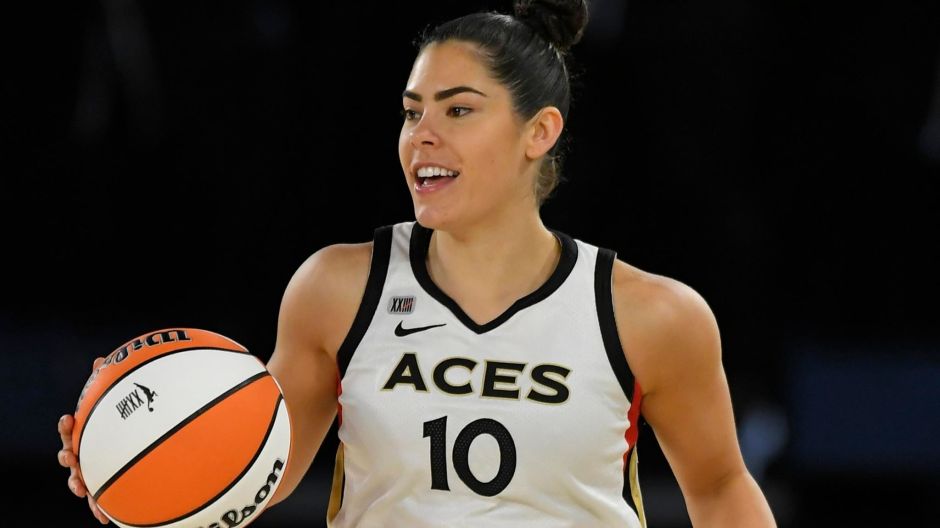 Trailing by 12 at halftime, the Aces rallied in the second half to beat the Dallas Wings, 85-75, at ULTRA Arena.

Las Vegas took over in the third quarter, scoring 20 of the final 26 points in the quarter.

Kelsey Plum led the Aces with 30 points coming off the bench, going 5 for 7 from three-point range.

With the win, the Aces improved to 22-8 on the season and sit two games behind the Connecticut Sun for first place.  Las Vegas is two games ahead of third place Minnesota with just two games remaining in the regular season.

The Aces will next play the Sky on Friday in Chicago. 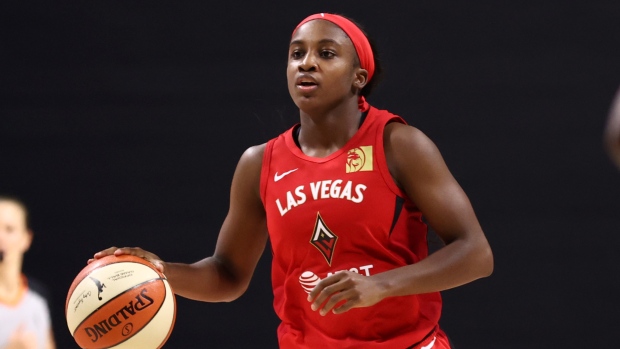