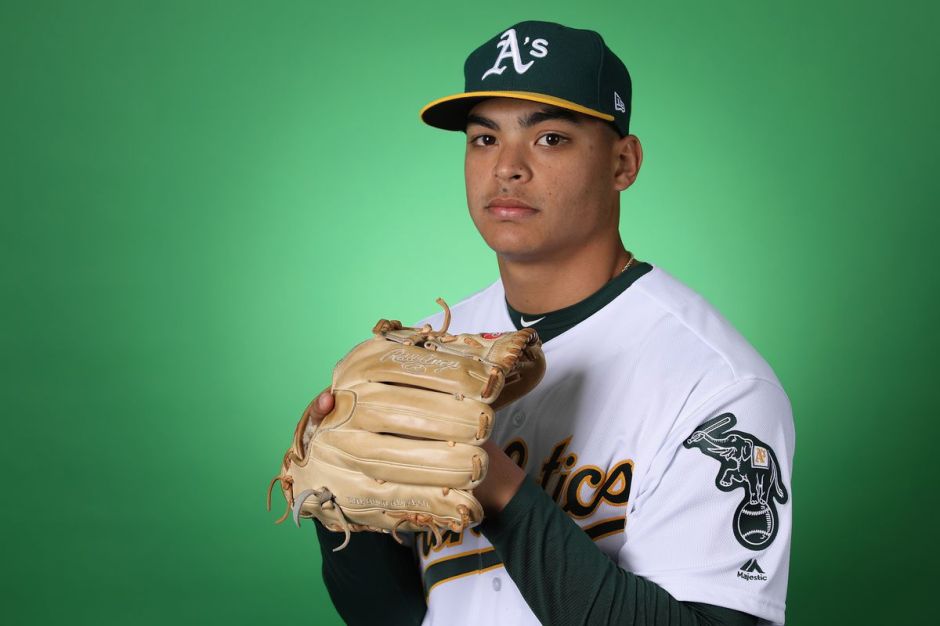 OAKLAND–The Dodgers traded for Mookie Betts, the Yankees signed free agent Gerrit Cole, who is anything but free, and the Twins struck late, adding Josh Donaldson to their collection of sluggers.

The A’s didn’t sign any big names, or little ones for that matter. But that doesn’t mean they stood put. A.J. Puk, Jesus Luzardo and Sean Murphy–each among the Top 60 prospects in all of baseball–are being counted on to be big league contributors starting on Opening Night July 24.

Luzardo, the A’s No. 1 prospect, has been cleared to resume workouts after testing positive for COVID-19, the timing of which threatened his availability for the opener. But while preparing to be cleared, Luzardo lobbied the coaching staff, and did whatever he could physically to gain preparedness.

“I figured out ways to get little lifts in my room while listening to my body,” Luzardo said. “If I was feeling good that day, I’d get after it. If I was a little tired, I took it lighter. I definitely tried to stay in shape.”

Originally tabbed as a starter, Luzardo could start the season in the bullpen, where he would remain ideally until he regains a starter’s stamina. Puk seems set as the fourth starter with Murphy assuming the starting catcher’s role after a successful, 20-game audition in 2019.

Puk, Luzardo and Murphy all saw time at the big league level last season, and given their performances, expectations are high that all three can excel and kiss the minor leagues farewell.

Murphy was a third round selection in the 2016 Draft and he’s moved quickly through the organization’s minor league structure,  compiling 90 extra-base hits in 235 games over four seasons. The 24-year old impressed manager Bob Melvin with his attention to detail in handling the pitching staff, so much so he was picked to start the AL Wild Card Game against the Rays. Murphy’s had issues with knee injuries so the shortened 60-game schedule may prove ideal for his adjustment to the majors.

The 24-year old hasn’t experienced any setbacks in either spring or summer training, giving him jump on veterans Daniel Mengden and Chris Bassitt for a spot in the starting rotation. No official announcements have been made but Puk appears on track to get a start against the Angels opening weekend.

Luzardo was acquired in the 2017 trade that sent Sean Doolittle and Ryan Madson to Washington. His profile as a polished performer has the A’s brass excited to see more after the 22-year old made just six appearances at the big league level in 2019 while battling injuries. In 43 minor league starts, Luzardo won 14 times compiling a 2.53 ERA. He also appeared in the 2019 Wild Card Game, throwing three innings, allowing just one hit, all while the A’s failed to rally from a five-run deficit.

The Oakland A’s got back into the win column on Tuesday night as they downed the Kansas City Royals 2-1 at the Coliseum. The A’s were down 1-0 going into the bottom of the seventh inning when they bit back at the upstart Royals.

Matt Olson hit a 450-foot home run into the center-field stands off a 2-1 pitch from the Royals starting pitcher Jorge Lopez. Lopez then had the most logical response to Olson’s home run — he hit Mark Canha with a pitch. No, Canha was not pleased.

With Canha at first, Seth Brown doubled to left-center field and drove Canha home to score what would prove to be the winning run of the game. Brown, who has been “clutch” for Oakland since being called up to the majors, made Lopez pay for his stupidity of hitting the next batter after Olson hit his home run. Lopez should have been ejected from the contest.

Spotlight on the Royals

The Royals and A’s meet in a getaway day game tomorrow that will get underway at 12:37 PM PDT. The Royals will send LHP Danny Duffy to the mound. He has a 6-6 record on the season with a 4.55 ERA. He had a no-decision in his last start in Houston.

The A’s will start RHP Homer Bailey, who they obtained from the Royals, on Wednesday afternoon. Bailey is 13-8 on the year with a 4.76 ERA. He won his last start versus the Astros in Houston.

On Headline Sports with Tony Renteria:

#1 The San Francisco Giants had a second meeting with free agent superstar Bryce Harper. Does that look like an indication that Harper likes what the Giants organization is all about and what they have to offer?

#2 Former Cleveland Browns quarterback Johnny Manziel was released by the CFL’s Montreal Alouettes for violations of his contract. The Alouettes further informed the other eight teams in the CFL of Manziel’s release. The Alouettes did not give a reason why he was being released. But sources say Manziel violated his confidentiality agreement. It was reported that the CFL ordered his release.

#3 The Golden State Warriors have lost three of their last four games and have showed signs of tiring. They trailed the Miami Heat in Wednesday night’s game and talk has it that besides Kevin Durant who could go shopping after this season Draymond Green could announce for free agency after next season as well.

#4 The Sacramento Kings are coming off a tough loss to the Minnesota Timberwolves on Monday night and hosted the Milwaukee Bucks Wednesday night and lost 141-140. The Kings–even when they lose–still make it interesting right until the end of the game.

#5 How concerned should the Oakland A’s be about their starting rotation now that pitchers Jharel Cotton and A.J. Puk are returning from surgery from last season? Can the A’s rotation stay healthy this season?

Join Tony each Thursday for Headline Sports at http://www.sportsradioservice.com

The Oakland Athletics have announced the non-roster players who have been invited to the 2017 Major League Spring Training Camp. Most of these players will not make the 25-man Major League roster, but they will gain valuable experience playing with and against Major League talent. These players will also have the benefit of working with the major league coaching staff.

These non-roster players will also be watched very closely by the player development staff to determine when they might be ready to play in the Major Leagues.

These are the 26 players who have been invited to the A’s Spring Training Camp in mid-February 2017: 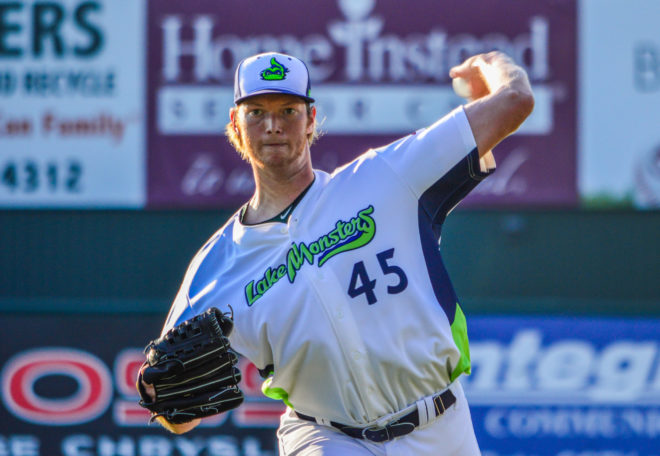 Every team in baseball wants a tall, strong, left-handed pitcher that can throw hard and be the number one man in the rotation. The Oakland Athletics may have found that player in the 2016 MLB Draft.

With their number one pick (sixth overall), the A’s selected A.J. Puk – a 6-foot-7, 220 pound, left-handed pitcher out of the University of Florida. Richie Martin – Puk’s teammate at Florida – was the A’s number one draft pick in 2015. Martin is currently playing shortstop for the Stockton Ports of the California League.

The A’s 2016 second-round pick (47th overall) – right-handed pitcher Logan Shore – was also a teammate of Puk at Florida and the two are currently are teammates at short-season Class A Vermont.

Puk was considered to be a possible number one overall selection before the actual draft. Some inconsistency on the mound during his junior year along with some problems with back spasms caused him to drop down in the draft. Those problems did not deter the Athletics who did not hesitate to take Puk with the number six pick.

The fastball is Puk’s best pitch. It is rated well above above average and he throws it 96-97 mph regularly. He also has a plus slider that he delivers at 88-90 mph. Some within the A’s organization have referred to his slider as disappearing much like the slider thrown by Dave Righetti in his Yankee days – which is high praise. Puk is also rated high because he can maintain his velocity deep into games.

Puk’s third pitch is the change-up and it is still in the development stage. Scouts feel it should be major league ready soon. His control and consistency also needs improvement but that is why he is in the minor leagues. Given the chance to develop, Puk should become an impact starter for the Athletics.

Puk is currently pitching for the Vermont Lake Monsters of the short-season Class A New York-Penn League. He has a record of 0-2 in seven starts with an ERA of 2.70. In 20.0 innings pitched, Puk has given up 11 runs (6 earned) off 13 hits. He has walked six and struck out 27 batters. The big left-hander has a batting average against of .171 and a WHIP of just 0.95.

In his last start, Puk worked 3.2 innings. He gave up no runs on just one hit. Puk walked two and struck out eight batters. The only downside he had in the game was his high pitch count of 67 (43 strikes) which is probably why he was pulled from the game.

The current estimate is that fans could see Puk in a green and gold uniform sometime in the 2018 season which would mean he would progress through the farm system very quickly.