On the NHL Stanley Cup Qualifiers with Marko Ukalovic:

#1 The Nashville Predators got a two goal win over the Arizona Coyotes 4-2 to tie the series 1-1, the Preds got scoring help from Nick Bonino, Ryan Johansen, Calle Jankrok, and Viktor Arvidsson.

#2  Will the Coyotes goaltending situation after Antti Raanta left the bench during the game impair them for a backup after Raanta was ruled “unfit to play” and was replaced by third string goalie Adin Hill.

#3 During warm ups on Tuesday before the game it was reported that Raanta was struck in the facemask by a puck. Raanta has had a concussion in the past but Coyotes removed him and didn’t disclose the reason why.

#4 The Calgary Flames have taken the series lead over the Winnipeg Jets 2-1, the Flames  scored three times on the power play and that opened a wide margin for the 6-2 win. Both teams face off again on Thursday.

#5  The Flames Sean Monahan had a goal and two assists while  Elias Lindholm, Johnny Gaudreau, and Mikael Backlund each scored a goal. Talk about the Flames offensive nucleus going into Thursday’s game against the Jets.

On the NHL podcast with Marko:

#3 The Boston Bruins goaltender Tuukka Rask fractured a finger, Rask said he was doing box jumps and bent his finger at the edge of the box but Rask said it was nothing major and he should be ready to go when the qualifiers begin.

#5 After missing 55 games due to suffering from concussion issues it looks as if the Vancouver Canucks forward Michael Ferland will be back in the line up for the qualifiers. Ferland said after the Tuesday morning skate he felt pretty good and he’s looking forward to the scrimmage on Tuesday night.

Join Marko each Wednesday for an edition of the NHL podcast at http://www.sportsradioservice.com

Corey Crawford in goal for the Chicago Blackhawks has not been in camp and is listed “unfit to play” Crawford has had a bout with two concussions over the last two seasons. (AP Photo)

On Headlines podcast with Marko:

#1 Chicago Blackhawks goaltender Corey Crawford is has been ruled “unfit to play” Crawford had suffered two concussions and had missed 80 games over the last two seasons.

#2 Crawford had split the goalie duties with Robin Lehner, Lehner was traded to the Vegas Golden Knights on Feb 24th. Crawford did play in the last eight games before the season was suspended on March 12th.

#5 Safety protocols and lots of precautions set up as the NHL season will start up on August 1st in the two Canadian bubbles Toronto and Edmonton. The circumstances are different as the players have to use all sorts of precautions to stay safe but frankly this is a physical game which calls for checking and contact do you see a lot of that being taken out of the game.

#1 NHL players will be voting this week on starting the NHL Stanley Cup Playoffs in the new CBA. Nothing is official yet on the two bubble cities Edmonton and Toronto but a vote is coming soon.

#2 Both sides are working out a Memorandum of Understanding know in the union-management trade that all rules and binding agreements are in place. Both sides are hoping to iron out a six year agreement. Both sides are looking to start the post season August 1st.

#3 One of the biggest concerns in the contract language is safety in procedures on how NHL personnel and the players will stay at local hotels and go straight to the rink and back everyday and how safety procedures will in place.

Marko does Headline Sports each Wednesday night at http://www.sportsradioservice.com

On Headlines Part 2 with Marko:

#1 Marko talk about the Philadelphia Flyers Scott Laugton who just won 2019-20 Yanick Dupre Class Guy Award. The award goes to the player that shows class on and off the ice and the Philadelphia chapter of the Professional Hockey Association voted Laughton for the award.

#2  Detroit Red Wings general manager Steve Yzerman challenged his players during this layoff to “figure it out” as the Wings will not be in Toronto for the post season. Yzerman wants to get his players fired up and motivated for next season.

Join Marko for Headline Sports each Wednesday at http://www.sportsradioservice.com

#1 For the NHL Cup Qualifier Quinn Hughes of the Vancouver Canucks says he’s back and he’s a strong as he’s ever been. Hughes whose working out at Rogers Centre said that the four months off has been a blessing.

#2 Hughes also mentioned with that time off this is the best he’s ever felt compared to 3 1/2 months ago.

#4 The players are now waiting for the NHL to move into phase three and four in the Return to Play plan. The hope is to get camps going by July 10th the start date and the Eastern and Western Conferences have 24 teams going if everything goes without a hitch it could bet pretty entertaining out there.

#5 Marko how important is it Colorado Avalanche’s right winger  Mikko Rantanen makes a come back from an upper body injury he sustained Feb 17 after getting tripped by the Tampa Bay Lightning’s defenceman Erik Cernak .

Join Marko each week for Headline Sports every Wednesday at http://www.sportsradioservice.com 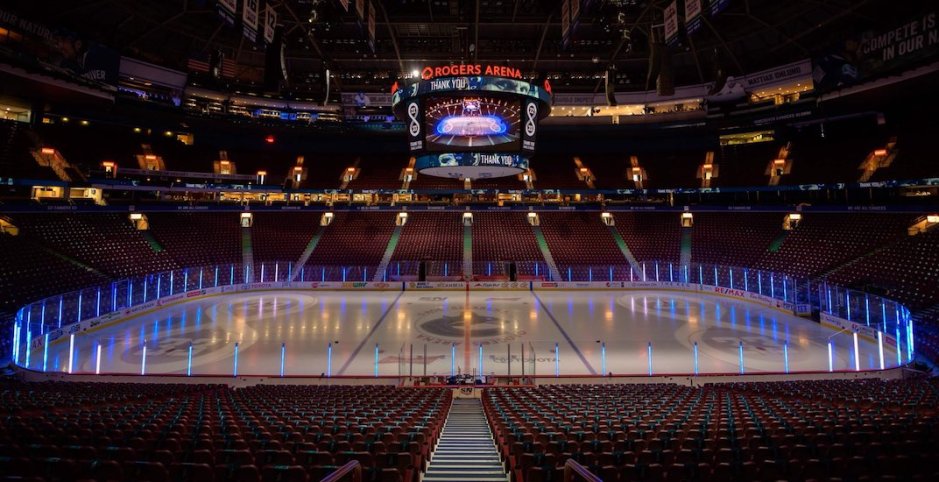 Vancouver’s Roger’s Center stands by as a hopeful out of six cities in the running for a shot at being a hub city for the Stanley Cup Playoffs (dailyhive.com file photo)

#1 The NHL has found that 11 more players who have tested positive for Covid-19. While the NHL was opening practice facilities, as the players were coming back so were the test results.

#2 Seeing that 11 players came up positive how much further could this push back the NHL schedule?

#3 The NHL is down to just seven cities to chose from as playoff hubs from the original ten. Pittsburgh, Columbus, and Dallas were eliminated leaving Chicago, Edmonton, Las Vegas, Los Angeles, Minneapolis, Toronto and Vancouver. It was reported that Vancouver and Las Vegas were selected but the NHL denied such rumors.

#4 The NHL is very happy that the Canadian government has waived the 14 day quarantine requirement and will allow teams to come and go for the playoffs. The three cities in the running as a hub city Edmonton, Vancouver and Toronto.

#5 Fans and media have been commenting about the practicality of opening the camps followed by the playoffs saying because of the rapid rise in Corona cases it would be best to try and start pre season followed by the regular season in September and October.

Armando L. Sanchez / Chicago Tribune/Chicago Tribune/TNS Blackhawks center Jonathan Toews observes the action during the first period against the Blues at the United Center on Mon Dec 2, 2019. Chicago Mayor Lori Lightfoot is hoping to be a hub city host for the NHL Stanley Cup Playoffs at Chicago’s United Center.

#1 Marko Canadian Prime Minister Justin Trudeau said that he would welcome the NHL Stanley Cup Playoffs in Canada. Canada has had an imposed travel ban with 14 day quarantine that will be imposed until at least July 20th. The three cities in Canada who are interested in hosting the playoffs are Edomonton, Toronto,or Vancouver.

#2 Ten cities in all are vying to host the playoffs including the following US cities, Columbus, Dallas, Los Angeles, Las Vegas, Minneapolis, Pittsburgh, and Chicago. This week in an interview with Chicago Mayor Lori Lightfoot, Lightfoot said she is extending the invitation that Chicago would like to host the NHL playoffs saying Chicago is a “hockeytwown. ”

#3 Marko realistically speaking safety is a huge concern for everyone in hockey from the players to the folks who clean the arenas each night after the games we’ve asked all along wouldn’t it be safe if hockey waited until a vaccine was found rather than start and have to stop again because someone tested positive?

#4 The Washington Capitals Alex Ovechkin seems to be optimistic that players can shake off that old pandemic rust off from the shutdown and get to regulation NHL speed how much time do you think it will take for the players to get ready?

#5 Marko, the Buffalo Sabers fired their GM Jason Botterill although Botterill will take credit for the Brandon Montour signing. The overall picture for the Sabers is not too good they struggled before March’s shutdown and the Sabers have hired Kevyn Adams. Adams served as the vice president of business operations and played ten years in the NHL.

Join Marko for Headline Sports each Wednesday at http://www.sportsradioservice.com 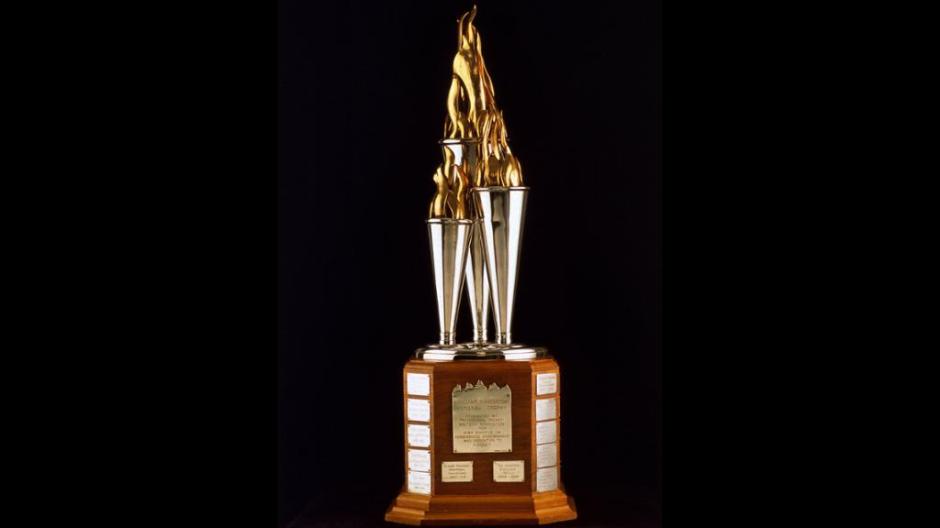 The NHL Masterton Trophy is between three NHL candidates who will be the winner? Marko has that answer in today’s podcast (nhl.com photo)

#1 The NHL Masterton Trophy candidates are from the Philadelphia Flyers Oskar Lindblom, St Louis Blues Jay Blouwmeester, and the Ottawa Senators Bobby Ryan. The award is given to the player that demonstrates, qualities of perseverance, sportsmanship and dedication.

#2 The Toronto Maple Leafs during morning skates this week wanted to make sure they have their phase 2 qualifier faces on. Center John Taveras makes no bones about it this is serious business saying they want to take advantage and get the cob webs out.

#3 The San Jose Sharks Evander Kane and former NHL player Akim Aliu are heading up the NHL’s Hockey Diversity Alliance. There are six current and former NHL players involved including the Sharks former skater Joel Ward. The Alliance is independent of the NHL but Kim Davis who is the NHL’s Sr. Vice President said that she is hopeful the NHL and the Alliance can both work together.

#4 Bob Murray the general manager for the Anaheim Ducks said that he left Ducks head coach Dallas Eakins without any support last season. Murray said that when he hired Eakins to replace former head coach Randy Carlyle he wanted to give Murray some space and some distance to run the club. The Ducks finished the season at 29-33-9 and failed to make the Stanley Cup Playoffs for their second straight season and finished 13th in the Western Conference.

#5  Arizona Coyotes owner Alex Meruelo said that he will be making a decision on where the Coyotes will be playing hockey in the next two seasons from now. Meruelo has had his eye on the East Valley the Phoenix Metropolitan area. The City of Glendale where the Coyotes play now wants to talk to Meruelo about keeping the club in Glendale at the current building at Gila River Arena.

Join Marko each Wednesday for Headline Sports podcasts at http://www.sportsradioservice.com

#1 The NHL is entering phase two to start the 2019-20 post season as the discussion turns to the steps on opening up the training facilities for workouts.

#3 It was reported that June is the target for the “return to play process” according to a 26 page NHL document worked out between the NHL and the NHLPA.

#4 The document also stated that the players will not be mandated to come back and that those who chose to return do it on a voluntary basis to travel to their club cities.

Marko does Headline Sports each Wednesday at http://www.sportsradioservice.com