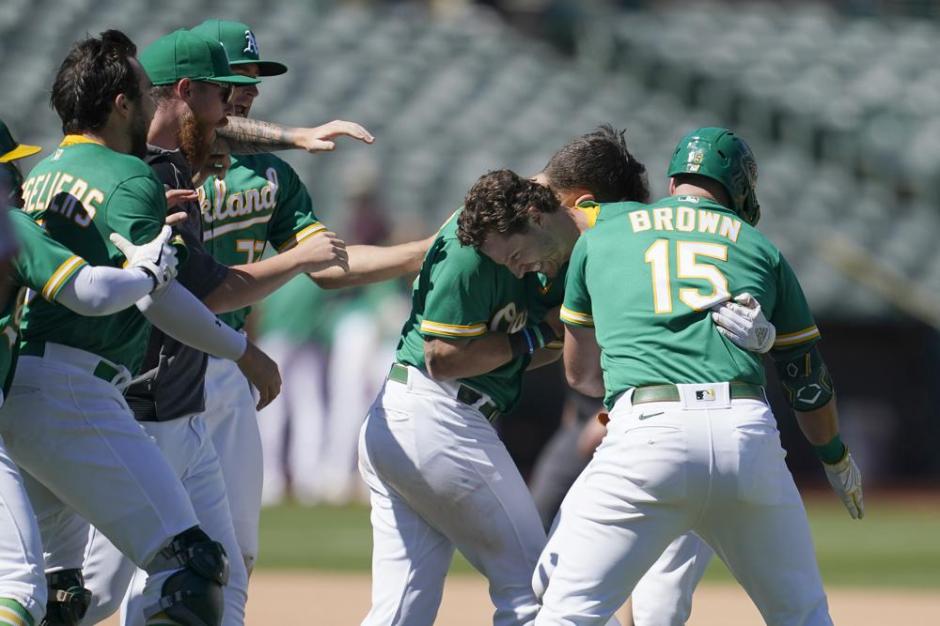 OAKLAND–The Oakland A’s won the finale of the three-game series with the Miami Marlins 3-2 on Wednesday afternoon at the Oakland Coliseum. It was a beautiful afternoon in Oakland. The temperature at the start of the game was 71 degrees, and there was not a cloud in the sky.

The game was an old-fashioned pitcher’s duel between lefty Cole Irvin for Oakland and lefty Jesus Luzardo for Oakland. Irvin had one of his better outings as he went seven innings, allowed two hits, and had no runs. Irvin struck out a career-high eleven batters and did not issue a walk.

The A’s were ahead 2-0 when Irvin left the game and was in line for his seventh win. Unfortunately for Irvin, Oakland’s bullpen gave up a run in the eighth and one in the ninth to tie the game.

Miami’s starter, Jesus Luzardo, was dominant for the game’s first five innings. He did not allow a hit and walked just one hitter. The former A’s hurler looked like he was on his way to a win. The A’s had other thoughts as they broke through the spell and put two runs on the board in the bottom of the sixth.

Berti nailed Bride on the throw to the catcher. Luzardo walked Sean murphy to load the bases. Chad Pinder singled to drive in Allen and Langeliers. The A’s led 2-0 after six complete

A’s manager Mark Kotsay brought in Zach Jackson to pitch the eighth. Jackson hit Joey Wendle with a pitch. Peyton Burdick reached on a fielder’s choice. Wendle was out at second. Jackson struck out JJ Bleday for the second out. Burdick was thrown out at second attempting to steal.

The Marlins challenged the call. The play was overturned after a review. Jon Berti walked. Miguel Rojas singled to in Burdick. Kotsay summoned Dany Jimenez from the bullpen. Jimenez retired Jesus Aguilar for the third out.

The Marlins tied the game in the top of the ninth. Jimenez was still pitching for Oakland. With one out, Marlins’ catcher Nick Fortes homered over the wall in left field. Jimenez retired the next two batters. The A’s failed to score in their half of the ninth.

The A’s won the game in the bottom of the tenth. David MacKinnon was the ghost runner at second base. Mark Kotsay wanted the next hitter to lay down a sacrifice bunt to send MacKinnon to third. Marlins’ pitcher Richard Bleier uncorked a wild pitch.

MacKinnon went to third. Skye Bolt ended the game when his fly ball to centerfield was deep enough to get MacKinnon home with the winning run. Oakland wins 3-2.

The A’s host the New York Yankees for four games starting Thursday night. Former Yankee James Kaprielian (3-7, 4.29) will be on the mound to face his former team. The Yankees have not announced their starters for any of the games yet.