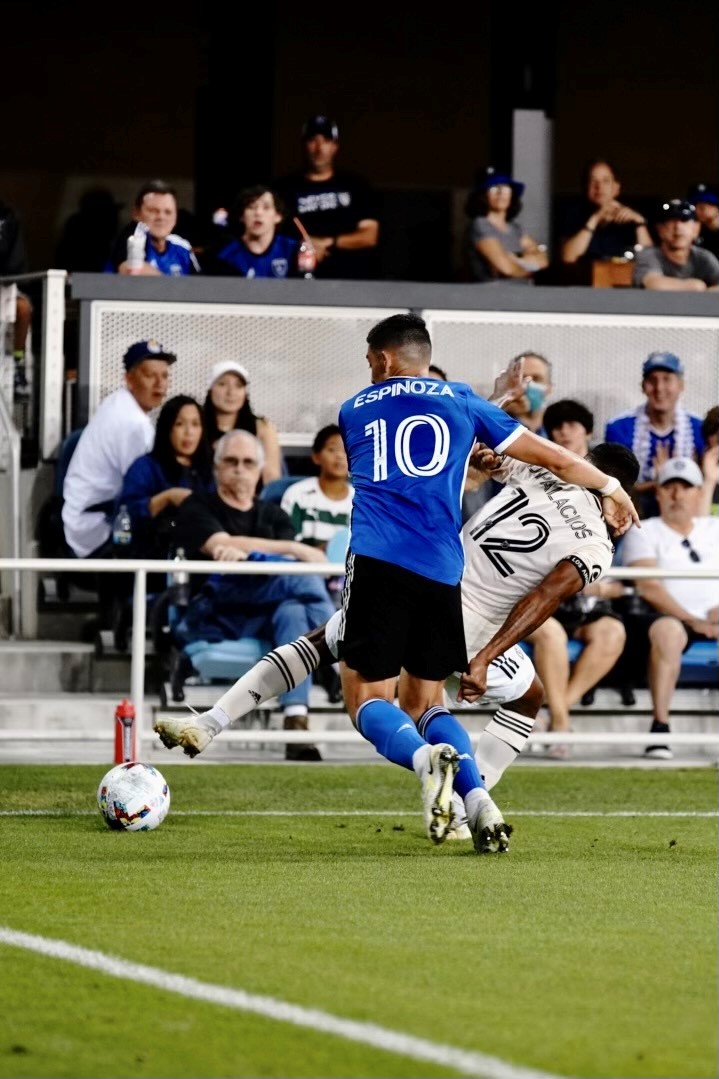 SAN JOSE — The MLS version battle of David versus Goliath went David’s way in a shocker.

Cade Cowell scored the game winning goal in the 77th minute as the San Jose Earthquakes pulled off a dramatic upset over LAFC, the best team in the league, 2-1 on Saturday evening at Pay Pal Park.

In front of a sold out crowd, in what had a playoff atmosphere like feeling, the ‘Quakes won for just the second time in its last eight matches. On the flip side, LAFC had its seven match winning streak snapped.

“Emotions are high right now. We need to be calm, but I believe tonight is one of the best games I have seen from this team this season. When you lose, you ‘stink’ and when you win, everybody wants to talk good things about you. The guys showed that we have personality and played good with and without the ball. And we did it,” interim head coach Alex Covelo said.

Cowell was set up by the Man of Match, Tommy Thompson, who had two assists on the night. Thompson ran down a ball near the end line when he centered the ball back into the middle where an unmarked Cowell blasted a one-timer top shelf past LAFC goalkeeper Maxime Crépeau for his second goal of the season.

“For me personally, it felt great to put in a good shift with the team, but I give a lot of credit to all the guys out there that fought until the end right in the middle of the difficult moment that we’re in. I think it’s exciting and it’s a night that I won’t forget anytime soon,” Thompson said.

San Jose (6-11-9-27 points) drew first blood in the 14th minute. Benji Kikanovic began a counter attack for the ‘Quakes. Christian Espinoza found Thompson along the end line and he chipped the ball over a LAFC defender to Kikanovic who buried a one-timer into the upper left corner for his fifth goal of the season.

LAFC (18-5-3-57 points) had trouble containing San Jose’s attack in the first half as they were playing back on the heels for the first 45 minutes.

The start of the second half saw LAFC change the momentum with chances early on. They cashed in the 54th minute on a brilliant play from Kellyn Acosta. The current USNMT’s midfielder glided a pass over to Kwadwo Opoku, who got behind Nathan on the play, and he chipped the ball over ‘Quakes goalkeeper JT Marcinkowski for his seventh goal of the season.

Covelo made substitutions in the 69th minute as he brought Cowell and Eric Remedi that helped switch the momentum back to San Jose.

Despite bringing in a powerhouse trio off the bench in the second half that consisted of 2019 MLS MVP Carlos Vela, Illie Sanchez and Jose Cifuentes, LAFC was not only able to score the equalizer but lost their composure in the process as their frustrations of being outplayed grew bigger down the stretch with ugly fouls that went for yellow cards.

Sanchez received two yellow cards in just 15 minutes of action when he was sent off for his second infraction and automatic red card in the 79th minute. Sanchez will be suspended for LAFC’s next match against the Austin FC on 8/26.

Marcinkowski finished the match with one save on two shots on goal. Crépeau made three saves on five shots in the losing effort.

Welsh international midfielder Gareth Bale made an appearance as a substitute in the 76th minute when he replaced Opoku. He has played in eight games with LAFC since being transferred from Real Madrid back in June.

The Earthquakes are now 6-7-6 in MLS play under Covelo.

UP NEXT: San Jose travels out to the Midwest to take on Sporting KC on Saturday 8/27 at 5:30pm at Children’s Mercy Park.