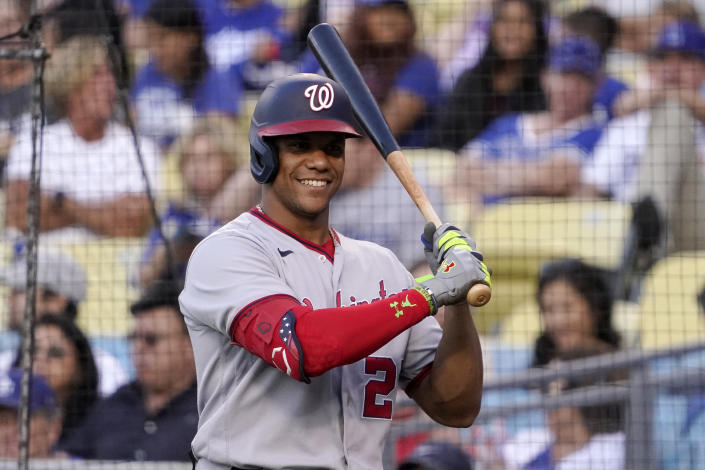 Juan Soto of the Washington Nationals is standing by to see what deal he could get as he is on the bubble before the MLB trade deadline on Aug 2, 2022 (AP News file photo)

On Headline Sports podcast with Jessica:

#1 Jessica, the Washington Nationals Juan Soto sweepstakes are on there are five possibilities, Los Angeles Dodgers, New York Yankees, New York Mets, St Louis Cardinals, and San Diego Padres, where he can go after turning down a 15 year $440 million offer by the Nationals.

#2 Unfortunately injury for one of the big draft picks for the Arizona Diamondbacks #2 draft pick Druw Jones who hurt himself with shoulder injury swinging the bats during batting practice before Tuesday’s game before playing the San Francisco Giants.

#3 Jessica, It was an emotional return for Toronto Blue Jays Buck Martinez who had returned to the broadcast booth from cancer treatment. Martinez had been out since the middle of April and got a rousing ovation from the Blue Jays crowd, players and his grandkids in attendance. Martinez by the way looked great you would have never known what he had gone through.

#4 It was in the making since 2008 the Jackie Robinson Museum in New York Jackie’s wife Rachel 100, watched the ribbon cutting along with daughter Sharon 72 now in a wheelchair and son David 70, for the opening of the museum. In 80 degree heat outdoors in New York City Robinson’s children spoke about the life and career of Robinson.

#5 San Francisco Giants pitcher Carlos Rodon apologized to Thairo Estrada who he kicked a bat leaning up against the bench into Estrada’s knee after giving up a three run home run to the Arizona Diamondbacks Christian Walker in the top of the third inning. Rodon apologized to Estrada, his teammates, and had a meeting with manager Gabe Kapler who said that things had been worked out with Rodon.