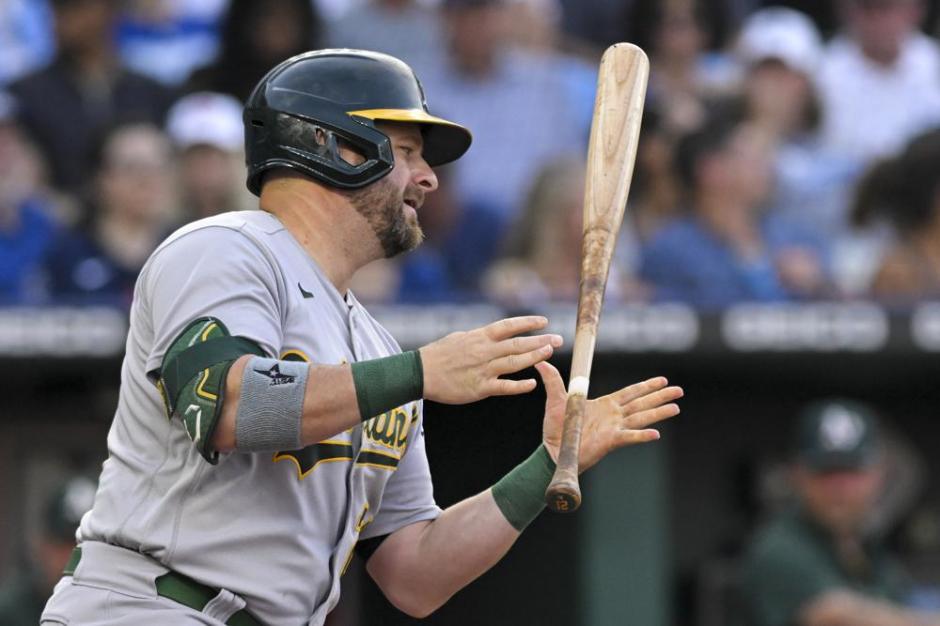 Oakland A’s catcher Stephen Vogt throws his bat after striking out in the second inning against the Kansas City Royals at Kauffman Stadium in Kansas City on Fri Jun 24, 2022 (AP News photo)

Oakland Loses Another One to KC 3-1

Friday night the Oakland A’s (23-49) took on another struggling team In Kansas City, the Royals (26-43). Oakland is coming off three straight losses against Seattle at the Oakland Coliseum.

Cole Irving took the mound for Oakland. He pitched 5 2/3 innings and did have a good game but it wasn’t enough as the A’s failed to give him any run support in the 3-1 loss at Kauffman Stadium in Kansas City.

He has not won a game since April 24th. Something that he rarely does is allow more than a single home run in a game but Kansas City’s Edward Olivares did exactly that hitting one in the third inning and a second in the fifth inning.

The Olivares home run in the third inning gave Kansas City the early lead 1-0. In the fourth inning Seth Brown hit a single and drove Tony Kemp home to tie up the game 1-1.

Olivares’ second home run gave the lead back to the Royals in the fifth inning 2-1. The Royals solidified the win in the sixth inning when Carlos Santana singled driving Hunter Dozier home.

Zach Greinke pitched for Kansas City back with the Royals handing the A’s their fourth loss in a row.

Oakland had six hits in the game but but only managed the one run in the fourth inning. They could not string hits together and that has been a problem for the team all season. Seth Brown and Sean Murphy each had two hit games for the A’s.