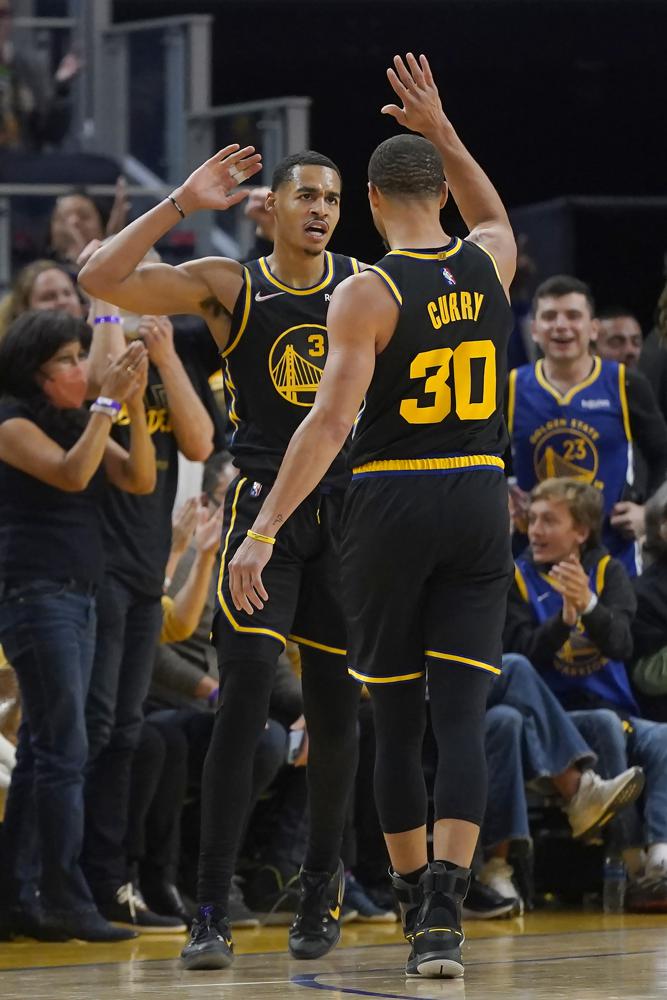 In first half action at the Chase Center in San Francisco on Sat Apr 16, 2022 Golden State Warriors guard Jordan Poole, left, is congratulated by guard Stephen Curry (30) in game one of the NBA Playoffs against the Denver Nuggets (AP News photo)

On the Warriors podcast with Barbara:

#1 Does Warrior head coach Steve Kerr really have a tough decision to make deciding to go with Stephen Curry or Jordan Poole who scored 30 in game one against the Denver Nuggets.

#2 The Nikola Jokic of the Nuggets led with 25 points on Saturday not enough to catch the Warriors who beat them by 16 points.

#3 Curry who scored 16 said that he had a good time watching Poole work his offensive magic who admired his ability to be the leading scorer.

#4 Barbara, Klay Thompson contributed with 19 points was second in scoring the Warriors had to be glad to have him healthy considering all that he’s been through before this season.

#5 Warriors host the Nuggets tonight for game 2 at Chase Center do you see this being a competitive contest and the Nuggets will really have to get up for this one or the Warriors should handle them just like they did in game one.

Join Barbara Mason for the Warriors podcasts each Monday at http://www.sportsradioservice.com