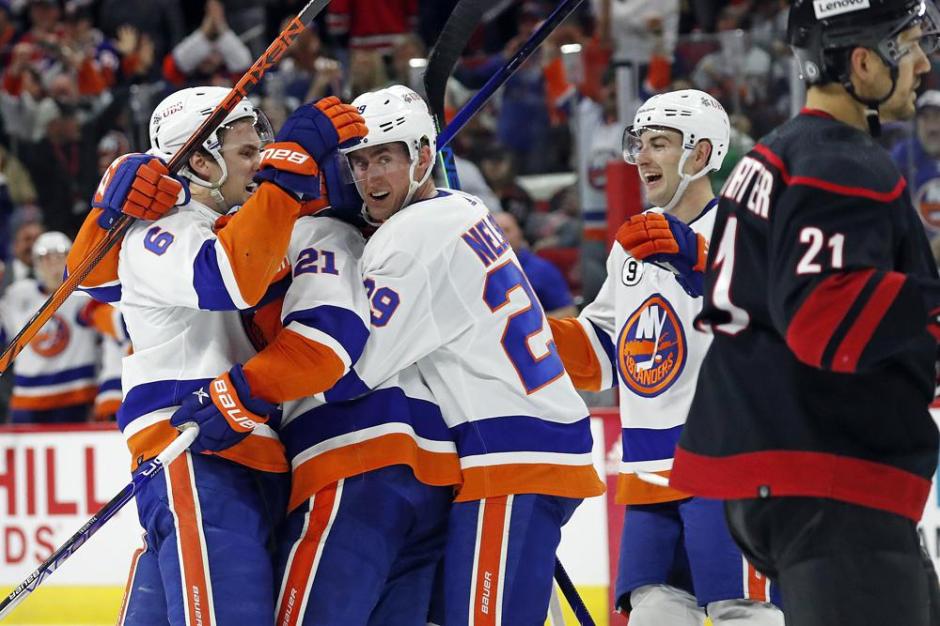 The New York Islanders are jubilant after a goal scored by Kyle Palmieri (21) during the third period against the Carolina Hurricanes at the PNC Arena in Raleigh on Fri Apr 8, 2022 (AP News photo)

#1 With just 14.1 second left with the score tied 1-1 the New York Islanders (33-28-9) Kyle Palmieri found the back end of the net and got the game winning goal to help defeat the Carolina Hurricanes (46-18-8). The win comes after the night the Isles clinched a playoff spot.

#2 In overtime last night the Boston Bruins (45-21-5) Charlie Coyle got the game winning goal at 3:37 to get the Bruins a 2-1 win over the Tampa Bay Lightning (43-20-8). Coyle scored to the right of Lightning goalie Andrei Vasilevskiy.

#3 In another nail biter with just 37.3 second left in overtime in the contest the Florida Panthers (50-15-6) Sam Bennett scored the game winner to help defeat the Buffalo Sabers (. Bennett’s goal was redirected from Aleksander Barkov’s pass in front of the net it was Bennett’s 100th NHL goal and 200th point.

#4 Matt, if you like overtime in the NHL this was your night the St Louis Blues came from behind to defeat the Minnesota Wild at the Enterprise Center. The Blues Robert Thomas scored at 1:27 in overtime for the gamer. Thomas’ shot was a one timer from the left faceoff circle.

#5 The Colorado Avalanche’s Cale Makar scored the game winner in overtime in the fourth NHL overtime on Friday as the Aves defeated the Winnipeg Jets 5-4 at Canada Life Centre. Makar had help earlier the Avalanche’s Nathan McKinnon and Andre Burakowsky had scored goals.

Matt does the NHL podcasts Saturdays at http://www.sportsradioservice.com