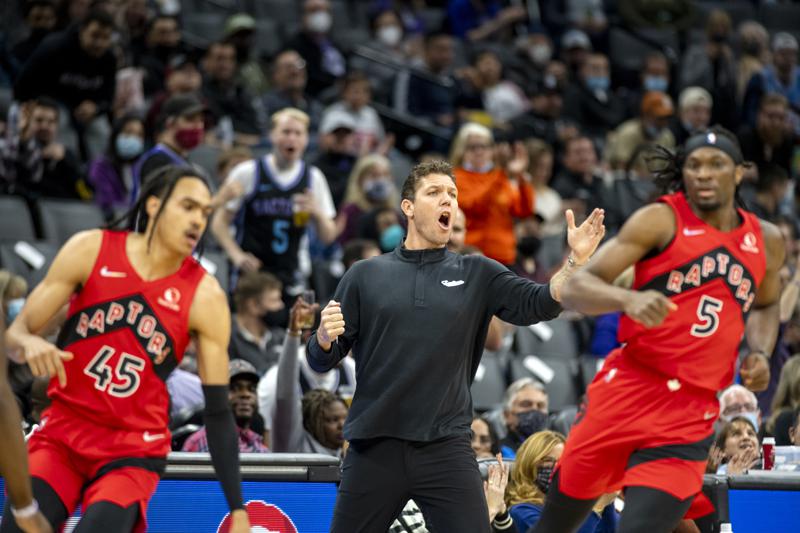 Sacramento Kings former head coach Luke Walton yells in vain to his defense to try and shut down the Toronto Raptors offense on Fri Nov 19th at the Golden One Center in Sacramento Walton’s last night as head coach was Sat Nov 20, 2021 against the Utah Jazz (AP News photo)

It’s been a long time coming and now the Kings have come to the decision that they need to move in a different direction and it does not include Head Coach Luke Walton. His firing has been brewing for quite awhile now but the fact that the team has lost seven of their last eight games was the straw that broke the camel’s back. It was just not working and hasn’t worked for awhile. His position as Head Coach has been precarious at best and now it’s finished.

Both De’Aaron Fox and Tyrese Haliburton expressed that they had Luke Walton’s back through this rough patch. “I got his back, we all do,” said Haliburton. “He’s put a lot of time and a lot of trust in us as players.,” he added. And so it would seem that he is liked by his players but the bottom line in the NBA is winning and the Kings are having a lot of trouble doing that lately.

If you look over Walton’s tenure with the Kings he has a 68-93 record and his former team sits at No. 12 in the Western Conference with a 6-11 record. Sacramento has not reached the playoffs since 2006. So with this firing Walton has moved on from a second team as head coach. The Lakers let him go after a 2016-19 stint. So it remains what the future holds for Luke Walton in the NBA in any position.

Sacramento needs a coach that can turn this team around and he would have some talented players to do just that. Right now the Kings have the tenth highest scoring offense in the NBA but they are giving up the 26th most points per game in the league. The defense has needed a lot of work for quite awhile now but there is definitely a lot of ability on this roster.

It is a shame because for a hot minute it looked like we were going to see an improved team this season but it all fell apart the past few weeks and management made their decision. Alvin Gentry has been named as interim head coach. Gentry’s first night as head coach will be Monday night against the Philadelphia 76ers at the Golden One Center in Sacramento. Sacramento Kings beat reporter Jeremiah Salmonson will have full coverage and a look on the coaching change Monday night.