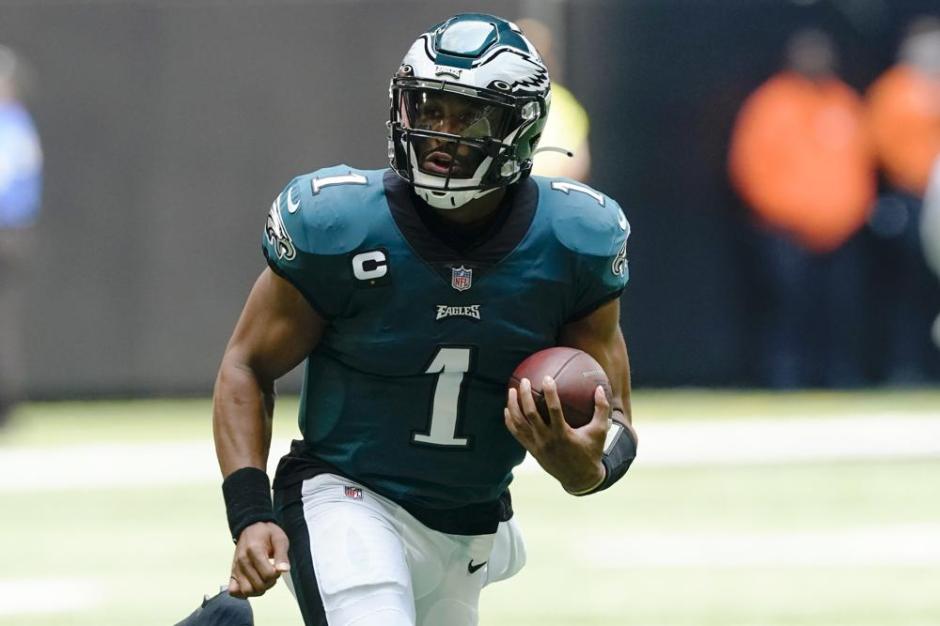 Philadelphia Eagles quarterback Jalen Hurts carries the football against the Atlanta Falcons at Mercedes Benz Stadium in Atlanta in the first half of action last Sun Sep 12, 2021 during week 1 (AP News photo)

On the 49ers podcast with Jeremiah:

#1 San Francisco 49ers inside linebacker Dre Greenlaw who picked off Detroit Lions quarterback Jerod Goff’s pass for a 39 yard return last Sunday during week one will have surgery for an injured groin. Greenlaw is one of three starters for the 49ers who will be out of the line up this Sunday in week 2 in Philadelphia. Greenlaw is expected to be out of action for six to eight weeks.

#2 The other two 49ers who will be lost for the rest of the season are cornerback Jason Verett and running back Raheem Mostert out with knee injuries.

#3 Azeez Al-Shaair will taking over Greenlaw’s spot at linebacker Al Shaair impressed head coach Kyle Shanahan in the game in Detroit last Sunday with seven tackles, two of those he threw for loses, and broke up two passes.

#5 The Philadelphia Eagles will host the 49ers at Lincoln Financial Field in Philadelphia for week 2. Last week the Eagles crushed the Atlanta Falcons in Atlanta 32-6. Eagles quarterback Jalen Hurts put the hurts to the Falcons with 27 completions out of 35 throws for 264 yards and three touchdowns. How do you see the Eagles matching up against the 49ers in week 2?

Join Jeremiah for the 49ers podcasts each Saturday night at http://www.sportsradioservice.com