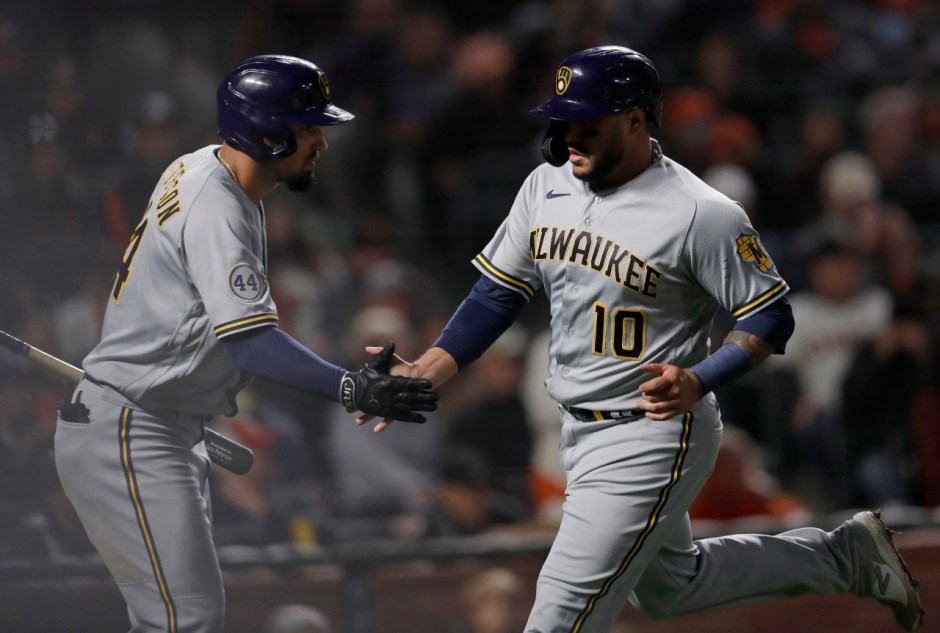 SAN FRANCISCO–The playoff atmosphere was present at Oracle Park on Monday night, but the Giants were minus a few, key pieces.

For the first time in 28 years, the Giants are exceptional, and so are their opponents. The Giants, Brewers and Dodgers are all more than 25 games above .500, setting up a week of playoff preview showdowns. Now, the dinged up Giants have to show they’re ready to answer the bell.

Instead of focusing in on the challenge of facing one of the NL’s premiere starters in Corbin Burnes, the Giants were preoccupied with making themselves whole heading up to the first pitch. Starting pitchers Alex Wood and Johnny Cueto were placed on the injured list with COVID complications, and both players saying they were likely experiencing effects from the virus. Reliever John Brebbia and Jason Vosler were recalled from Sacramento, and Jose Quintana, the 2016 All-Star with the Cubs was claimed off waivers from the Angels.

So for the second, straight game, the Giants were forced to turn to their bullpen from the start with Jose Alvarez as the starter, and Jarlin Garcia seeing the most activity. In all, seven Giants relievers took a turn and the Brewers essentially picked the group apart, scoring single runs in the first, second and eighth innings to pull out a 3-1 win.

Afterwards manager Gabe Kapler was philosophical, feeling that his bullpen group did what they could under difficult circumstances. He singled out Garcia, who went 3 2/3 innings, needing just 40 pitches to complete the stretch and keep the Giants within striking distance, down 2-0.

The Brewers won for the 80th time on the season, and the anticipation of what matchups may materialize in October were present in their minds throughout the evening.

“That was definitely a playoff atmosphere and something that could be foreshadowing of what we see in the postseason,” said Burnes, who cruised through six innings to pick up the win. “It’s always good to get the first one of the series. That was definitely a big one tonight.”

Burnes allowed just four hits and no walks. His first taste of adversity didn’t come until the seventh when he let the first two batters reach. But manager Craig Counsell turned to his bullpen and they shut the door after Brandon Crawford’s RBI single pulled the Giants within 2-1.

Josh Hader pitched a scoreless ninth and picked up his 28th save.

The Giants saw their cushion in the NL West shrink to 1 1/2 games as the Dodgers handled the Braves in Los Angeles. Also, it’s no longer a foregone conclusion that the Dodgers or Giants will finish with the NL’s best record, not with the Brewers in the mix, and holding a commanding lead in the NL Central. That possibility gives pause to the playoff matchups that seem to have the two West Coast rivals on a collision course for October.

On Tuesday, the Giants are hopeful they will have Cueto available to start in a matchup with Milwaukee’s Brandon Woodruff.