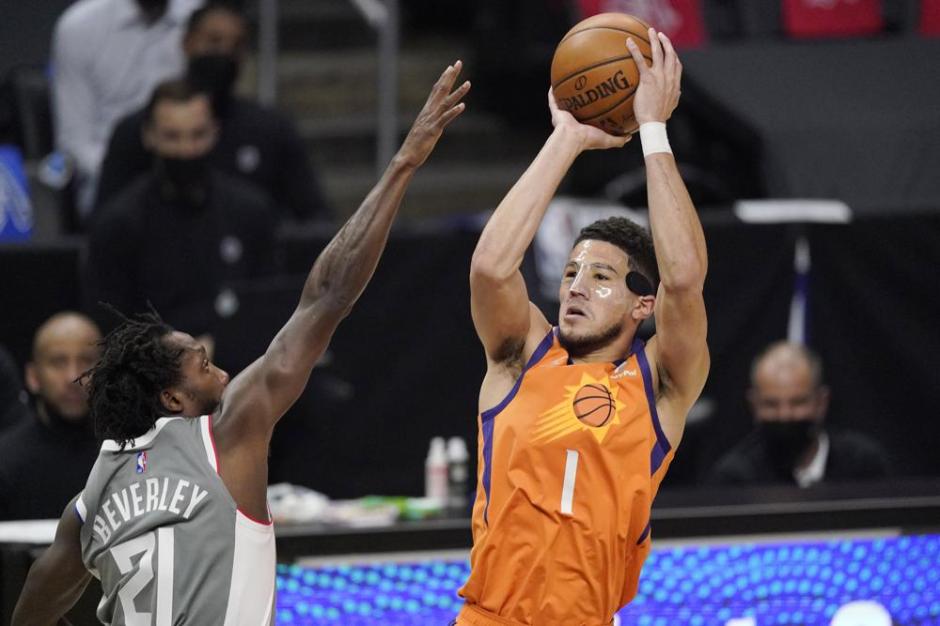 The Phoenix Suns guard Devin Booker takes a shot against the Los Angeles Clippers guard Patrick Beverly during the first half of game 4 of the NBA Western Conference Finals at Staples Center in Los Angeles Sat Jun 26, 2021 (AP News photo)

On the NBA Western Conference Finals podcast with Joe:

#1 Joe, You just can’t imagine the pressure the Los Angeles Clippers must feel after taking a 84-80 loss in game four on Saturday and now they are down 3-1 with game five in Phoenix on Monday night.

#3 The Suns Devin Booker led with 25 points and fouled out of the contest in the final minute of the game. Booker gave it everything he had and because of his effort the Suns were able to out score the Clippers in the end.

#4 If the Suns can beat the Clippers on Monday night it would mark the first time since 1993 that the Suns have been in the NBA Finals it’s a been a long road to get this far but the Suns are now just one game away from getting to the finals.

#5 To show you how successful the Suns have been in the playoffs they took out the Lakers in round one 4-2 and the Denver Nuggets in a sweep 4-0 and momentum in this series with a 3-1 lead over the Clippers.

Join Joe Hawkes for the NBA Finals podcasts next Sunday at http://www.sportsradioservice.com