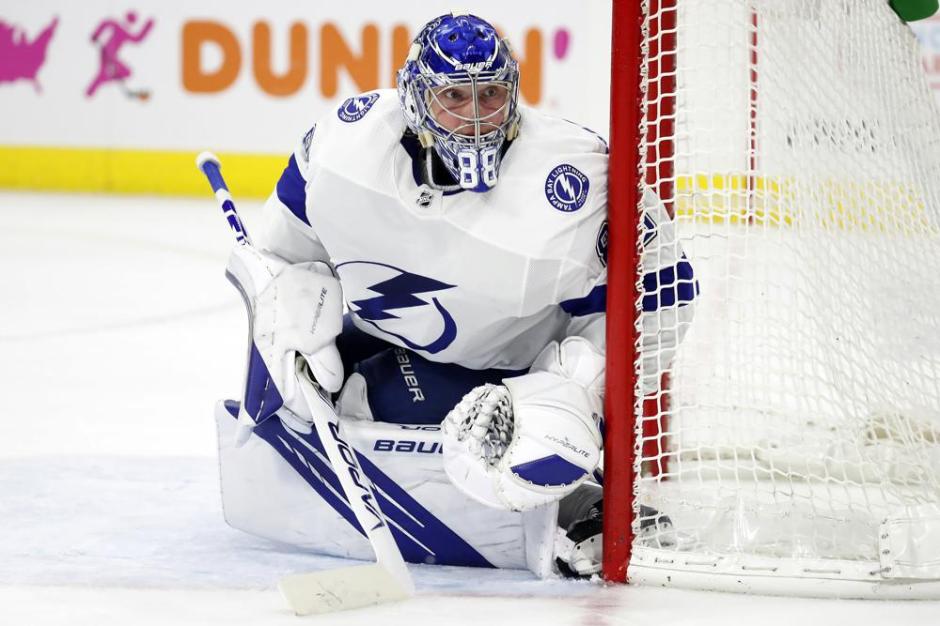 The Tampa Bay Lightning goaltender Andrei Vasilevskiy is on the look out for the next puck to be shot his way in the second period of game 2 on Tue Jun 1, 2021 in Carolina (AP News photo)

On the Stanley Cup Playoff podcast with Len:

#1 The Tampa Bay Lightning (2-0) got by the Carolina Hurricanes 0-2) 2-1 Alex Killorn and Anthony Cirelli were the Lightning scorers and it was enough to get by the Hurricanes in game 2 a very close game 2-1.

#2 Len talk about the job between the pipe for the Lightning’s Andrei Vasilevskiy stopping 31 out of 32 shots.

#3 The Hurricanes only goal was from Andrei Svechinkov in the third period but time ran out and Carolina finds itself two games in the hole to Tampa Bay.

#4 For Vasilevskiy before the game was nominated for the Vezina Trophy which is presented to one of the top three finalists for NHL goaltenders the other two nominated Marc Andre Fluery of the Vegas Golden Knights and Phillipp Brubauer of the Colorado Avalanche Vasilevskiy in game 1 stopped 37 Carolina shots and had 15 saves in the first period.

#5 So after the first two games in Carolina the Lightning and Hurricanes head to Tampa Bay where the Lightning have home ice and a 2-0 advantage.

Join Len Wednesdays for the the NHL Stanley Cup Playoff podcasts at http://www.sportsradioservice.com