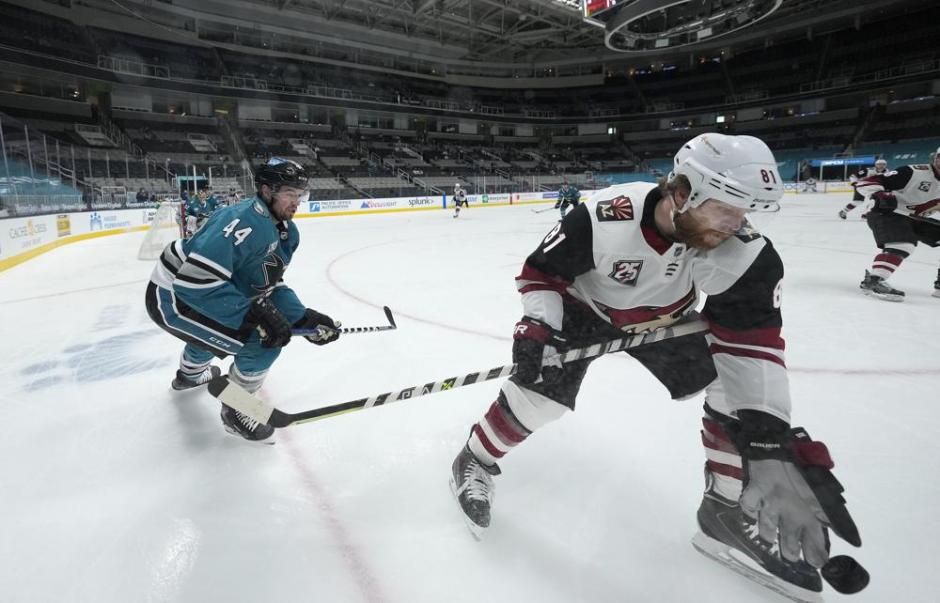 The Arizona Coyotes Phil Kessel (81) tries to quickly handle the puck against the San Jose Sharks Marc Edouard Vlasic (44) at the SAP Center in San Jose on Fri May 7, 2021 (AP News photo)

The San Jose Sharks gave up a 2-0 lead to lose 5-2 to the Arizona Coyotes Friday. Phil Kessel scored his 900th NHL point in the game with a break-away goal in the third. Other Coyotes goals came from Victor Soderstrom, Conor Garland, Michael Bunting and Jan Jenik. Darcy Kuemper made 26 saves for the win. Erik Karlsson and Timo Meier scored for San Jose and Josef Korenar made 29 saves in the loss.

After the game, Sharks Head Coach Bob Boughner talked a little about what he had seen from the younger players during the last several games: “They’re a little bit in and out, and then they’re still learning the ropes and how to come every night and prepare and be consistent at the NHL level.” Boughner mentioned Noah Gregor, Rudolfs Balcers and Alexander Chmelevski as players in this category.

Erik Karlsson scored the only first period goal at 3:47. With some traffic in front of Kuemper, Karlsson took a shot from high in the slot. Tomas Hertl got an assist.

At the end of the first period, John Leonard fell, face-first, into the boards by the benches. After some attention from the trainer he was helped from the ice and into the dressing room. He did not return to the game. There were no specific updates about his condition after the game. Boughner did say that “he looked like he was in pretty rough shape,” during the first intermission.

The Sharks out-shot the Coyotes 9-6 in the first, with two of those coming on the power play.

The Sharks’ second goal came from Timo Meier off the rush with linemates Alexander True and Ivan Chekhovich. Meier took the shot from above the face-off dot for his 11th of the season at 3:30 of the second. Chekhovich earned his first NHL point, an assist in his second NHL game.

Victor Soderstrom cut into the Sharks’ lead, scoring for the Coyotes at 4:59. He took a shot into the far side of the net through traffic around the net. Assists went to olive Ekman-Larsson and Conor Garland. It was Soderstrom’s first NHL goal.

Conor Garland tied the game at 4:59, during a 5-on-3 power play. Garland and Jakob Chychrun played catch across the ice before Garland slapped the puck past Korenar. Chychrun got the assist.

The Coyotes out-shot the Sharks 13-9 in the second period, with three of those coming on the power play. The Sharks had one power play that generated two shots.

Phil Kessel broke the tie 4:53 into the third period. Kessel was already behind the Sharks defense when Dvorak’s pass found him. He broke away and beat Korenar on the glove side. Assists went to Christian Dvorak and Alex Goligoski.

The Sharks seemed to have tied the game at 7:46 with another goal from Erik Karlsson but it was called back as an off-side play.

Michael Bunting gave Arizona a two-goal lead at 9:57. Evander Kane broke his stick on a shot and immediately had to hustle back to defend one-on-three. He was unable to give his goaltender much help. Conor Garland got an assist.

The Coyotes out-shot the Sharks 15-10 in the third. In the face-off circle, the Sharks won 54% of the draws. Evander Kane had 6 shots on goal, and Tomas Hertl and Erik Karlsson each had five. For Arizona, Jakob Chychrun and Michael Bunting each had five shots.

The Sharks next play on Saturday, again in San Jose, against the Coyotes at 7:30 PM PT.