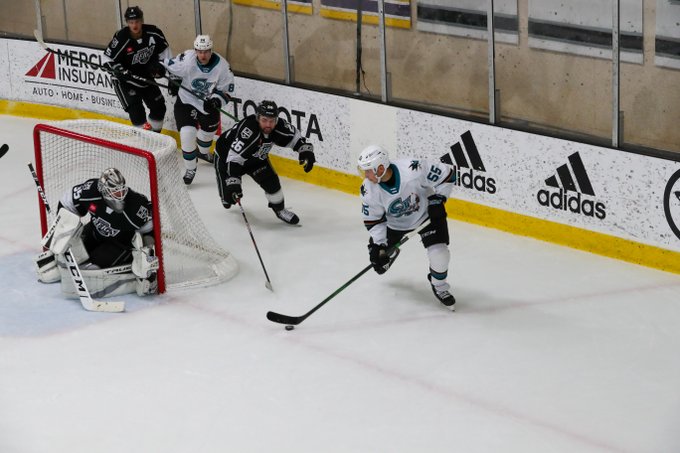 The San Jose Barracuda were able to skate ahead of the Ontario Reign at the Toyota Performance Center in El Segundo on Sun Apr 25, 2021 (@ sjbarracuda photo)

EL SEGUNDO, Calif-The San Jose Barracuda created a new line and it paid dividends right away as they upended the Ontario Reign on 4-2 on Sunday afternoon at the Toyota Performance Center.

Ontario (10-18-4-0) drew first blood on the power play in the first period. Akil Thomas’ shot from the left slot was saved by ‘Cuda goalie Alexei Melnichuk but the rebound leaked out to Martin Frk who buried a wrist shot under the crossbar into the back of the net for his second goal of the season at the 12:16 mark.

San Jose (13-11-4-2) answered back immediately just seven seconds later. Scott Reedy won the ensuing faceoff at center ice over to Jake McGrew who raced down the right wing and whistled a wrist shot off the far post past Reign goalie Jean-Francois Berube for his third goal of the season.

With Joachim Blichfeld called up to the San Jose Sharks, ‘Cuda head coach Roy Sommer put together the line of Reedy, McGrew and Jayden Halbgewachs. Each member of the newly formed line each had a goal in the game as they had a hand in 75% of San Jose’s goals. The lined combined for eight total points.

The Barracuda gained its first lead of the game just over two minutes later. A turnover by the Reign at its own blueline led to a shot by McGrew that Berube couldn’t corral. Reedy crashed the net and jammed home the rebound past Berube for his fourth goal of the season at the 15:47 mark.

Ontario out shot San Jose 13-7 in the opening 20 minutes.

San Jose went up 3-1 early in the second period. The ‘Cuda kept sustained pressure inside the Reign’s zone. Jaycob Megna collected the puck at the left point and fired home the puck past a screened Berube for his second goal of the season at the 7:15 mark. Megna snapped a 19-game goal less draught.

Ontario cut the lead to a one-goal game late in the second period with its second power play goal of the game. Alex Turcotte lasered a wrist shot from top of the circle on the left side past Melnichuk into the right corner for his third goal of the season at the 16:10 mark.

The Barracuda scored an insurance goal early in the third goal and took control of the third period. Once again the line of McGrew, Reedy and Halbgewachs created the much needed offense.

McGrew threw a shot in on net from the right slot. Reedy’s rebound attempt was saved by Berube, but Halbgewachs cashed in on the second chance right at the doorstep of the crease as he lifted the puck over the sprawled out Berube for his fifth goal of the season at the 4:22 mark.

The Three Stars of the Game were: 1) Reedy 2) McGrew 3) Halbgewachs.

UP NEXT: San Jose returns home to host the Bakersfield Condors on Tuesday 4/27 at 6:00pm at Solar4America Ice.