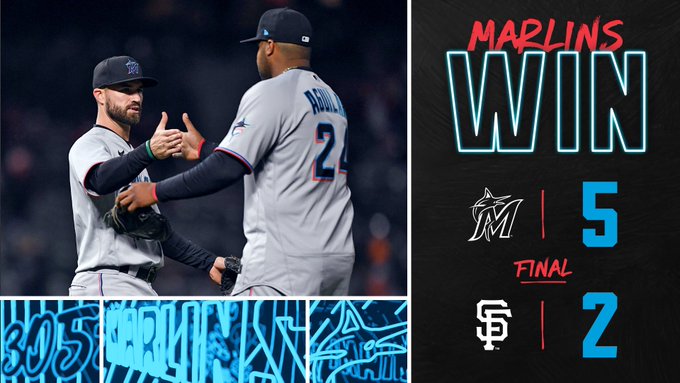 The Miami Marlins Jesus Aguilar gets congratulated after belting a tie breaking two run homer in the top of the ninth against San Francisco Giant reliever Gregory Santos at Oracle Park in San Francisco on Sat Apr 24, 2021 (@ Marlins image)

All things pointed towards another win for the San Francisco Giants, but a funny thing happened to hearing I Left My Heart in San Francisco.

Corey Dickerson added a triple that scored Garrett Cooper and then Cooper scored the final run of the inning, when Jon Berti hit a sacrifice fly for his second run batted in of the evening.

Berti put the Marlins on the board in the top of the seventh inning, when he hit his first home run of the season off of Giants starter Kevin Gausman.

Austin Slater gave the Giants a 1-0 lead in the bottom of the fifth inning, when he grounded out to third base to score Alex Dickerson and on the play, Buster Posey advanced to third base.

Unfortunately, the potential big rally came to screeching halt, when Mauricio Dubon lined to Jazz Chisholm, Jr., who threw to Berti at third base to complete the double play to get Posey to end the inning.

Gausman picked up the no decision, as he went eight innings, allowing one run on just two hits, walking one and striking out 11.

Pablo Lopez pitched a great game for the Marlins, as like Gausman, he did not fare in the decision. Lopez went six innings, allowing one run and also allowed two hits, walking just one and striking out seven.

The Marlins bullpen was just a little bit better, as they allowed only one run on three hits over the final three innings to secure the victory for Dylan Floro, who pitched the eighth inning for the Marlins.

Closer Yimi Garcia came on in the bottom of the ninth inning in a non-save situation and gave up a solo home run to Mike Yastrzemski, and double to Brandon Belt before getting Alex Dickerson to fly out to left field to end the game.

NOTES: Belt went 2-for-4 on the night, as his streak reached 31 straight games of reaching base against the Marlins, dating back to July 19, 2014.

Once again, the Giants played a game, where the game was decided by four-runs-or-fewer, extending the streak up to 21 games, the second longest streak by the Giants to a start a season since 1997, when they played 23 consecutive games in that fashion.

UP NEXT: Logan Webb closes out the series on Sunday afternoon, as he takes the mound, looking for that first win of the season for the Giants. While the Marlins, who look to split the series will send Nick Neidert to the hill.