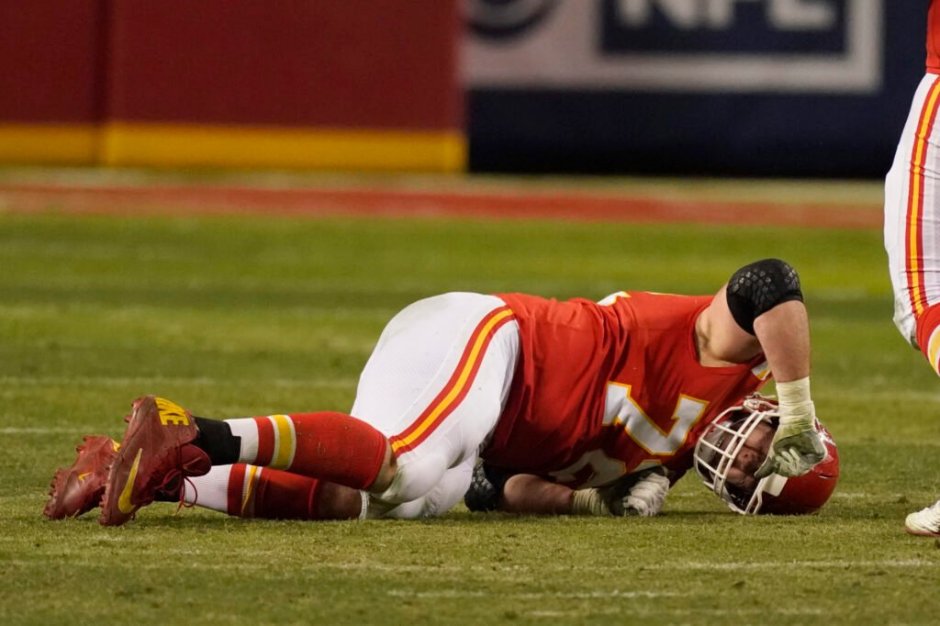 The Kansas City Chiefs left offensive linebacker Eric Fisher is laid out after tearing his Achilles and will be out for Super Bowl LV in Tampa Bay. Chiefs head coach Andy Reid said he will replace Fisher with right tackle Mike Remmers (photo from The Athletic)

On the Super Bowl LV podcast with London:

#1 London, talk about Kansas City Chiefs offensive left tackle Eric Fisher losing him for the Super Bowl to a Achilles injury that he incurred during the Championship game against the Buffalo Bills. Fisher was blocking and fell on his back. His leg and foot took an awkward twist as he went down. Fisher will be replaced by right tackle Mike Remmers.

#2 London, after everything that has happened to Chiefs quarterback Pat Mahomes in recovering from his pinched nerve and turf toe back on Sunday 17th, his rebound was impressive to get the Chiefs the win and in the Super Bowl after the Chiefs’ Championship win over the Buffalo Bills 38-24.

#3 It was a quite an afternoon for Mahomes, who had showed no signs of being hurt, throwing for 325 yards and three touchdowns. Mahomes also was quite mobile and not afraid of getting sacked from behind.

#4 London, how good of a position would you say the Tampa Bay Buccaneers are in for the Super Bowl? They’re coming off a convincing win over the Green Bay Packers 31-26 and Bucs quarterback Tom Brady with his resume of ten Super Bowls and six Super Bowl rings.

#5 Tom Brady Sr. says that Tom Jr’s former coach Bill Belichick is on the hot seat right now. How much is that true after Belichick and the Patriots see how far Brady has come with the Bucs?

Join London during Super Bowl weeks on Wednesdays for the Super Bowl LV podcasts at http://www.sportsradioservice.com