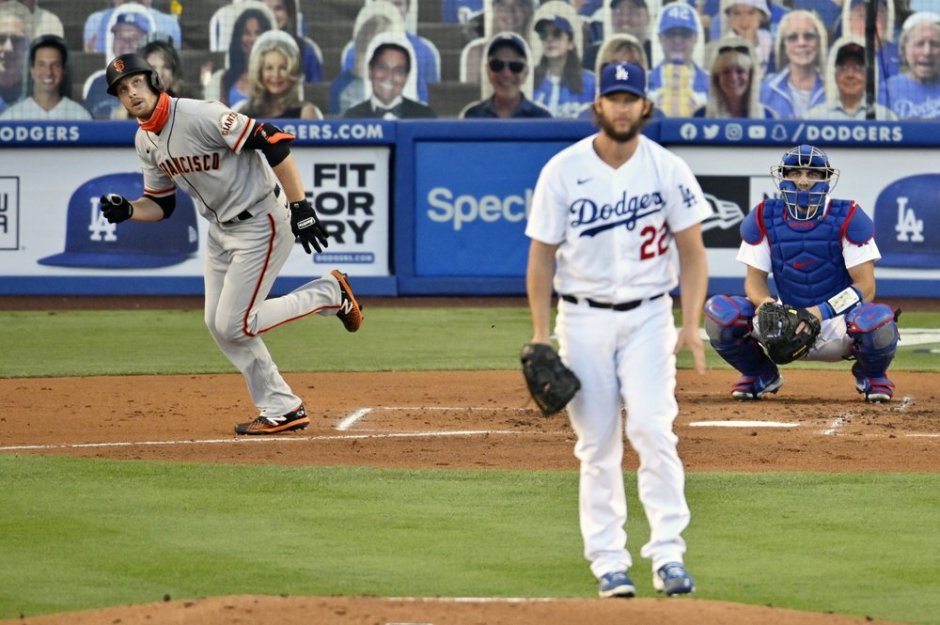 Austin Slater joined an exclusive club in Game Two of the three-game series between the San Francisco Giants and the Los Angeles Dodgers.

Slater became only the seventh player to hit two home runs in the same game versus Kershaw in the same game, as the Giants hung on to defeat the Dodgers 5-4 at Dodger Stadium.

Leading off the top of the third inning, Slater hit a solo home run over the center field wall to give the Giants a 1-0 lead and then two batters later, Mike Yastrzemski made it 2-0, as he hit a home run into the right field bleachers.

Just two innings later in the top of the fifth inning, Slater did it again, as he launched his second home run of the game and the season to give the Giants a 3-0 lead.

After Donovan Solano doubled to left field, Yastrzemski made it 4-0, as he doubled off of Kershaw and that was the end of the night for Kershaw.

Johnny Cueto was cruising into the bottom of the sixth inning, as he was throwing a no-hiter; however, he it was gone after the first batter of the inning after a weird play in the outfield.

Enrique Hernandez hit a fly ball to left field that should have been an easy out for Hunter Pence, but Pence lost the ball in the lights and Hernandez ended up on third base with a triple. Immediately after the Hernandez triple, Austin Barnes grounded to shortstop that allowed Hernandez to score from third base.

Both Joc Pederson and Cody Bellinger walked, but inside of pulling Cueto, who was limping from an apparent leg injury, Giants manager Gabe Kapler allowed Cueto to stay in the game and face nemesis Justin Turner, who took the right-hander deep to cut the Giants down to 5-4 and that was the end of the line for Cueto, who was replaced by Tony Watson, who got Max Muncy to pop out to Chadwick Tromp.

In all, Cueto was fantastic, as he went five and two-thirds innings, allowing four runs on just two hits, walking three and striking out three to pick up his first win of the season.

On the other side of things, Kershaw went 4.1 innings, allowing four runs on seven hits, walking one and striking out six.

This was the second shortest start in Kershaws career against the Giants, a team that he was 23-12 with a 1.74 earned run average in his career. It was also the first time that he ever allowed three home runs to the Giants in the same game in 49 starts.

Trevor Gott walked one in the bottom of the ninth inning, but was able to get the final out for his fourth save of the season.

The quartet of Slater, Solano, Yastrzemski and Evan Longoria, the first four batters of the Giants lineup went a combined 9-for-19 with three home runs and four batted in.

Once again, the Giants bullpen was outstanding, as Watson, Trevor Rogers and Gott went the final 3.1 innings, allowing just a walk and strikeout, as the Giants put an end to their two-game losing streak.

NOTES: Cueto was forced to leave the game with blister on his toe, and Jeff Samardzija will not throw for seven to 10 days due to inflammation to his rotator cuff and will return to the Bay Area, when the Giants head to Houston.

UP NEXT: Kevin Gausman will start the finale for the Giants, as he looks for his first win of the season, while Walker Buehler will take the ball for the Dodgers.

BaseballReference.Com contributed to this report