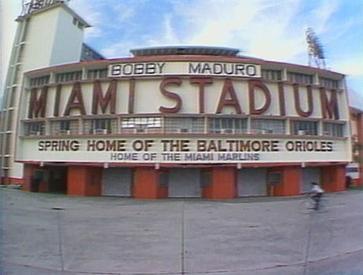 Bobby Maduro Miami Stadium in Miami the former spring training home of the Baltimore Orioles was one of the founding teams that Amaury worked for in starting his career in Major League Baseball (wikipedia.com photo)

As the 2020 Season Opens Your Favorite Baseball Team

Finally, the baseball season gets under way on Thursday. The inaugural game as the NY Yankees visit the World Champion Washington Nationals and later the San Francisco Giants visit the Los Angeles Dodgers.

Baseball is generational. Good chance that your father (with all the respect to mother) introduced you to the game. My father surely did since I was a little boy playing catch with him and my brother and taking me to Estadio de El Cerro in Havana, to watch the famous Cuban Professional Winter League.

Some people grow up following a team, because that was the team that their family rooted for, as simple as that. That is one of the beauties of the game we all love. But, many might have a preference for one of more teams. While growing up my team in Cuba was Leones del Habana (Havana Lions). In the US because a country of its size and tradition there are numerous people that were born in one city, rooted for their team there, but moved someplace else and now pledge their allegiance to their home team.

In the US, the first Major League team I saw were the Baltimore Orioles, in the early 1960’s when they trained at the old Miami Stadium, in Miami, Florida, later named Bobby Maduro Stadium, who was a Cuban entrepreneur and executive who was dedicated to the game of baseball. I was lucky enough -through a friend- to have worked for the Baltimore Orioles as a bat boy during Spring Training and I will forever remember the players of the Orioles during those years. Milt Pappas, Brooks Robinson, Jackie Brandt, John (Boog) Powell, Gus Triandos and many others. I was on the field with them, and for me they were like Gods.

So for me, my introduction to Major League Baseball was the Orioles, although I have visited Baltimore, but never lived there. It was like my first love to baseball in the US, and therefore, the Orioles will forever have a place in my heart. As a broadcaster I enjoy the game and I always want to see the best baseball possible, I like to see the Oakland Athletics win their fifth World Series in Oakland this year. I was broadcasting A’s games the last time they won it in 1989, a historical year and World Series with the Loma Prieta earthquake right in the middle of the series.

So (for some) it it is possible to have a double-allegiance in baseball. The Orioles have been a terrible team during the last few years but they also had some great years when Earl Weaver was their manager. As a professional in this business, yes, the A’s are definitely my team, but the Orioles are always in my heart, because they are part of my life, the memories of those years as a youngster, my family a much different Miami than today. My kids are also huge A’s fans who used to seat right behind the visiting dugout at the Coliseum with their Mom during the great years of Billy Ball and later Tony LaRussa, Dave Stewart, Ricky Henderson and the Bash Brothers. Those years for the A’s were like the Bruce Springsteen hit, “Glory Days”

My question to you the reader, which is your favorite team or teams? Did you adopt the team because your father your mother, anybody in your family or a friend introduced you to the team as a fan? Did you just follow baseball because you like the game, regardless of who is playing? Who do you root for? And my last question. Do you still own that terrible cap that has the A’s logo in one side and the Giants logo on the other? Just asking.

Baseball is the longest season of any of the main sports leagues in the country. It is a grind that develops a lot of character on people, demands a lot of loyalty, passion and dedication to your favorite team.

I wish your favorite team enjoys a good abbreviated season, and regardless of your opinion, on how you feel about baseball this year, we are all making history in 2020 and that includes baseball with this new experience.

The season opener for the Oakland Athletics is this Friday the 24th when the Los Angeles Angels are the first visitors to the Oakland Coliseum for a weekend-four-game series which concludes on Monday. Joe Maddon in his first season as the Manager of the LA Angels and Bob Melvin manager of the A’s have already named their pitchers. This should be fun, two of the best skippers in the game.

A’s fireballer Frankie Montas is scheduled to start, while lefty Andrew Heaney will open the season for the Halos.

You can follow all the action En Español; on KIQI 1010AM radio here in the Bay Area and KATD 990AM Sacramento- Stockton. Every A’s game at home on weekend and night games at home on weekdays will be broadcast in Spanish.