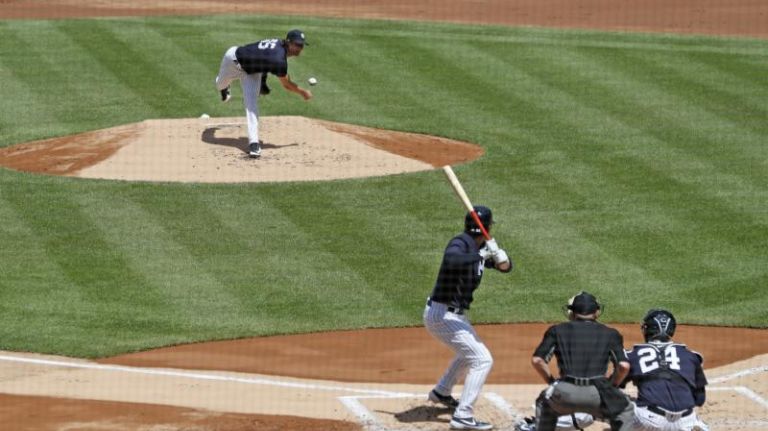 Right-hander Gerrit Cole threw 87 pitches in his final practice before Opening Day Thursday of the abbreviated 2020 MLB season. The Yankees’ new starting pitcher gave up homers to Mike Ford and Miguel Andújar in the fourth inning, but those were the only runs he allowed in 5 2/3 innings. Cole struck out seven and walked none.

Ford hit into the right-field bullpen. Andújar hit an opposite-field shot in the same direction.

“The back-to-back homers were undesirable from my perspective, just kind of got into a position there where I was spraying some breaking balls and just kind of became noncompetitive,” Cole said. “And I got in some fastball situations where I had to challenge, guys.”

Cole said the intrasquad game “presented a few challenges” but he “absolutely” feels ready for the Opening Day matchup against Max Scherzer and the World Series champion Washington Nationals.

All games leading up to Opening Day are part of MLB’s July Summer Camp and do not count toward the 60-game regular season.

On Friday, the Yankees welcomed back infielder DJ LaMahieu, who tested positive for Covid-19 before Summer Camp. LaMahieu warmed up on the field and got a workout in the weight room before the intrasquad game.

“Obviously everyone is very excited to see the machine back in the building,” Yankees manager Aaron Boone said.

Coaches have started putting a plan together for La Mahieu’s return to play, but when he will return is still to be decided based on evaluations.

“I don’t want to commit one way or the other, we’ll see how we are then next couple off days,” Boone said. “It would be a pretty quick turnaround obviously. First and foremost, we want to make sure we bring him back safely and smartly and when he’s back, he’s ready to roll.”

Yankees hitting coach Marcus Thames said LaMahieu is a “baseball rat, he knows the game, he knows the swing, he knows what guys are trying to do to him, but he’s still human” and needs to get some at bats and rest before he returns.

The Yankees’ pitchers have been ahead of the hitters. Thames acknowledged that the hitters “have a little ways to go” but that the players at bat have been better.

Players tend to put more pressure on themselves with the shortened season, but Thames said the coaches have been trying to keep them loose and taking one bat at a time.

“We have real pros, we’re going to make sure they’re … ready for the first game against Washington,” Thames said.

As the roster gets decided, outfielder Clint Frazier said he has learned not to worry about where he will be placed.

“I think it’s pretty natural to let your mind wander to those areas but something I’ve learned is to stop trying to play GM,” Frazier said, “I have a role, I don’t know what the role is going to be, I guess we’ll find out what all of our roles will be, but hopefully it’s one I can play a big part in.”

Frazier also confessed that his decision to wear a mask has drawn a lot of positive, as well as negative feedback. He said the criticism isn’t bothering him because he and his teammates need to stay safe to accomplish their goal.

“We want to win the world seri and the way to do that is to be healthy,” he said.

The Yankees play the Mets at Citi Field on Saturday and again on Sunday at Yankee Stadium, before wrapping up Spring Training with an exhibition game against the Philadelphia Phillies at Yankee Stadium on Monday. Opening Day against the Washington Nationals will reportedly happen at Nationals Park in Washington, D.C., instead of alternate sites that were explored due to the ongoing coronavirus pandemic.

First pitch for Saturday’s exhibition game against the Mets is set for 7:10 p.m. ET at Citi Field in Flushing NY.