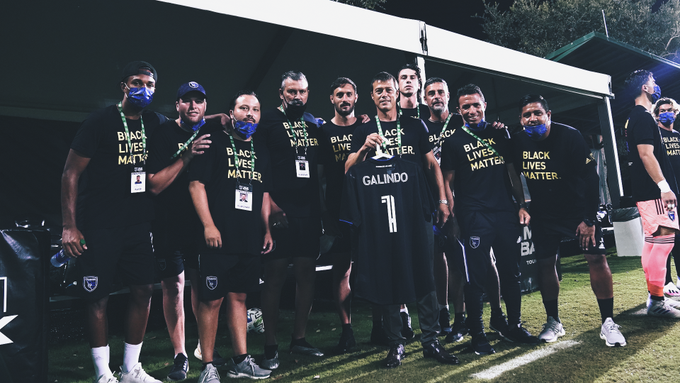 The San Jose Earthquakes gather before kick off to send a photo tweet to assistant coach Benjamin Galindo a get well after Galindo suffered a stroke and had brain surgery on May 28th. Galindo was in intensive care and was released home on Thursday in Guadalajara, Mexico . Galindo has been on the coaching staff since 2019. (@SJEarthquakes photo)

ORLANDO, Fla.—Soccer is back in America.

In muggy conditions, the San Jose Earthquakes and the Seattle Sounders FC played their first game in four months to a competitive 0-0 draw on Friday evening at the ESPN Wide World Of Sports Complex.

The MLS Is Back tournament has 24 of the 26 league’s teams competing in Orlando to restart the 2020 MLS season. The winner receives a berth in the CONCACAF Champions League in 2021. FC Dallas and Nashville FC were forced to withdraw from the tournament due to their players and staff having numerous positive tests for COVID-19.

San Jose, who were the first team to travel to Orlando 16 days ago, looked like the team most adapted to the humid conditions as they controlled play in the first half with a 63-37% advantage in possession against the defending MLS Cup champions.

The Quakes had two good scoring chances in the 24th and 25th minutes. Christian Espinoza made a move from the right into the middle for a shot that was saved by Sounders goalkeeper Stefan Frei. Then Vako’s shot from the left wing was also stopped by Frei.

San Jose looked to make a dent in the scoreboard late in the first half when Espinoza centered a pass into the middle, but Andy Rios’ attempt sailed just to the left of the goal in the 39th minute.

The Quakes defense played sound defense in the first half. With the exception of letting Cristian Roldan get behind them for a point-blank shot that Earthquakes goalkeeper Daniel Vega made a two-handed blocker save in the 28th minute, Seattle didn’t muster any other quality scoring chances in the first 45 minutes.

The second half saw Seattle increase the pressure in the Quakes defensive zone. Once again Vega made a point-blank save on Roldan in the 52nd minute.

The steamy conditions began to take their toll on both teams with many players suffering cramps in the last 30 minutes of the second half.

San Jose dominated the game with nine corner kicks to just one for Seattle. The Quakes had a chance to take the lead in the 83rd minute with their eighth of the match but were not able to cash in the opportunity.

Seattle’s best chance to break the deadlock came in the 84th minute when a centering feed split two Quakes defenders to a wide open Raul Ruidiaz inside the box but he hesitated on his shot attempt, allowing Vega to come out and make the save.

Despite a combined 28 shots on goal, both goalkeepers shined the brightest on the pitch for 98 minutes.

GAME NOTES: Quakes center fullback Guram Kashia left the game late in the match with what appeared to be a cramp in his leg.

One new quirk the tournament features is teams have the ability to make five substitutions instead of the normal three. San Jose used all five opportunities while Seattle used four.

This was the Quakes first match since March 7th when they lost to Minnesota FC 5-2 at Earthquakes Stadium.

UP NEXT: The Quakes take on the Vancouver Whitecaps FC on Wednesday 7/15 in their second match of Group B play at 7:30pm at ESPN Wide World of Sports Complex.