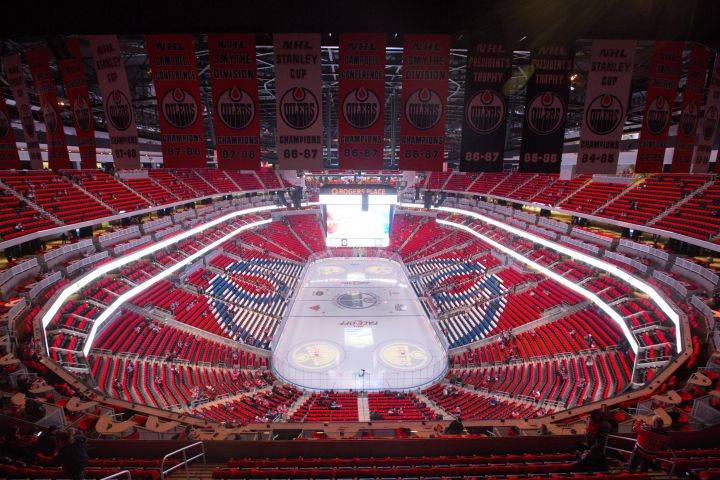 globalnews.com file photo: Rogers Arena in Edmonton which sits empty at the moment is vying for a chance to be one out of three Canadian cities to host the NHL Stanley Cup Playoffs

#1 There are a number of NHL players hesitating regarding returning back especially with the huge spike in Covid-19 cases in Florida 3,000 a day and how returning will be handled.

#2 Previously Canadian players can’t leave the U.S. because if they go home there is a 14 day quarantine involved. Also Nashville Predators general manager David Poile said there a number of players who have showed up for practice but the NHL is not mandating players to show up as practice is voluntary.

#3 Canadian Prime Minister Justin Trudeau said he would welcome the Stanley Cup Playoffs in the following Canadian hubs Edomonton, Vancouver and Toronto. Trudeau is set to waive the 14 quarantine and bubble the players in those venues for the players.

#4 Kaapo Kakko right winger of the New York Rangers had tested negative for Covid-19 and according to New York’s president John Davidson he’s been approved to play. Kakko has diabeties Davidson said he’s been tested and is ready to get in the line up.

#5 The Pittsburgh Penguins are 40-23-6 and are in the qualifiers with the Montreal Canadiens for the first round of the playoffs. They are said they most likely will start Matt Murray in goal. Murray is 20-11-5 with 2.87 goals against and an .899 save percentage.

Matt Harrington does Headlines podcasts each Saturday at http://www.sportsradioservice.com