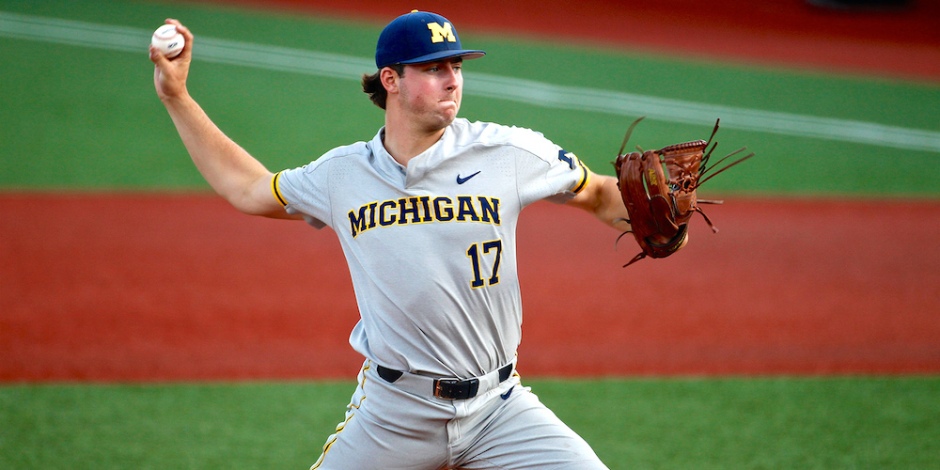 division1 file photo: Michigan Wolverines right hander Jeff Criswell who was selected by the Oakland A’s in the MLB draft the A’s will be taking a look at Criswell again once the players and MLB can reach an agreement

#1 The Oakland A’s went pretty strong in their opening pick with catcher Tyler Soderstrom last week although he’s going to have to go through the minor league system to get to the show it’s his bat that the A’s are looking forward to.

#2 In the later rounds of the draft the A’s also strengthened their future pitching core in selecting Jeff Criswell who pitched for Michigan. Criswell pitched against the Texas Tech Red Raiders in two appearances pitched in five scoreless innings for two saves in the College World Series.

#3 The A’s like Criswell who throws 97 miles per hour and has a wicked breaking ball that could very well be his bread and butter pitch.

#4 Criswell in warm up tosses outside of the bullpen has be rumored to throw 100 MPH, Criswell can hurl and with some minor league experience he might get promoted up to the show pretty quickly.

#5 Also the A’s selected from the University of Washington pitcher Steve Emmanuels who went 2.35 ERA, with 65 strikeouts, 22 walks, in 53.2 innings as a reliever.

Lewis Rubman is a Oakland A’s beat writer and filled in for Charlie O on Headline Sports podcasts heard with Charlie O every other Saturday at http://www.sportsradioservice.com