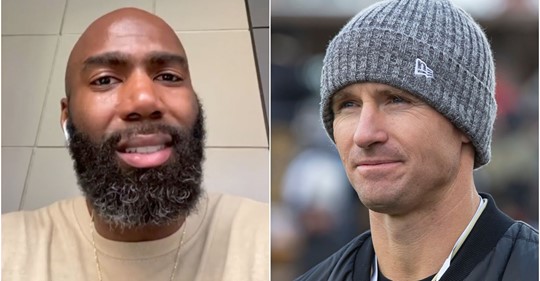 Malcom Jenkins safety for the New Orleans Saints sends out a message directly to Saints quarterback Drew Brees about how he got the message wrong about taking a knee. Brees spent Thursday trying to do damage control with apologies all around. (photo from espn.com)

#1 When football returns should the New Orleans Saints quarterback Drew Brees to demonstrate his sincere apologetic feelings about his saying the players are disrespecting the flag by taking knee should Brees take a knee himself?

#2 Brees has been heavily involved in the black community in New Orleans but said on Thursday that he needed to do more listening and less talking.

#4 Brees certainly didn’t expect the firestorm of criticism for his tweet saying his teammates and NFL players are disrepectful for taking a knee and that it’s an insult to the flag and the US military. Richard Sherman of the 49ers says that Brees has lost creditbiltiy and that Brees interjecting the military into the conversation is part of the problem.

#5 What’s the next step for Drew Brees now will he be able to be a team leader at quarterback for the Saints and help the Saints drive towards the post season? Or will he be pretty much persona non grata and the players will request not to play with him in anymore in NFL games?

London does Headline Sports podcasts each Friday at http://www.sportsradioservice.com