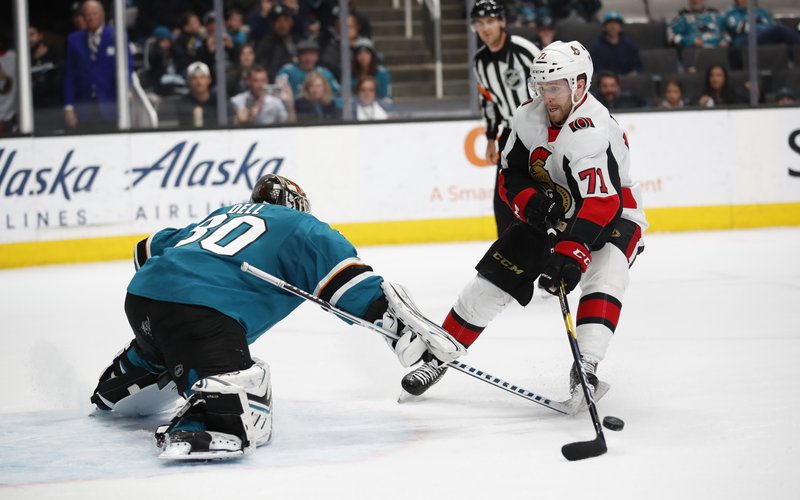 mercurynews.com photo: The Ottawa Senators Chris Tierney (71) tries to put the puck past San Jose Sharks goaltender Aaron Dell (30) during a penalty shot in the second period on Saturday night at SAP Center in San Jose

SAN JOSE- The San Jose Sharks fell 2-1 in overtime to the Ottawa Senators Saturday at the SAP Center. Ottawa goals came from Nick Paul and ex-Shark Chris Tierney. Goaltender Craig Anderson made 31 saves for the win. The lone Sharks goal came from Evander Kane, while San Jose goalie Aaron Dell made 36 saves in the loss.

After the game, the Sharks goalie said: “We had only a couple breakdowns. For the most part I think we played a really solid game. And we had a lot of chances, just bounced over our stick a couple of times, just you know some bad luck I think. One of those goes in, it’s a whole different game.”

Sharks defenseman Brent Burns was asked how he felt after getting 31.5 minutes of ice time. He said: “I feel great, I feel good. I think we’re all in the same boat. We all train for the summer to play more than what we ever play so it’s good. I get to eat more tonight now.”

The Sharks had the only power plays in the first period, one at 7:41, one at 17:11 and a third at 19:32. They got three shots on those power plays before finally scoring at the tail end of the period.

Evander Kane tipped a Brent Burns shot but that did not go through. Kane followed up and got his stick on the puck again to pop it into the net. Assists went to Brent Burns and Timo Meier.

The shot count for the period was 16-14 Sharks. San Jose also had a very good period in the face-off circle, winning 65% of the time. Joe Thornton, Evander Kane and Dylan Gambrell shared the bulk of those face-offs, each taking five draws.

In his first NHL game, Nikolai Knyzhov took the Sharks’ first penalty of the game at 4:28 of the second. The Sharks killed that off, allowing just one shot on goal.
The teams traded breakaways in the final few minutes of the second period but both goaltenders were up to the task.

Radim Simek kicked the puck into the net with 24.8 seconds left and the goal was immediately waved off. Simek then went to the other end and swept the puck away from the crease before it could cross the line. Since he closed his glove over the puck, that earned the Senators a penalty shot, taken by Chris Tierney. Dell attempted a poke check, and then Tierney lost control of the puck before he could take the shot.

By the end of the period, the shots were 10-9 Senators.

Both teams had good chances in the middle of the third period, including shots from Couture and Labanc in quick succession, without breaking the 1-1 tie. The Senators pressed hard in the final minute and Dell had to stop a great chance for Colin White in the final 20 seconds to get the game into overtime. The shot count for the period was 13-5 Senators.

Overtime did not last long, ending after just 35 seconds. Christ Tierney scored in a two on one after Anthony Duclair made a pass across the ice, around a sliding Brent Burns. Assists went to Duclair and Chabot.

The Sharks next play against the Colorado Avalanche on Sunday at 7:00 PM PT at the SAP Center.